Pennsylvania will lose one of its seats in the U.S. House of Representatives, the Census Bureau has confirmed, setting up a high-stakes redistricting process as Democrats and Republicans battle to protect their incumbents.

The bureau released its long-awaited state population totals Monday as part of the decennial count that determines the distribution of 435 congressional seats as well as Electoral College votes.

When the 2022 midterm elections arrive, Pennsylvania will have 17 congressional districts, as opposed to the 18 currently represented evenly by Democratic and Republican lawmakers. Pennsylvania will also lose one of its 20 Electoral College votes, further decreasing its clout during presidential contests.

The state’s congressional map is drawn by the 253-member General Assembly and must be approved by the governor. In 2011, both of those branches were controlled by Republicans. But this time around, the GOP-majority House and Senate will need to win the blessing of Democratic Gov. Tom Wolf.

Political observers expect a contentious debate between Wolf and Republican leadership, who are still at odds over the 2020 election and pandemic response.

“The first question is: Is anyone planning on retiring?” said Democratic political strategist Mustafa Rashed, president and CEO of the Philadelphia-based firm Bellevue Strategies. “Because if someone’s retiring, usually that’s the easiest thing to do — to reapportion their seat.”

Overall, Pennsylvania’s population grew by an anemic 2.4% between 2010 and 2020, topping 13 million people, according to data released Monday. More granular data won’t be released until August at the earliest, but recent census estimates showed growth in south-central and southeast Pennsylvania and declines essentially everywhere else.

That makes seats in western Pennsylvania a prime target.

The National Democratic Redistricting Committee, chaired by Obama-era Attorney General Eric Holder, released a statement calling for the 15th congressional district to be eliminated because of declining population. The seat is held by Republican Glenn Thompson. 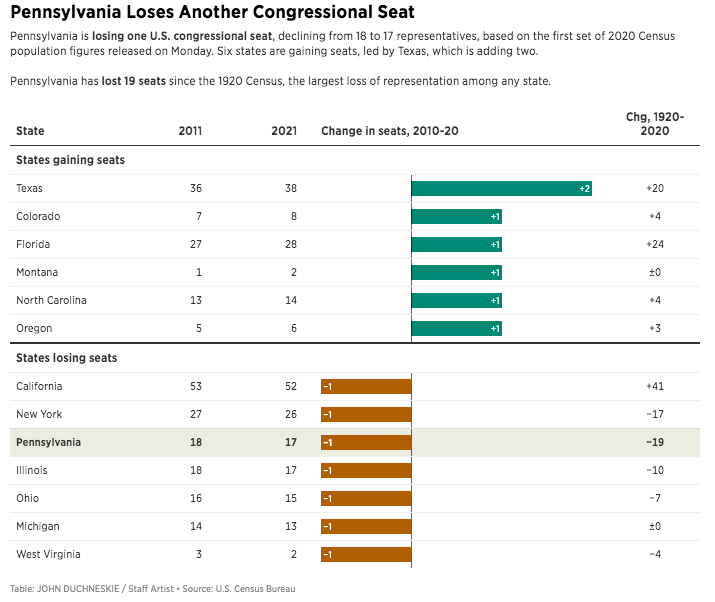 “I would suggest any plotting or drawing of charts is definitely going to take a very hard look at Conor Lamb’s district,” he said.

Roddy expects Republican mapmakers will look to draw Lamb and Democrat Mike Doyle into a district together, forcing Democratic primary voters to choose.

In Pa., redrawing the districts to correspond with population shifts identified by the 2020 census will have a particularly unpredictable effect on congressional districts.

In a fundraising email, the Pennsylvania Democratic Party expressed concern about the GOP targeting Lamb’s district, as well as those represented by U.S. Rep. Matt Cartwright in the northeast and U.S. Rep. Susan Wild in the Lehigh Valley.

Lawmakers’ ambitions for higher office could simplify Wolf and the legislature’s decision. Lamb, a Marine and former federal prosecutor, has been floated as a possible candidate for retiring U.S. Sen. Pat Toomey’s seat. Democratic U.S. Reps. Madeleine Dean and Chrissy Houlahan, both of the Philadelphia area, are also potential contenders.

“If you’re going to lose a seat, you may say, ‘I might as well go and do that,’” Rashed said. “If you think you’re going to have to compete against … one of your congressional neighbors, you may decide to go run for Senate.”

If Wolf and GOP leadership can’t agree on a map, the question will go to the Democratic-controlled state Supreme Court, which has played an increasingly consequential role in recent years.

The court in 2018 ordered the legislature to draw a new congressional map after finding the previous version “clearly, plainly, and palpably” violated the state constitution. That ruling stemmed from a lawsuit brought by the League of Women Voters and individual Democrats that called the map a partisan gerrymander designed to benefit the GOP.

Wolf rejected the map drawn by Republicans, and — after the two sides failed to reach an agreement — the court imposed its own version. While GOP lawmakers held 13 of the 18 seats before the ruling, the second map resulted in a 9-9 split among the parties.

That ruling, coupled with critical decisions during the 2020 election and coronavirus pandemic, have made the high court a target. Many state House and Senate Republicans have thrown their support behind a proposal to elect appellate judges — including those to the state Supreme Court — in districts drawn by lawmakers. Currently, those judges are picked in statewide contests.

Beyond the looming political fight, Monday’s announcement further solidified is a stark reality for Pennsylvania: Its sluggish growth and rapidly graying population is setting the stage for difficult economic decisions.

Pennsylvania has lost at least one U.S. House seat in every apportionment process since 1930 as it saw its population growth lag behind southern states like Florida and Texas. The state has similarly seen its presidential clout diminished in the 20th century, dropping from a peak of 38 electoral voters in the 1910s and 1920s, per 270toWin.

State Sen. Art Haywood said his bill — informed in part by the police killing of Christian Hall — would address the “appearance of bias” that erodes trust in law enforcement.

Representatives of Parx Casino and state Sen. Tommy Tomlinson have worked in lockstep to ban unregulated, slot-like skill games that pose a threat to traditional gaming.

A group of Pennsylvania Democrats is asking a state court to make preparations to take over congressional map-making duties.