Over the past five years, Victor Martinez has noticed more and more Hispanic-run businesses crop up on the route he drives to work.

Martinez owns La Mega, a Spanish radio station located right outside of downtown Allentown. During his commute from his Macungie home, he’s seen new restaurants, hair salons, and bodegas. One restaurant located five minutes from his station, La Bicicleta, opened only two years ago and its Venezuelan arepas are now among his mainstays.

The business boom reflects the rapid growth of Pennsylvania’s Latino population, which surpassed 1 million people according to the latest census — a 43% increase from a decade ago. The problem, Martinez said, is that growth in population has yet to translate into a rise in power and influence at all levels of government, in particular the state legislature.

“As soon as the census came out, leaders in the Hispanic community, in Allentown and Reading, started calling each other and talking to each other on [how] we need to make sure we involve ourselves in every district conversation,” Martinez said. “Now we have it on paper. Now we can go and express to governments that our community needs and deserves to have representation.”

To that end, Martinez has become one of the most vocal Latino advocates during this year’s redistricting process — a legally required redrawing of the state’s legislative districts based on the decennial census data. Far more than a bureaucratic exercise, redistricting can have enormous implications for which groups have the most voting influence in a given area, and which party — Democrats or Republicans — have the advantage come Election Day.

There are more than 3 million people of color living in Pennsylvania, and these communities have powered the state’s population growth. Their gains more than offset the continued contraction of the white population, which fell by half a million during the past decade.

In total, a quarter of the state’s residents now identify as non-white. Yet just 10% of the General Assembly’s 253 members identify as people of color. In 2015, that number was 9%.

That’s why advocates like Martinez are increasingly getting involved. They see redistricting as an opportunity for political maps and voting power to more equitably represent the growth of certain communities.

“There’s zero in the Senate,” he said, “and there are only four Latinos in the House of Representatives.”

Pa. lawmakers prepare for a month of intense redistricting negotiations

Lawmakers are already working against the clock. Pandemic-induced census delays meant they received the data to draw maps much later than usual.

To Martinez and other people of color, equitable representation is proven by a legislative assembly that is reflective of the demographics of the state. But demographic majorities, even in areas with minority enclaves, can be difficult to represent on maps due to communities being scattered or geographic barriers such as rivers or highways.

The law can also create hurdles.

Neither the Pennsylvania Constitution nor the U.S. Constitution explicitly requires that legislative districts demographically represent their constituents. The state constitution lists only three requirements: compactness, contiguity, and minimizing municipality splits.

Federal regulations regarding redistricting are outlined by the 14th Amendment and the Voting Rights Act of 1965. Citing the Equal Protection Clause, the U.S. Supreme Court has ruled that it is unconstitutional to use race as a predominant factor when drawing district lines.

Separately, the Voting Rights Act prohibits vote dilution of minority communities, meaning consolidating or dispersing a minority community with the effect of reducing its voting power. But proving dilution is a tall order under the law.

These protections can complicate efforts to create new districts and challenge current ones.

“Unfortunately, the only tool in the federal toolkit that we have is the Voting Rights Act to protect marginalized communities,” Fulvia Vargas-De León, an attorney with legal advocacy group LatinoJustice, said. “Pennsylvania, like many other states, does not have clear guidelines, aside from contiguity and compactness, in terms of how they draw districts.”

To address that difficulty, some mapmakers — such as the Legislative Reapportionment Commission, a panel of the top House and Senate leaders and an independent chair handling the General Assembly maps — have turned to “communities of interest” as an alternative.

These are geographical areas where residents have common political goals. But the commission’s commitment to this principle is not legally binding, and because outlining such communities requires public input and feedback, advocates worry that there will not be enough participation throughout the process to produce fully representative maps.

For Will Gonzalez — executive director of Ceiba, a coalition of Philadelphia Latino organizations — bringing such communities of interest to the attention of legislators is essential. For example, he said, Northeast Philly’s concentration of Latinos and Latino institutions, from nonprofits and churches to schools and businesses, must be kept together despite them not comprising a majority.

“In those places that do not rise to that level of 50% plus one, [we] must make sure that they don’t get cut and divided,” Gonzalez said. “We want to be able to have communities of interest, who share in meeting the challenges and taking advantage of the opportunities that might present themselves to their communities through a unified representation in their legislature.

“That’s why being part of the process in the beginning is really, really important.” 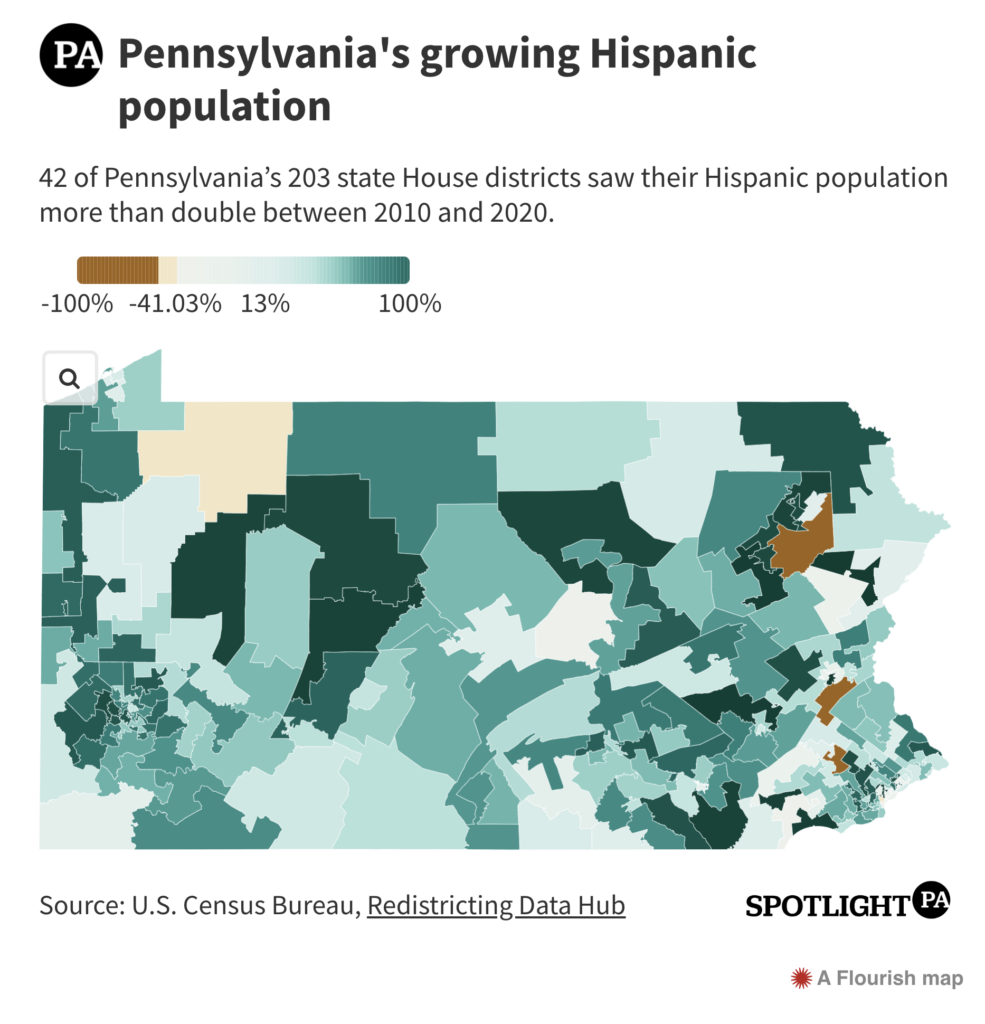 ‘Divided in so many ways’

Martinez has testified at three of those hearings, using Allentown — where 52% of residents are Hispanic or Latino — as his case in point.

Lehigh County currently contains seven state House districts, only one of which is a majority-minority district. That area, District 22, encompasses most of Allentown and is currently represented by Peter Schweyer, a Democrat who has held the seat since 2015. Martinez believes the three districts that divide Allentown unfairly split up the Latino population, and he hopes his involvement might improve them.

“We get divided in so many ways that we have no shot of representing ourselves,” Martinez said. “There is an opportunity to have someone that can represent us, that looks like us, that understands us, our culture, our community. And for me, that’s important because it means we’re in the room.”

Despite transparency vows, much of Pa.’s redistricting still takes place behind closed doors

The task of reshaping Pennsylvania's political maps falls to a small group of legislative insiders, a system that critics worry facilitates backroom deals.

Schweyer pushed back against the idea that a district shape alone can ensure representation.

“Communities of color as a redistricting principle is something that I strongly support,” he said. “I believe in representation. But at the same time, there’s no guarantee. We can’t just assume that just because we draw a [majority-minority] district — African American, Latino, what have you — that you’re going to guarantee somebody from that community is going to get elected.”

In Schweyer’s district, Hispanics account for 56% of the population, while communities of color make up over 75% of the district overall.

If Schweyer’s district were broken into two, for example, that could create more opportunities for Hispanic voters to sway elections. This approach could also benefit communities that are not geographically concentrated enough to constitute a majority.

Vargas-De León suggested that this approach might be more equitable, but the legality of such an approach is subject to debate.

Martinez’s participation in the redistricting process comes amid greater awareness of how consequential the process can be for communities. But to truly affect mapmaking and define communities of interest, Pennsylvanians must participate en masse in the process, something advocates doubt will happen for a host of reasons, from apathy to outright roadblocks.

While the redistricting commission has solicited testimony from more than 50 citizen witnesses and opened an online portal to accept comments, the ability to give testimony is still limited by language barriers and time, among other constraints.

Because of those hurdles, Vargas De-León has doubts that such a critical mass will step up.

“Historically, redistricting is one of the ways that we have affected the voting power of marginalized communities,” Vargas De-León said. “It’s one of the silent tactics of sorts, I would say, because it’s not obvious when it’s done. But it’s part of the toolbox to keep these communities disenfranchised.”

This article is part of a yearlong reporting project focused on redistricting and gerrymandering in Pennsylvania. It is made possible by the support of Spotlight PA members and Votebeat, a project focused on election integrity and voting access.

Wolf’s veto tally grew extensively during the pandemic and will likely expand during his final 13 months in office, as Republicans continue to largely bypass his agenda.

It’s a vision of election overload that would undercut Pennsylvania’s proportional, local representation in Washington, D.C.