In a live ABC town hall at Philadelphia’s Constitution Center Thursday night, Joe Biden took questions from an audience of Pennsylvania voters on issues ranging from the coronavirus pandemic, to the Supreme Court, to systemic racism.

It was something of a backup event — this was supposed to be the night of the second presidential debate, but in the wake of President Donald Trump’s COVID-19 diagnosis, organizers opted to make it virtual and Trump dropped out.

The president participated in his own, separate town hall in Miami, hosted by NBC. The events aired at the same time.

Many of the questions put to Biden were ones he has been asked before — and his answers weren’t much different. Pressed about the 1994 Crime Bill, which Biden authored, and which has become one of the more contentious points on his record among Democrats, Biden said, as he has in the past, that it was a “mistake.”

The bill was intended to stem rising crime; it has been largely blamed for contributing to mass incarceration and a rise in aggressive policing, all of which disproportionately affected Black people.

Biden defended it somewhat as a product of its time, noting the Congressional Black Caucus, for instance, supported it then. He also said the mistake was mainly attributable to “what the states did locally.” But, he concluded, it’s not a bill that would ever work now. “Things have changed drastically,” he said.

The former vice president continued to sidestep one of the questions that has dogged him most in recent weeks: will he expand — or pack — the Supreme Court if elected since it looks like there will be a 6-to-3 conservative majority if Amy Coney Barrett is confirmed.

Biden repeated that he is “not a fan” of court packing, but pressed on whether he’d definitively rule it out, he refused. It will depend, he said, on how Trump and the GOP-controlled Senate handle the confirmation process for Barrett. “It depends on how much they rush this,” he said. He went on to say he would give a more definitive answer before Election Day.

Asked by a young, Black self-described progressive voter why he should feel that a vote for Biden wasn’t just a vote for systems that “continually fail to protect them,” the former vice president gave a somewhat rambling answer, laying out several of the policies he and vice presidential nominee Kamala Harris have pitched.

A key solution, he said, is making it possible for Black Americans to gain wealth. That, he said, starts with strong, fair educational opportunities — and he particularly pitched putting $70 billion into historically Black colleges and universities. He also said he thinks bigger subsidies for first-time homebuyers, and startup grants specifically for Black-owned businesses will also reduce inequality.

There were few surprises on economic questions, either. Biden defended his plan to tax corporations and people making more than $400,000 per year at a higher rate. And he told Pennsylvanians, as he has in the past, that he doesn’t want to ban fracking, despite Trump’s accusations to the contrary.

He said he does, however, want to put money into making wind and solar energy cheaper, and create jobs covering uncapped wells in places like Pennsylvania. 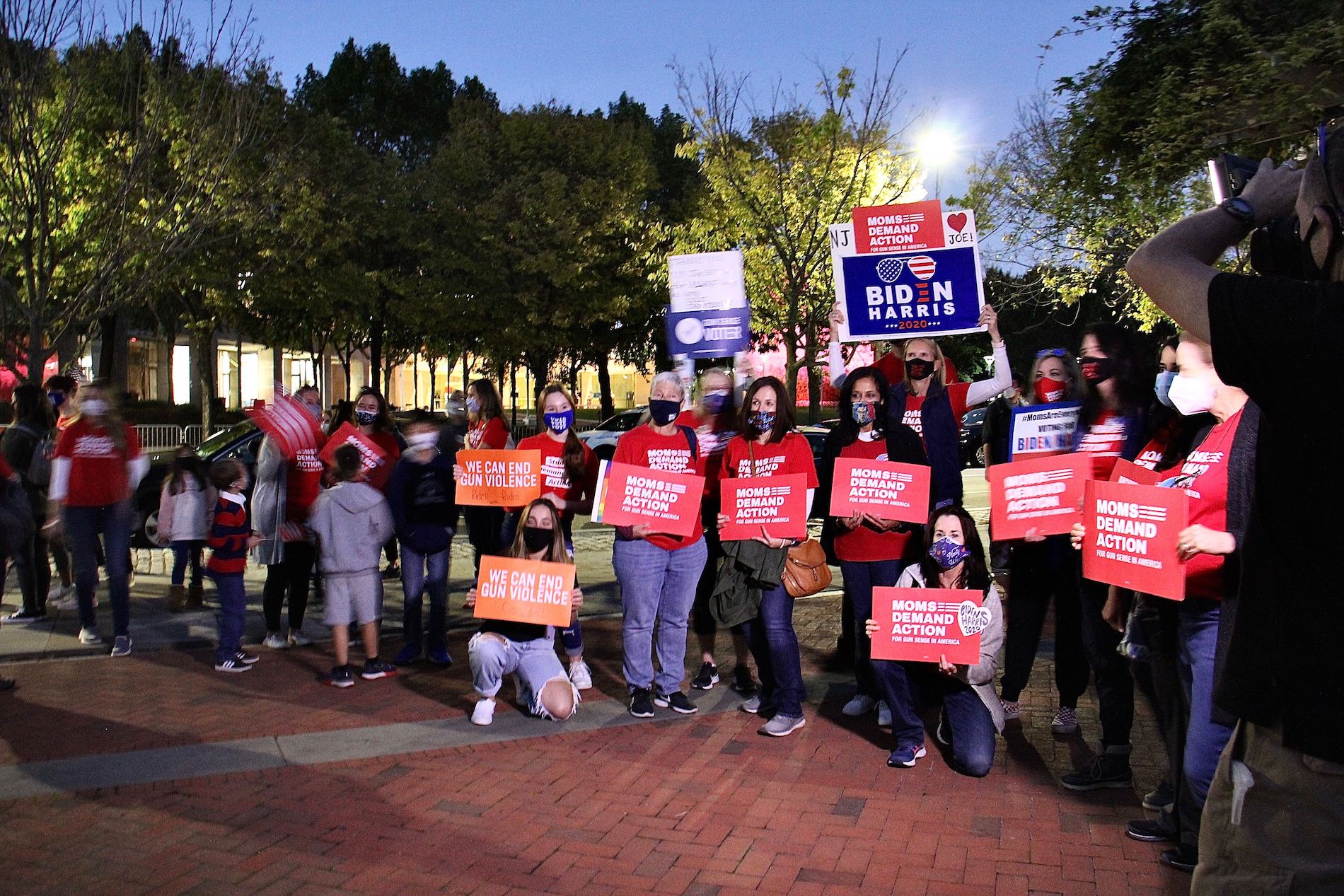 Members of the anti-gun violence group Moms Demand Action gather on Arch Street across from the National Constitution Center to show their support for Joe Biden. (Emma Lee/WHYY)

When Biden arrived at the Constitution Center around 7 p.m., a few dozen people were there to greet him. It was a starkly different scene than the one that had unfolded outside a similar town hall Trump participated in last month. Then a large crowd of Trump opponents and a smaller group of supporters clashed repeatedly.

This time, there was little protesting, save for a few Trump supporters who kept a low profile.

Michael Daino, who drives with Uber in Philadelphia but lives in Delaware County, showed up to support the president.

Many of the Biden fans were with the gun control group Moms Demand Action. Marybeth Christiansen, a Chester County-based organizer, said the group is nonpartisan, but it’s also focused on one issue. And on that one issue, she feels there’s only one good choice.

“We want guns kept out of the hands of people who aren’t permitted to have them,” she said. “Joe Biden has stood on the side of that argument for decades, and Donald Trump has made it darn clear that he’s in lockstep with the NRA.”

Others had more personal reasons for their Biden support. Cindy Leyva, who lives in South Philly and came out to Biden’s town hall with her husband, said she’s just hoping if Biden gets elected, she and her friends can stop having such charged arguments about politics.

“Some of my friends really are backing [Trump] because of the policies that he’s put in and the changes that he’s made, and I can understand some of it,” she said. “But it doesn’t have to be done with such language and such divisiveness.”

Ty and Donna Jenkins, a couple who live in Plymouth Meeting, said they’d feel better about the fate of their small construction business during the pandemic under Biden’s leadership.

“I think he’s the right man for the right time, he was built for this moment,” Ty said. “With all that we have going on, we need somebody who can show empathy and compassion. We know his story, we know he’s gone through a lot and he’s weathered it.”

Similarly to Trump’s September town hall, two dozen or so voters with a range of personal and political perspectives will be in attendance, and will have a chance to ask Biden about issues important to them.

Trump’s event centered on his handling of the coronavirus, which he denied he had downplayed at the start of the pandemic. The president also told one voter that he didn’t think the U.S. had a “race problem.”

Biden has lately faced stiff questioning about whether he intends to expand the U.S. Supreme Court — something about which he declined to give a firm answer in the first presidential debate. More recently, he said he is “not a fan” of the practice.

Your 2020 guide to voting in Pennsylvania

Pennsylvania is dealing with a huge mail-in voting spike, sluggish mail, a slew of lawsuits and mail-in-ballot laws that could change. Here’s what you need to know.

Conservatives have also recently spent considerable time recently disseminating a New York Post story that claims Biden met with an adviser to a Ukrainian energy company at the behest of his son, Hunter Biden, while working on Ukrainian policy as vice president. Significant doubts have been raised about the story’s validity, and Facebook and Twitter have taken the rare, controversial steps of limiting access to the story — citing concerns about its provenance.

Biden’s town hall comes as his campaign blankets Pennsylvania with ads, and embarks on a bus tour across the commonwealth in the final weeks before the election.

He is up by about seven percentage points in averages of recent Pennsylvania polls, but given how much the race tightened four years ago, analysts are still expecting a relatively close race here. Trump won the state four years ago by less than a percentage point, even though Hillary Clinton was leading late in the campaign.

During this election year, Biden has returned to Pa. repeatedly to help Democratic candidates even though he's been largely absent from campaigning in other pivotal states.

President Joe Biden says the “rest of the world is looking” to see who holds control of Congress after the upcoming midterm elections.

The speech will be delivered Thursday outside Independence Hall in Philadelphia, the White House said.