When a person goes into sudden cardiac arrest and collapses, someone may rush in to perform CPR in an effort to restart the heart. The Cardiac Arrest Registry to Enhance Survival, or CARES, says that each year about 350,000 people in the United States experience an out-of-hospital cardiac arrest; about 90% of them die.

To administer CPR to adults and teenagers, the American Heart Association recommends that a bystander use chest compressions — pushing hard and fast on the center of the chest — rather than the combination of chest compressions and mouth-to-mouth breathing health care professionals and those who have been trained might perform. In adults, heart attacks are a common cause of cardiac arrest outside a hospital setting.

But when a child suddenly goes into cardiac arrest, it’s often because of a breathing problem. Researchers at Children’s Hospital of Philadelphia suspected compression-only CPR might be less effective in youngsters, and so they decided to look into what seemed to be conflicting data on the types of so-called bystander CPR, compression-only versus mouth-to-mouth breathing, also known as rescue breathing. The results of their study were published in late August in the Journal of the American College of Cardiology.

“Fewer than 10% of children who experience cardiac arrest outside of a hospital setting survive. The rates of survival improve when a bystander performs CPR, but prior to this study, the frequency and type of bystander CPR in out-of-hospital pediatric cardiac arrest in different age groups was unknown,” the researchers say in the journal.

What do we know about COVID-19 in kids now?

After analyzing data from 2013 to 2019 on 13,060 out-of-hospital cardiac arrest situations in children under age 18 that were reported to the CARES registry, the researchers concluded that rescue breathing resulted in better outcomes for young patients. 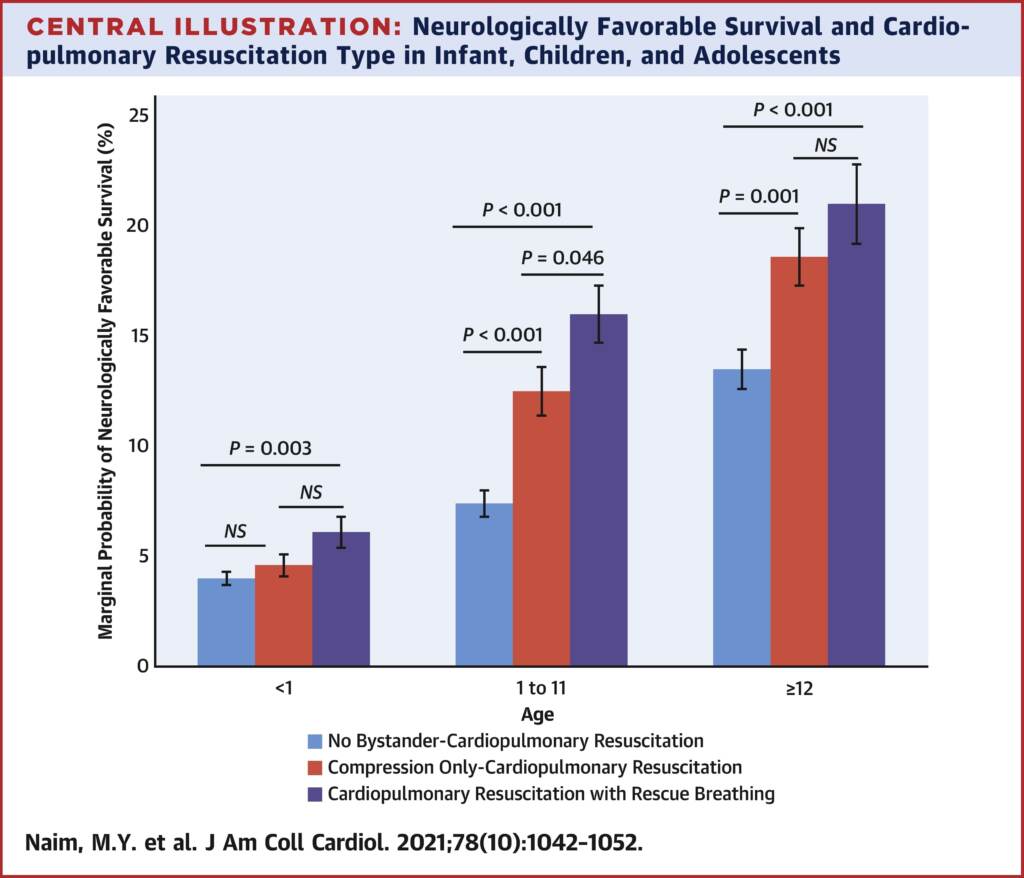 “For infants in particular, our study shows that CPR with rescue breathing is the only type of CPR that is associated with good neurological outcomes,” Dr. Maryam Naim, a pediatric cardiac intensive care physician at CHOP who was the study’s first author, said in an interview with WHYY News. “Infants who received compression-only CPR had similar outcomes to infants who did not receive bystander CPR.”

Add in the reality that only around half of children who experience cardiac arrest receive CPR at all. It would be best to start CPR as soon as possible because, Naim said, “without that, during a cardiac arrest, irreversible brain damage starts to occur five to 10 minutes after the cardiac arrest.”

Rescue breathing keeps oxygen flowing into the brain at a critical juncture.

Infants and toddlers are more likely to go into cardiac arrest because they have a breathing problem, which can be caused by an infection such as pneumonia or bronchiolitis. Premature babies can have issues where they may stop breathing or suffer from sudden infant death syndrome. A tween, however, may have a cardiac arrest that results from an undiagnosed heart issue.

“What happens in these cases is the cause [of] the cardiac arrest is secondary to low oxygen levels in the blood, which eventually cause the heart to stop working … that’s why rescue breathing is so important, especially in children such as infants,” said Naim.

Will the kids be all right?

In older children, she and her colleagues found, compression-only and rescue breathing CPR are extremely effective.

A cardiac arrest tends to look like a seizure, she said. Most cases of cardiac arrest may happen at home with infants, or with older children at school or where kids are exercising or playing a sport. So, it’s important for parents, children, and coaches to learn CPR and rescue breathing and be able to identify cardiac arrest, she said.

“Our work to prevent cardiac arrest should go hand and hand with organizations like the American Academy of Pediatrics that’s trying to prevent sudden infant death syndrome, so I would say that some of the strategies that have been recommended are safe sleeping practices, which include not co-sleeping with a baby, having the baby on a separate surface in the room with a parent, so that if they do stop breathing, it would potentially be witnessed,” said Naim.

Older children should be screened for heart issues, heart muscle problems, and heart rhythm disturbances in family history, she said.

Pa. coronavirus update: Children’s Hospital of Philadelphia to mandate vaccines for all employees

While the Children’s Hospital of Philadelphia had planned on waiting until the vaccine got “full FDA licensure,” the rising threat of the delta variant upended those plans.

The gift will fund expansion of the delivery unit, creation of a birth defects biorepository, and a position in pediatric surgical science.

The study shows children and adolescents with the disease have a highly activated immune response, similar to that of adults with severe COVID-19.