Management at Philadelphia’s luxury Parc Rittenhouse sent residents of the complex the link to register for vaccine appointments at the massive new site operated by FEMA at the Pennsylvania Convention Center. Appointment invitations were intended to go only to certain essential workers, and the link was not meant to be shared by those who received it.

In the email sent to residents Monday in which he shared the link, Parc Rittenhouse building manager Jeffrey Webb also wrote that the building will be “arranging for a local pharmacy to schedule a vaccination clinic on site shortly.” 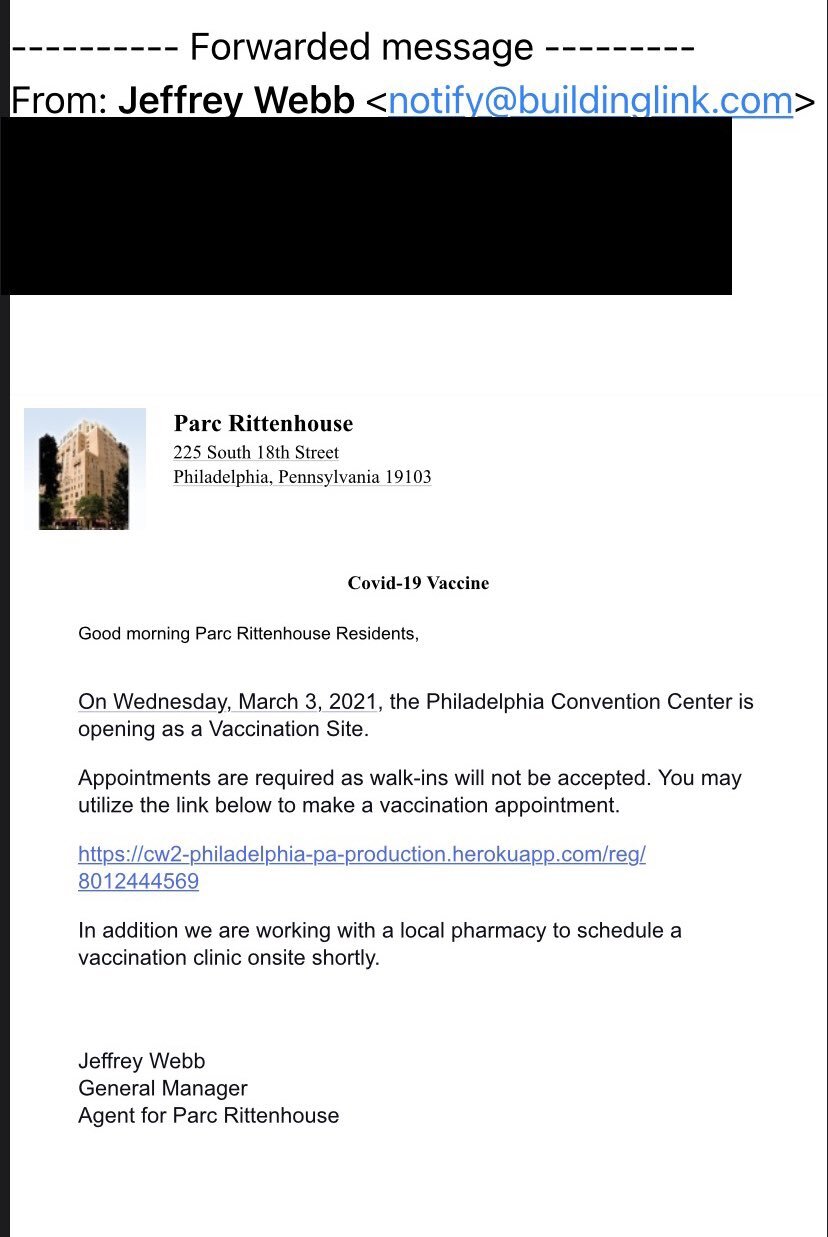 When contacted by WHYY News, Webb declined to comment. It’s not clear how many residents in the 266-unit building were able to schedule appointments through the link for the FEMA clinic.

The city has said it purged hundreds of unauthorized sign-ups coming from people who were not eligible. Nowhere on the sign-up sheet were eligibility requirements outlined, and the Department of Public Health has said it is working on a technical fix to prevent future links from being shared with unintended recipients.

Parc Rittenhouse was developed by City Councilmember Allan Domb, who owns a dozen units in the building and sits on the condo board. Domb said that he wasn’t aware of the email, but that anything going around should have included the city’s prioritization scheme, which the Parc Rittenhouse message did not.

Domb has been a staunch proponent of mass vaccination sites in Philadelphia, pushing the Kenney administration to open one at Lincoln Financial Field. He criticized the administration for placing too much emphasis on partnerships in the vaccine rollout and not operating out of a centralized city system, which Domb said would give the Health Department a better handle on equity and volume of distribution.

“We went into this process providing to third-party providers the vaccines,” Domb said. “We hoped and prayed they would do the right thing. Many did, a few did not. You can’t give up control — you need to control it.”

The Parc Rittenhouse communication is part of the latest trend in the mad scramble for COVID-19 vaccines: Apartment buildings and condo associations across Philadelphia are arranging vaccinations for their residents. In many instances, health officials and experts view this as a good thing: It increases access for seniors and other high-risk groups that may have trouble seeking out the vaccine on their own. But trusting vaccine providers to determine eligibility outside of city control also leaves the door open for the most vulnerable people to get skipped over.

The city Health Department is encouraging pharmacies and other vaccine providers to partner with community groups, including apartment and condo buildings, to distribute the vaccine where it’s convenient for people to get them, especially if many residents are seniors and may have mobility issues. Department spokesman James Garrow said it’s incumbent on the vaccine providers to make sure the doses are going only to those who are eligible.

“Our agreement with them is they can vaccinate whomever they want, wherever they want, as long as they’re following the current prioritization scheme,” said Garrow.

Right now, that means people in Phases 1A and 1B: health care and other essential workers, those with chronic conditions, and those living in congregate care settings.

The trouble is some apartment complexes are interpreting all of their residents to be eligible, regardless of age or health status, by virtue of living in “congregate care” settings. That designation is not intended for private residences such as apartments, Garrow confirmed. Instead, it’s meant to refer to prisons, homeless shelters, drug and alcohol treatment centers, psychiatric facilities, rehabilitation centers, and specialized services housing.

Getting everybody signed up

In Fairmount, 2601 Parkway is vaccinating its residents, many of whom are seniors, through a nearby independent pharmacy.

“The good news is that everyone in 2601 Parkway will be able to receive the vaccine,”  community manager Angela Nordstrom wrote in an email to staff, tenants, and apartment owners. “As our residents, staff, contractors, home health aides, and other domestic workers are living and working in close proximity to each other, all persons living and working in the building are eligible, regardless of age.”

Nordstrom instructed people to skip the eligibility section of the form included in the email.

“There is a section to confirm your ‘phase eligibility,’ but as above-mentioned, all residents and staff qualify; therefore, Parkway Pharmacy stated that part of the form does not need to be completed,” she wrote.

Dennis Czerw, a pharmacist at Parkway Pharmacy, said Thursday that he and 2601 Parkway had planned to vaccinate the residents, thinking that condo buildings counted as congregate living. The city Health Department called him Tuesday night to clarify that condos do not count, he said. Czerw then worked with building managers to send a new email to residents saying they could only be vaccinated if they were eligible under the city’s current vaccine phases, and included a form for them to show in which group they would belong.

Centennial Pharmacy, Philadelphia’s largest independent pharmacy chain, has been vaccinating people in various apartment complexes in the city, including properties acquired by the U.S. Department of Housing and Urban Development, said owner and operator Lindsay Dymowski. Centennial already does on-site flu vaccine clinics because many of the residents it serves are high-risk medically, older, or cannot leave their homes easily. Anyone in the city can sign up for a COVID-19 vaccine on the pharmacy website either for themselves or to request a group vaccination clinic. Some apartment complex managers requested vaccines for their residents in the current priority groups.

The Centennial chain is responsible for distributing 16% of Philadelphia’s more than 80,000 pharmacy doses, according to city data, and Dymowski said her team members have vaccinated more than 5,000 people in the past few weeks. They did some of those shots by going floor to floor in apartment buildings. She said her team checks so it vaccinates only those who fall into the current priority groups, which means at times refusing a vaccine to people who are ineligible and cannot get vaccinated alongside their neighbors.

“It hurts to tell people that we can’t vaccinate them at this time, but we have to make sure that we do everything fairly,” Dymowski said. “We will get to everybody I promise … but we need to do it at the right time.”

Dymowski said the team at Centennial Pharmacy has prepared for handling and giving out vaccines for months, which included spending thousands of dollars on freezers to store the Pfizer vaccine, training the staff, and reporting vaccine doses to the city, the state, and the Centers for Disease Control and Prevention. But she said all the late nights at the office are worth it.

“It’s without doubt the biggest project that we have ever taken on,” she said. “You can’t explain what it is like to be able to vaccinate someone and have them be so grateful and so thankful, and hearing these stories and seeing people cry because they’re going to get to see their family, or a grandma is going to get to see her grandchildren.”

On Tuesday, Centennial Pharmacy vaccinated photographer HughE Dillon along with hundreds of senior residents and home health aides in his apartment building, the Philadelphian at 2401 Pennsylvania Ave.

Dillon said that many years ago, he and his husband compared the building to a cross between a cruise ship and senior living because most residents are seniors and the building has so many amenities that cater to them, such as a restaurant, doctors offices, a drugstore, and a supermarket. That has also meant the residents have been hit hard by the pandemic, however. Dillon was infected himself in March of last year, and at least six residents have died.

That meant he was pleased and impressed to see Centennial Pharmacy vaccinate all the eligible residents of his building, floor by floor.

“I would love to see them do it block by block; it’s so efficient,” Dillon said. “My neighbors are so excited, some were crying, cause now they’re going to see their grandchildren, some were just so happy to be able to go outside and walk around, it was really beautiful, I hope they can do this for everyone.”

He tweeted about it, which prompted a big stir, and some accused Dillon and his neighbors of jumping the vaccine line.

“I was acting from a point of, I thought people knew this,” Dillon said. “I am a little angry that … people didn’t know that [signing up with pharmacies] was a possibility.”

In an interview with WHYY, Kamala Harris talked about Philly’s FEMA site and balancing the need to get shots into arms with the need to do it fairly.

Alison Buttenheim, associate professor of nursing and health policy at the University of Pennsylvania, has been watching all this play out.

She suggested that the city or state create a central registry of all vaccine providers, along with appointment availability and how to sign up, so people wouldn’t have to check the websites of individual pharmacies. She noted that Massachusetts has created such a site.

Pennsylvania lawmakers have proposed legislation that would create a statewide database of people who want to be vaccinated.

“The problems we’re facing now are decades in the making,” Buttenheim said, adding that short spending on public health is what has led to the current chaos: a lot of money and effort spent on developing and making a vaccine, but far less spent on how to get it to people.

Add to the mix poor choices when it comes to seemingly mundane logistics, like how to design sign-up systems, and you end up with efforts to make the vaccine accessible looking like ethical dilemmas.

Garrow, from the Health Department, said the chance that some ineligible people are vaccinated along with those who are most vulnerable comes part and parcel with partnering with community groups that may be able to offer better access to those who have mobility issues or wouldn’t be comfortable getting it elsewhere.

“Every time you have a partnership with folks, there’s an opportunity for someone not to follow the rules,” he said. “It’s a risk.”

This article was updated to include a comment from Parkway Pharmacy.

If you don’t want to give COVID-19 for Christmas, experts recommend the bivalent booster

Just under 14% of Pennsylvanians, age five or older, have gotten the shot, according to data from the Centers for Disease Control and Prevention.

Gathering again? Tips for a safe and healthy Thanksgiving

Here are some tips to keep everyone safe and healthy this Thanksgiving, from cooking the turkey to avoiding the 'triple-demic.'

Doctors warn of flu, RSV, and COVID ahead of Thanksgiving

Doctors say COVID-19 is not the only concern this year. They are seeing a rise in cases of RSV and flu.