Since being ordered to stay home to slow the spread of the coronavirus, my friends have been asking me, as we all ask each other: “How are you doing?”

I generally reply that it’s challenging for me to be, all at once, a full-time magazine editor, wife, cook, scheduler and a mother of two, which now requires me to be both a first and fifth grade teacher. I also throw in that I’m the “butcher, baker and candlestick-maker,” because I don’t want to seem whiney.

But, we’re all in the same boat, sitting six feet apart. And I have to say, I’m probably more fortunate than most. For instance, I haven’t been furloughed or laid-off, and neither has my husband.

I’m also lucky to have coworkers and managers who are immensely patient with my 7-year-old daughter, who has been making daily appearances. Every. Single. Videoconference. It’s probably a good thing she’s cute, but I feel like that BBC professor, who was on live television when his kids barged into his office.

My boss showed my daughter a few guitar chords last week. I realized then that the interaction may be as good for my coworkers as it is for my daughter. Nonetheless, it’s exhausting trying to perform work with two young humans who are used to having someone’s attention all day (insert here my gratitude to teachers).

The kids want to tell me what they’re doing, ask what they should do next, and then complain about boredom. That takes up the time until lunch. Meanwhile, I’m still conducting interviews, hopping on video conferences and editing.

Coronavirus: What keeps me inspired during my time at home.

Marnie Johnson loves to look out her kitchen window. And it’s what she sees in her yard that keeps her productive and inspired.

To keep them occupied, I’ve copied and pasted untold links to educational resources. So far, my kids have toured the British Museum, my daughter went to the National Aquarium, and they both bailed on me halfway through Valkyrie from the Metropolitan Opera. I’ve got my fingers crossed that they’ll stick with me for a Shakespeare webcast from the Globe Theatre, but I’m not betting on it.

It’s becoming evident to me that they will not follow my footsteps and pursue a degree in English. That’s probably both a good and bad thing: good for their future income, bad for me leading their education.

These past few weeks, I have been reminded of why I did not go into teaching. And yet, here I am, now a homeschool teacher.

Grammar I got. Journaling, I’ve suggested. Writing letters to their grandparents would be nice. All of these have been summarily rejected. If I’m lucky it is polite “No, thank you.” If I’m not lucky, it’s “Mooooooommmmm, noooooo!” 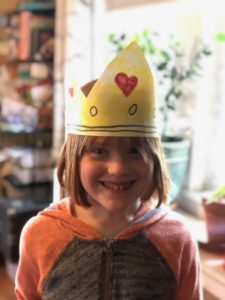 Currently, my daughter’s favorite academic tools are Moby Max and SplashLearn, which allows her to have fun while learning math. She quickly got bored with her grade level and her teacher was understanding enough to move her up to second grade (teachers aren’t providing lessons yet, but they are encouraging students to use these programs independently).

That’s when the addition and subtraction of three-digit numbers came in.

When she asked for my help, I was at once relieved that she hadn’t surpassed my own math skills. But I imagine that will happen next year.

She asked me how to solve the problems and I told her to write them down and I showed her how to “carry the 1” and “borrow 10.” She was successful and squealed with delight. Seriously, she squealed. I was walking on air!

Then it occurred to me — was I teaching her “old math?” Is this the way they’re doing it now? I think maybe it’s not. But is it bad to teach the other way? The “new math” works in groups of 10, right? I can do that. In fact, I thought the concept was genius and started using it myself. But when it gets to three digits? That’s above my paygrade.

I try to stay away from math concepts now.

My son is learning about quantum physics and chemistry on Khan Academy. I’m not getting anywhere near that.

He’s also taking on Japanese — thank you “My Hero Academia” manga. However, having taken German in college, I have no idea if he’s learned anything there, either.

In fact, I have no idea if they’re learning anything related to what they were being taught at school. But does that matter? What does matter right now?

I mostly let the programs do the academic work and then get a little more hands-on with the “specials,” or as I call them, the good classes.

For art class, my daughter has been drawing along with Mo Willems, the award-winning children’s author. It’s been great. And she’s been so excited about it. She even took a notebook out for a walk this week because Mo Willems said he sometimes gets book ideas when he’s outside walking.

The tentative title for her first story is “The Book of Living Flowers.” It was originally “Trees” instead of “Flowers,” but she’s decided that the book is going to be about the flowers trying to take the story away from the trees.

They’ve both painted rocks for a rock garden my neighbor asked for help with — from an appropriate distance, of course. My son claims art theft by his sister on one design, and we haven’t gotten to any law classes yet, but I don’t think he has a case.

I’ve also added a home economics class. Last week, my daughter made jambalaya and we tried a quick bagel recipe. This week it was gnocchi. Next up is bread.

She loves cooking and it’s the one area where I feel like I’m qualified to teach. It’s also a bright spot in our schedule, so I shift my work hours to accommodate that time.

For gym class, I drag them outside for a walk with friends. Well, my daughter usually skips out to the sidewalk, it’s the tween who is reluctant. Nonetheless, we walk. Six feet apart, we stretch across the street and down the block. We get to chat, and start the day seeing familiar faces, as we would at school drop-off or at the farmer’s market. It’s strange, though, because we can’t hug. We always hug.

My daughter saw one of her besties on the street and they took off running toward each other. The other mom and I shouted for them to stop. We both felt like we were walking puppies and needed to stop from wrestling. They just looked at each other crestfallen.

We all miss hugs, which is why I shouldn’t complain about the many hats I wear. Because the one that’s mom gets the cuddles.

Having the kids around 24/7 is difficult. But I have my family here. Under this roof. Healthy. Loud. Super loud.

April Hall has worked as a journalist for more than twenty years, working as a freelance writer for newspapers, magazines and websites. She’s currently a senior editor at MLR Media.

Becoming a storyteller for WHYY, your local public media station, is easier than you might think. Text STORYTELLER TO 267.494.9949 to learn more.

Some school systems around the country have moved to bolster staffing to minimize disruptions. But many are hoping for the best without doing much else differently.

COVID cases on campus are up nearly 60% in the past month. As a result, the semester will end with students and staff required to mask up.