This article originally appeared on The Philadelphia Tribune.

City Controller Rebecca Rhynhart believes the city can do more to reduce gun violence — and for less money than what it currently spends.

She released a report Thursday that shows the city is spending a total of approximately $15 million on the Youth Violence Reduction Partnership, the Community Crisis Intervention Program, blight remediation and street light upgrades, gunshot detection cameras, payroll for employees of the Office of Violence Prevention, and other grants and programs.

“The majority of this is not being spent on the type of laser-focused programs that are shown to work,” Rhynhart said. “This is why we thought that transparency was needed.”

She said a combination of three programs has worked to reduce gun violence in Chicago, New Orleans and Oakland, and implementing those same programs here in Philadelphia would cost approximately $11 million in the first year and less in subsequent years. “With the city’s cash balances, $11 million per year is doable,” she added. 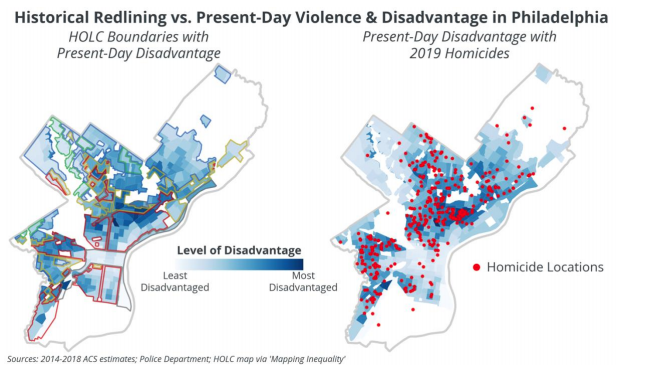 Rhynhart realizes her role is typically regarded as one focused on accounting, and that her proposal differs from the mayor’s “Roadmap to Safer Communities.”

“Anyone can get mad at me for being in the wrong lane, but you know what? I don’t care,” she said. “People are dying. I’ve stood on the sidelines for two years on this issue while people kept dying and dying. So you know what? I’m going to lean in and do what I can do. And if the mayor gets upset, I can’t control that.”

Mike Dunn, a spokesman for the mayor, said Rhynhart is “stepping into an area she not only knows little about, and has done little research on, save for a report that puts a dollar amount on every homicide as they relate to property values.

“Our violence prevention and reduction teams are working hard every day with actions and programs inherently based in evidence, and successful models that have achieved violence reduction in many big cities across the country,” he continued.

“Addressing the violence is the Kenney Administration’s top priority. Our work is guided by experts in the field who have rich experience with some of the leading names in violence prevention. The Philadelphia Roadmap to Safer Communities is executed by a public health approach, informed by data and research on what works for gun violence prevention.”

Mayor Jim Kenney has committed to slashing the homicide rate by 30% and shootings by 25% in four years.

He introduced his “Roadmap to Safer Communities” at the beginning of 2019. The plan proposes to address gun violence by addressing poverty, and calls for improved workforce development initiatives, reentry programs, prevention and intervention programs, and a public health campaign. The plan also focuses on blight remediation efforts.

The number of homicide victims in 2019 was the highest it has been in 12 years, according to Philadelphia Police Department statistics.

She said, “We have to focus on the violence.”

A similar combination of programs in Philadelphia could lead to a 35% reduction in homicides over five years, Rhynhart said.

The city’s poverty rate and homicide rate are intrinsically linked, Rhynhart said, and both are rooted in systemic — and even codified — racism. 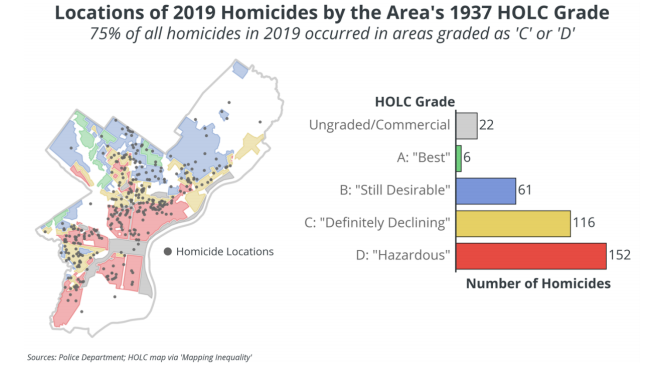 The sections of the city where most of the shootings occurred in 2019 were in areas that were redlined more than 80 years ago — Northwest, North and Southwest Philadelphia.

The federal Homeowners’ Loan Corporation designated those historically Black neighborhoods in the city as “undesirable” areas to lend money for mortgages and business loans, and “set the stage for a lack of investment” in those neighborhoods, Rhynhart said.

“These redlining boundaries are correlated with present-day disadvantage. They basically starved wealth creation from African-American neighborhoods.”

Society collectively created the problem, Rhynhart said, and “we have a collective responsibility to fix it.”

Philadelphia’s City Controller is establishing a community council to assist in a review of the city’s police department.

Philadelphia’s City Controller and a member of City Council are at odds with how Mayor Jim Kenney is handing the uptick in Philadelphia murders.