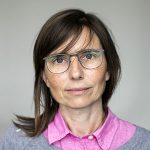 A few months ago, my family and I packed up our house in a Philadelphia neighborhood crowded with rowhouses and concrete as far as the eye can see and moved to a picturesque property about six miles away in East Germantown.

It’s a lot like having our own private park in the city. When I first saw it, I was in awe of the many vines climbing up and draping off the giant trees, but that quickly turned to concern as I realized this was probably not a good thing.

I asked Karen Flick, landscape manager at nearby Awbury Arboretum, to come visit, so I could get a better idea of what we were dealing with. Together, we walked the yard, a little over an acre, and looked over the several dozen trees.

“They’re also all older trees, from what I can see,” said Flick. She explained that most trees are measured by what is called diameter at breast height. Going by the looks of them, they’re are all about two feet and bigger, which is considered a heritage tree. It makes them very valuable for the environment and probably close to 100 years old or older.

We came up to one tree that appeared almost like a different plant altogether because of the vine that had grown on it.

“Most people looking at that would think the branches coming off it are actually the tree itself,” Flick said. “What we’re actually looking at is a hemlock tree, which is our state champion, and it’s covered in English ivy. And the English ivy has reached its stage of maturity, so it’s also covered in berries.”

A lot of the vines throughout the yard are also extremely old. As we walked up to another tree, at least three feet in diameter, Flick realized it was an oak covered all the way up just about to the tip of the branches in English ivy.

“It almost looks like a green sculpture,” Flick said.

I was surprised that the vine strangling the tree was English Ivy, but then learned that when it reaches maturity, the ivy actually changes form. This vine had basically developed a trunk form with branches coming off it, just like the tree, and it was able to reach maturity because it was on a stable structure.

But the tree is compromised, Flick said. “Now the English ivy will actually grow into the bark of the tree. It will weaken the tree. And really … it’s a hazardous tree at this point. It’s completely covered.”

When asked if it was too late to save the tree, Flick said, “I would never want to say that, but it is dangerous and something does need to be done about it.”

What exactly needed to be done here? The obvious answer to me was … goats. Enter Karen Krivit and the Philly Goat Project.

Krivit and her daughter, Lily Sage, began the Philly Goat Project one-and-a-half years ago, with community-based programs that include yoga, therapy and grazing. The goats live nearby at Awbury Arboretum.

They arrived at my place along with Don Green, the head of the grazing department, in a minivan with four big goats. Krivit introduced them.

“We have brothers, Teddy and Ray, they’re Nubian goats. And then we have sister and brother Oonagh, which means `Queen,’ and Oliver, and they’re our grazing team. They’re like the power eaters. They love tearing anything that’s a green, leafy thing that’s high. They don’t like to eat low.”

The goats came to eat, which is what they do best. They’ll consume 25% of their body weight every day in roughage, and they can eat things like poison ivy. If the goats were able to clear off the majority of the English ivy at the base and part of the mid-shaft of the trees, then landscape crews could come in and much more easily identify which vines needed to be cut and tear them down.

I asked Krivit what she thought most people imagine when they think of grazing goats.

“Everyone thinks they’re lawn mowers,” she said. “And we kind of explain that they’re more like weed whackers that clear the jungle green so it’s easier for landscapers. They’re kind of revealing what’s underneath. It’s kind of like taking the clothes off of the tree.”

As the day wore on, two goats got full and were swapped out for smaller ones. Some were wearing sweaters, and at that point I nearly died from all the cuteness, and then one of them jumped on the back of my friend and hilarity ensued. But I digress.

Before the goats finished grazing, I asked Lily Sage, Philly Goat Project’s assistant director, what she thought about my trees. Her answer really summed up my feelings.

“Each one has a bunch of other trees around it. They’re sort of in conversation with one another and they all kind of dance around the house, which is a really lovely way to live. It is like a tree dance party. So it would be a real shame for any of them to fall or need to be removed from the party. It would kind of leave like an empty hole,” she said.

Now that the goats’ job is done, the trees are one step closer to freedom.

“One of the reasons why we work with animals is when you work with an animal, it’s impossible to be anywhere but present because they aren’t in the past and they’re not thinking about the future,” Sage said. “Trees are very, very similarly grounding, but they also connect us to our history and our future in ways that animals can’t do but can preserve.”

With the leaves stripped and eaten, a landscaper can chop the vines at their base and the trees will dance on.

More segments from The Future of Trees

On the tree farm, a Christmas favorite thrives. In the wild, it struggles

More segments from The Future of Trees

On the tree farm, a Christmas favorite thrives. In the wild, it struggles

A big power pack with a goal of sustainability in Philadelphia

A public information session sought by the community laid out the details, and clarified who is responsible for cleanup of the contamination.