The United States has more than 50,000 contact tracers for the first time since the coronavirus pandemic hit, according to a survey of states conducted by the Johns Hopkins Center for Health Security in collaboration with NPR.

“I see us inching up in terms of increasing the contact tracing personnel, [though] still only really halfway to where we need to be,” says Danielle Allen, director of the Edmond J. Safra Center for Ethics at Harvard University, and a co-author of a handbook of COVID-19 policy. This latest survey shows a nearly 30% increase from NPR’s last survey in early August, which found 41,122 contact tracers across the country, but some of that increase is due to the fact that more states are now included.

Contact tracing staffing “feels stagnant,” says Crystal Watson, a senior scholar at the Johns Hopkins Center for Health Security. She oversaw the survey in collaboration with NPR. “I don’t see a lot of evidence that we have a new push or renewed interest in trying to prepare for what we might see this winter,” she says, “and we’re already seeing cases tick up across the U.S. and in Europe.”

Here are six takeaways from this latest survey

Only a handful of states currently have enough public health workers to investigate their coronavirus cases, according to an NPR analysis. This has been the case each time NPR has surveyed states. This time, only Oregon and Vermont and Washington, D.C. have enough. Four more states — Maine, Montana, New York, and Hawaii — have enough when reserve staff are included. And 44 states fall short of need.

The analysis, based on state case counts over the past 14 days, was done using an estimating tool developed by The Fitzhugh Mullan Institute for Health Workforce Equity at the George Washington University. As in June and August, NPR assumed workers are calling 10 contacts per case and that tracers reach 45% of contacts and follow up with them every other day — a conservative estimate, to reflect the real-world challenges health workers face. 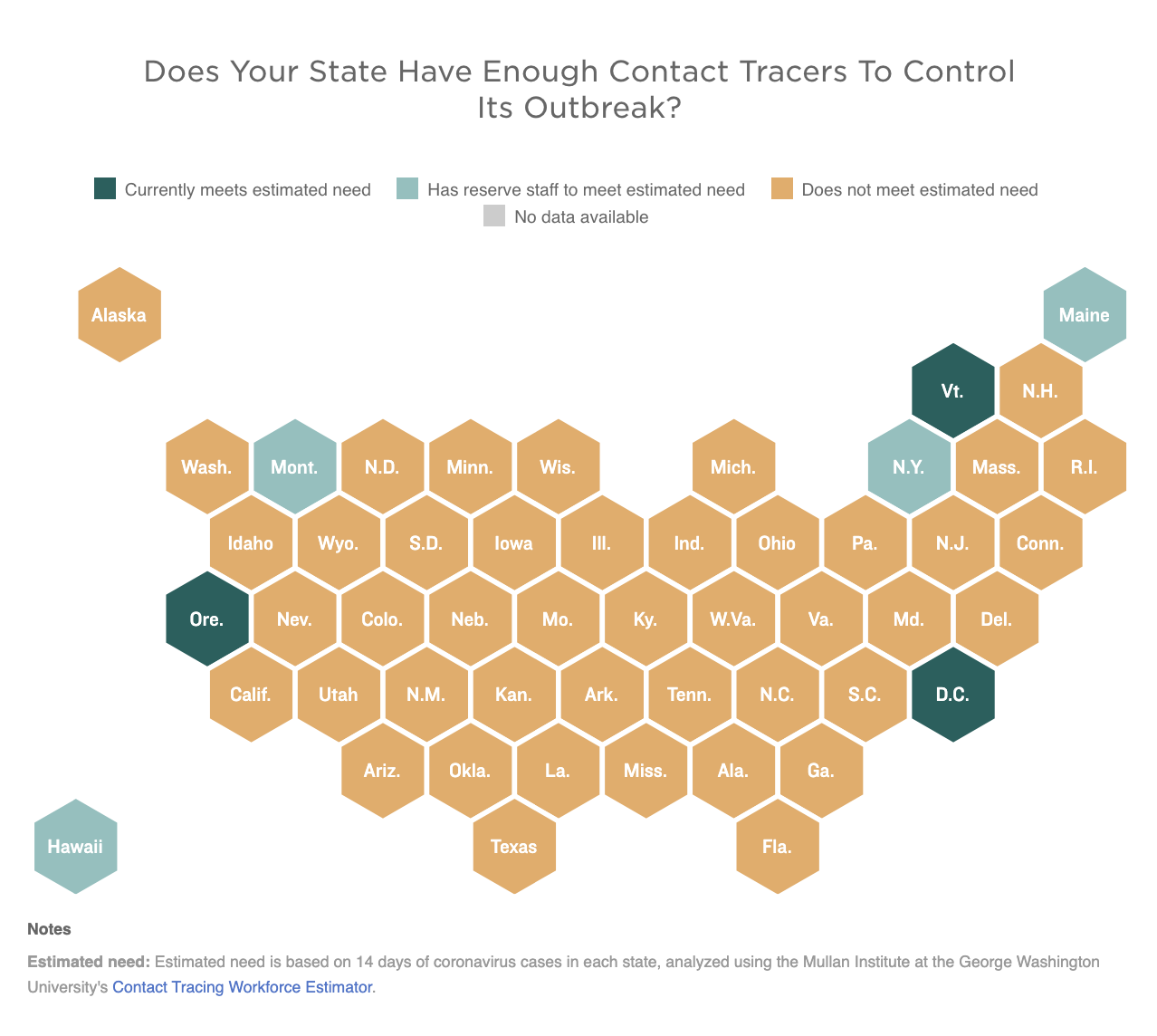 Watson says states need to keep increasing staffing to help curb transmission, but that contact tracing can’t stop the pandemic on its own — especially when cases are surging in many places.

She and her team landed on a new threshold above which contact tracing can’t keep up: 10 coronavirus cases per day per 100,000 people. That threshold is “based both on the data that we’re seeing and on discussions that we’ve had with public health officials at the local and state levels.”

“It’s easy for these systems to become overwhelmed,” Watson explains. When cases rise, they can rise quickly — much faster than a public health team can hire more tracers. The threshold underscores that contact tracing “is not the silver bullet — it is a necessary component of a successful response, but we can’t rely on it once we have out-of-control epidemics in communities,” she says. Instead, communities need to turn to more aggressive interventions, such as closing businesses and mask mandates.

Jane Yackley, an epidemiologist with the Tennessee Department of Health agrees that contact tracing can only be successful when combined with other measures. She highlights the need to “make staying home the easy choice” for people who are infected or exposed.

“Contact tracing continues to be one piece of the puzzle – it will not eradicate COVID-19 and it cannot work if people cannot (or will not) comply,” Yackley wrote in response to the survey. “The perceived ‘failure’ of contact tracing is a failure of expectations. Contact tracing alone cannot control this level of disease.”

Asked if they had needed to change their contact tracing process during a surge, six states said they had, 21 reported they had not, while others said the question was not applicable or the answer was unknown.

“I do think that many programs will be overwhelmed at some point during this pandemic,” Watson says. “So it’s worth considering what that means for contact tracing — whether it means that more federal support is needed, more reserve staff or different approaches to contact tracing when transmission gets really high.”

More than half of states that responded to the survey said they plan to hire still more contact tracers, even seven months into the response. In all, states reported plans to bring on more than 3,500 workers.

“I think it means they can now see the value of it both for actually contributing to disease suppression and for delivering really valuable data, intelligence and knowledge,” Allen says. “They realize they need to catch up.”

One state that said that increased cases were causing delays in contact tracing efforts was Wisconsin. “We are maximizing limited resources in attending to the surge in number — as well as the increased complexity — of cases,” Elizabeth Goodsitt, a communications specialist wrote in response to the survey.

She noted that “the fluctuations in workload makes staff retention challenging,” and funding issues may be hindering local health departments from hiring and training up new staff quickly.

Michigan, which had relied primarily on volunteers to handle contact tracing, has also had to adjust. “This worked really well until colleges and schools led to large increases so we are flexing to more paid staff,” Katie Macomber of the Michigan Department of Health and Human Services wrote in response to the survey.

4. More states are sharing contact tracing data with the public

Contact tracing is also a tool for understanding where transmission is happening in a community. 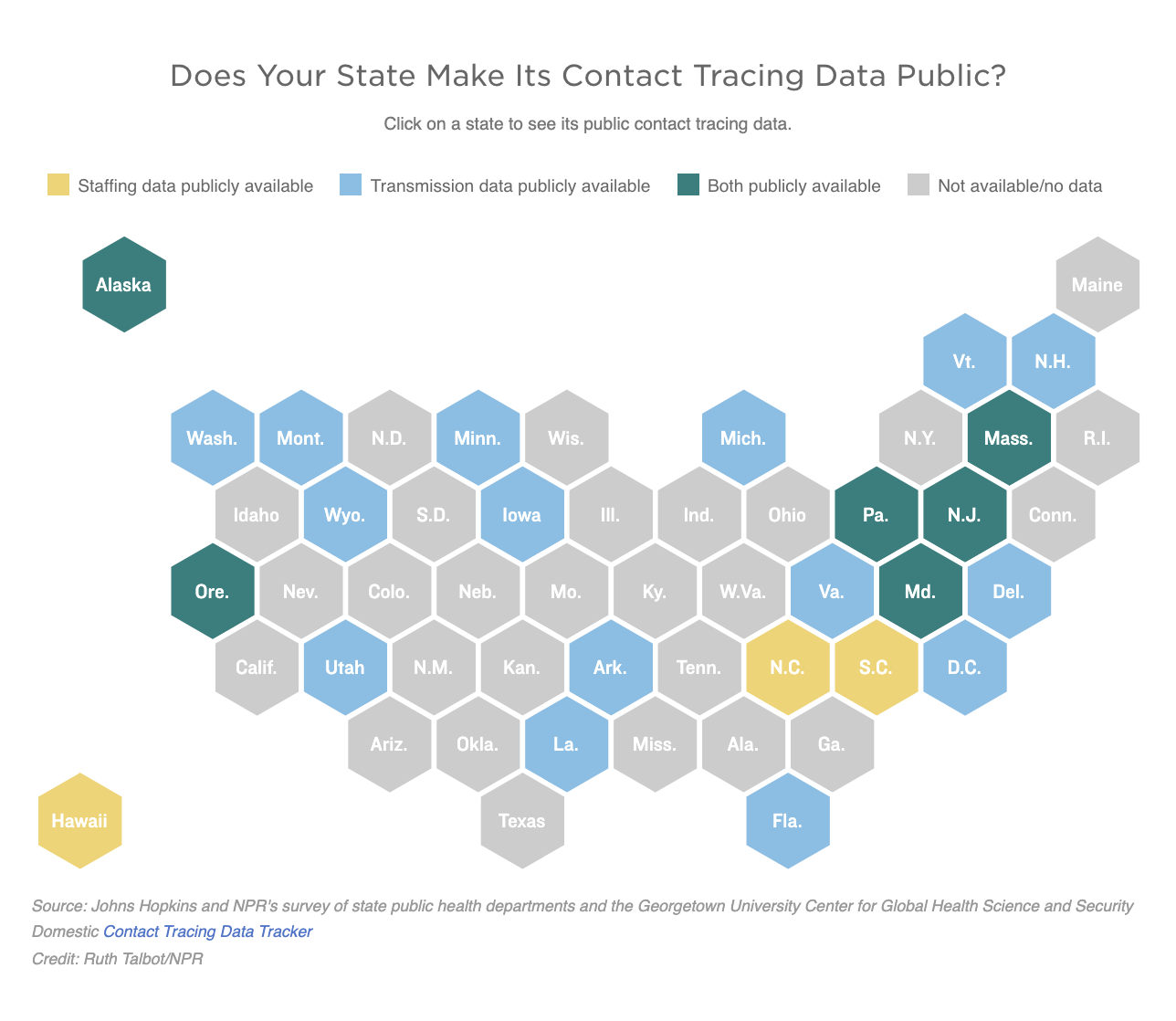 “The thing that’s incredibly valuable about contact tracing at this point is the literal intelligence — the knowledge and understanding — that it gives decision-makers,” Allen says. “If you can work out that you have a whole cluster coming from one specific kind of activity, then that’s what you shut down — you have to shut down everything.”

In this survey, nearly every state reported gathering transmission information and other metrics from contact tracing. Twenty-two states reported sharing that information publicly on a government website — up from 14 states last time.

Watson points out that public information about contact tracing staff numbers is surprisingly less likely to be public than details about transmission.

5. Many states have launched apps but are concerned about public acceptance

The traditional method of contact tracing is people and resource-intensive — trained public health workers call and interview every person who tests positive, and follow up with that person’s close contacts for days to ensure they quarantine.

In all, the new survey found 20 states reported currently using a contact tracing app or related technology, with nine more planning to deploy one in the future. The main concerns states cite about these apps were related to getting the public to use and accept this technology, with privacy concerns close behind.

“I’m curious to see how many people download these apps, how much of a push public health departments put on people adopting them — I think really remains to be seen,” Watson says.

And it may be difficult to measure how much these apps help curb the spread of the virus, Allen says. “Precisely because they’re privacy-protective, it’s actually very hard to figure out what kind of impact they’ve had,” she explains.

Lookng to countries like Switzerland that have been using apps, she says they “definitely catch some cases, but it’s at the margins, it’s not like it’s a transformative thing. It’s definitely not the kind of thing that’s going to make or break our response.”

In other words, there’s no getting around the need for many trained public health workers who can do the time-consuming, labor-intensive work of making a lot of phone calls.

States have tried to meet the need for contact tracers without a lot of help or resources from the federal government. Some have relied on volunteers, others have raised money from private philanthropists.

The need is significant. In April, a group of former federal officials who wrote a letter to Congress calling for increased contact tracing support estimated that $12 billion in federal funding would be needed to pay for new hires. There are some efforts in Congress to better fund and coordinate contact tracing, but the prospects of a coronavirus relief bill have grown dim with the election only weeks away.

Watson says in the face of rising case numbers, members of the public and policymakers might be tempted to “blame contact tracing for failing if transmission starts to run away again and I think it’s not fair to put that on contact tracing, especially when it’s not been resourced appropriately.”

Without this financial support, Allen says the country’s contact tracing workforce will likely “just keep inching up,” even if coronavirus cases spike.

US, Europe facing new round of shutdowns amid coronavirus surge

“We’re dealing with the coronavirus — the virus itself — and also corona fatigue,” one expert said. “People are becoming more and more fed up with the preventive measures."

Coronavirus deaths are rising again in the US, as feared

Health experts had warned that it was only a matter of time before deaths turned upward, given the record-breaking surge in cases engulfing the country.

It had been authorized for use on an emergency basis since spring, and now becomes the first drug to win full Food and Drug Administration approval for treating COVID-19.