WHYY’s Local Music Project spotlights Philadelphia-area musicians by playing their music on radio, TV and podcast. Find out more about the artists and their music here.

R3DLTTR is an electronic pop duo from Philadelphia. Two cousins who spar with beats and synths against words and melodies. Programmed precision with reckless abandonment. Neon lights and never-ending nights. 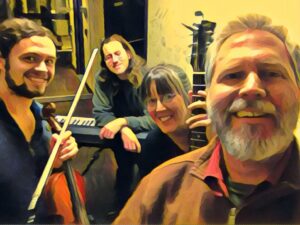 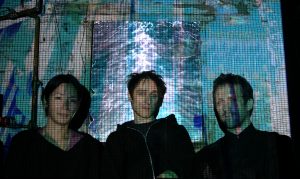 alka was formed by Bryan Michael as an outlet for his electronic compositions, after playing in bands around Philadelphia. He’s released albums both solo and collaborative, with the sound of a restless, mercurial musician unafraid of crashing together diffuse elements – faltering stop-start rhythms, glitches, drifting ambience, near-pop & crisp beats inflected with hints of early electro.

Front person Allegra Eidinger is a native of the Philadelphia suburbs who has found a home amongst other local, queer-fronted DIY bands in West Philly house venues and basements.

Beaver Road features Stan Demski and Mitch Schecter, who started making music together in 1973.  Their music has its roots in folk rock, country rock, and Americana.

Mori Behar is a professional musician residing near Cheltenham Township. He received a degree in Composition from Berklee College of Music and is also an accomplished performer on piano, guitar, electric bass, violin, viola, contra-bass, cello and percussion.

He maintains an active teaching schedule of adults and children, both in private instruction and at the Center School. 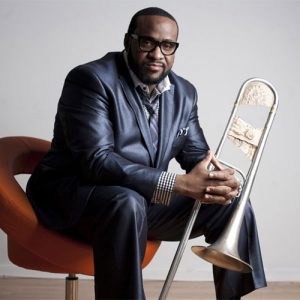 North Philadelphia native Jeff Bradshaw is known as a soul-jazz and hip-hop/funk innovator. Coming up in the Philadelphia Soul Movement, he had performed along some of the music industry’s greats – Michael Jackson, Earth, Wind & Fire, and Patti LaBelle, to name a few, before releasing his own albums Bone Deep and Bone Appetit. His signature smooth sound secured his consistent spot on the festival circuit as solo act and as a guest to artists such as Jill Scott, the Roots, and Mary J. Blige.

Chipocrite uses original Nintendo Game Boys, often accompanied by guitar, bass, drums and/or other lo-fi sequencers, to create his compositions.  Since emerging from the Philadelphia chip scene just a few years ago, he has taken the stage at numerous performance spaces around the country. 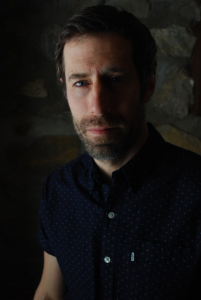 Actor Josh Cooke currently serves as composer and/or music supervisor for a number of podcasts from Unqualified Media and Cloud 10 Media including: Minor Adventures with Topher Grace, Sorry Not Sorry with Alyssa Milano and Endless Honeymoon with Natasha Leggero and Moshe Kasher. For WHYY’s Local Music Project, he’s sent us some of his solo guitar work. 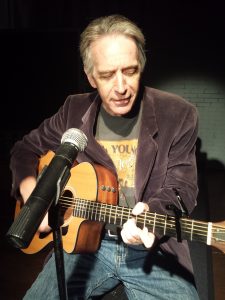 Paul is a prolific songwriter as well as a professional actor and stage manager. His songs emphasize heartfelt and relatable lyrics, while keeping the message simple, and delivering it with soulful intention. Paul’s music heard on WHYY is from his most recent album entitled “The Next Big Nobody”, a collection of songs inspired by life in the theater. 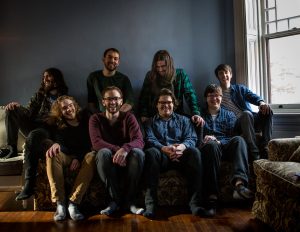 Darla is an 8-piece experimental funk group formed in 2014 in Philadelphia.  The Darla sound is influenced by their origins in the Philly basement rock scene and the funk and jazz of the 1970s.

Greg Davis is a Philadelphia native who began playing guitar at age 8 and teaching guitar at 14.  He has been a member of many Philly-based groups including In The Pocket, Beru Revue, and Crosstown Traffic. 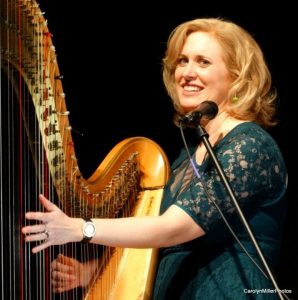 Laura Dishong got her start in music as a vocal music and music education student, but a chance encounter with the harp changed all that.  She’s won the Mid-Atlantic Irish Harp Competition, and has studied harp at the Carde Na Cruite School in Termonfeckin, Ireland. Laura maintains an active performance schedule throughout the region, and continues to teach music in Moorestown, NJ. 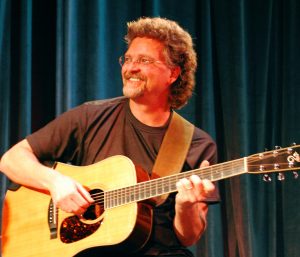 Bucks County-based Tim Farrell is a master of the intricacies and melodic grace of fingerstyle guitar. He performs as a solo artist and also has shared the stage with such notable artists as Les Paul, Jean Luc Ponty, Alex DeGrassi, Jake Shimabukuru, California Guitar Trio, John Sebastian and many more. In addition, Tim is teaching a new generation of musicians to develop a deeper knowledge, enjoyment, and appreciation of music through workshops, seminars, and residencies. 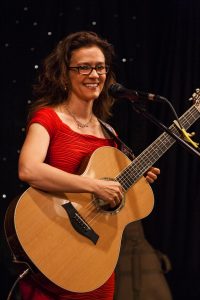 Jessica Graae is a folk singer-songwriter who celebrated the release of her second album “Sea Dream” with a show at World Café Live in Philadelphia.  Nominated for ten WSTW Hometown Hero Homey Awards, Jessica is a 2013 Philadelphia Folk Factory contest winner and a finalist in the 2012 and 2014 Delmarva Folk Hero contests.

Grimace Federation, a post-rock/kraut-rock/pysch-synth band, is the creator of many instrumentals behind Aesop Rock’s flow.  The group was founded on “a need to shift sound, vast musical influences and free-form improv sessions.” (Grimace Federation)

Arthur Herrmann is a singer-songwriter from Cherry Hill, New Jersey.  He currently plays lead guitar and steel guitar for the Morning River Band.

Singer-songwriter Cliff Hillis is celebrating the release of his six-song EP “Many Happy Returns” through San Francisco’s TallBoy Records. The title refers to Hillis revisiting his pop roots.

Hirudidae is a solo synth project based in Philadelphia. It’s ghost music: songs written for ghosts, by ghosts. With roots in Victorian séances and the 1980s underground scene, the project channels restless spirits to create a wailing morass of goth, minimal synth, drone music, and dark wave.

Philadelphia’s Jasper String Quartet is the Professional Quartet in Residence at Temple University’s Center for Gifted Young Musicians.  “The Jaspers… match their sounds perfectly, as if each swelling chord were coming out of a single, impossibly well-tuned organ, instead of four distinct instruments.” (New Haven Advocate) 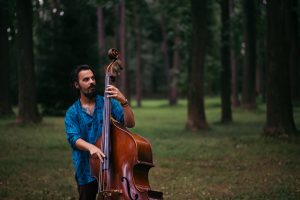 Bassist Nicholas Krolak is a young veteran of the Philadelphia jazz scene. He has spent the last decade working as a side-man, experiencing new styles, and studying with the masters. Now, he’s applying all he’s learned to his own group. Tracing the lineage of bebop into the contemporary, his compositions celebrate the city and honor nature.

Nick Lauria is a musician and composer from South Jersey, who has taught keyboard and composition at The School Of Rock in Cherry Hill.  He is also the founder of the pop fusion band, Sexoffice.

Michael Lawrence is a composer, keyboardist and field recordist in Philadelphia. As a composer, he has been published by the Organist’s Companion (Wayne Leupold Editions), among others. He is an assistant grand court organist on the Wanamaker Organ at Macy’s in Center City. He recently represented Philadelphia for 60 Minute Cities, a project with Bivouac Recording of Shanghai, China featuring field recording albums from cities around the world. 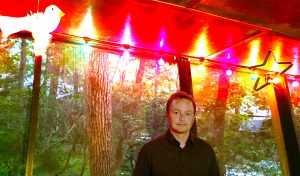 Lazy Salon is New Jersey based multi-instrumentalist Sean Byrne, formerly the drummer with several Philadelphia bands (Mazarin, Lenola, BC Camplight, Matt Pond and others) and primary songwriter for The Twin Atlas during the 2000’s.

Since 2014 Byrne has been crafting psychedelic instrumentals as Lazy Salon, dabbling in genres from melodic electronic/dance, spaced out dub, dreamy pop and elastic rhythms. 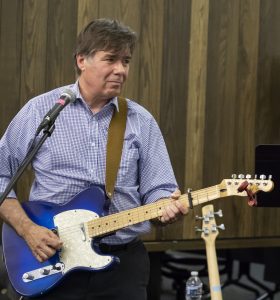 Joseph Lucia is Dean of Libaries at Temple University and an avid guitar player.  His most recent musical venture is creation of a band of librarian musicians known as Marc Fields & Bad Data. 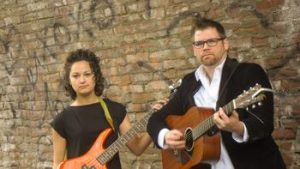 Mike and Shanna are a husband and wife duo with a passion for music and life. They write original music and also play everything from obscure 80’s, oldies, classic rock favorites to covers of today’s artists. You can find them playing music in bars, wineries, house shows, local shows, farmers markets, and everything in between.

Watch Minas on WHYY-TV’s On Tour

Muscle Tough is a future funk fusion trio that formed in 2014.  The band has developed a sound that is a heavily improvised blend of modal jazz, funk, and psychedelia.

Michael O’Reilly has been an Emmy winning producer for the WHYY original production FRIDAY ARTS, and has received multiple Emmy nominations for his original music.  He teaches at Rowan University and at PhillyCAM – the public access channel of Philadelphia.

The Outside Sound Ensemble is a chamber jazz ensemble that performs original pieces as part of the Philadelphia project, Outside Sound.  The project uses visual artwork created by artists with disabilities as inspiration for musicians.

Steve Patruno is the guitarist and vocalist of The New Watchdog Blues Band.

Rob Petitti has been a part of the Philly music scene for 35 years as a solo act, a member of the cover band Waterfall, and as a contributor to Out On The Town entertainment guide.

Piffaro recreates the rustic music of the peasantry and the elegant sounds of the official wind bands of the late Medieval and Renaissance periods. Under the direction of artistic directors Joan Kimball and Bob Wiemken, these pied-pipers of Early Music present concerts in the Philadelphia region, as well as touring the U.S. and other countries. 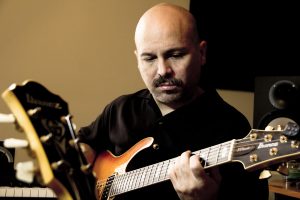 E. Shawn Qaissaunee, a Berklee College of Music alumnus, is in demand as a multi-instrumentalist and composer. He’s known for his talents on guitar, bass, piano and both the rubab and dutar, instruments from his native Afghanistan.

Phil Rizzo is a New Jersey native who has played bass and guitar in various rock bands of the  Philadelphia and South Jersey music scene.

Rosetta recently released their sixth album, Utopioid, which was written as a four piece song cycle.  As their style evolves, “they continue to search for the intersection of heaviness and beauty” in their music.

Al Serrani is a singer-songwriter, multi-instrumentalist, sound engineer, and producer who owns his own sound studio.  He is the founder of the band Armada, for whom he writes original material and plays nearly every instrument.

David Stevens is a contemporary jazz guitarist and producer who got his professional start performing with Philadelphia bands and choirs at the age of 14.

Peter Tang grew up in Shenyang China, where he studied music.  He now leads a traditional Chinese music ensemble which actively performs in the greater Philadelphia area. 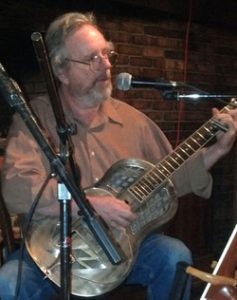 Neil Tapp’s guitar playing draws inspiration from the American fingerpicking tradition, highlighting styles from the 1920s to the present day.

Philly born guitarist and singer-songwriter Larry Tritel has over 30 years of experience playing music. You can catch Larry playing just about every weekend, and hear his theme song for “The Hollis Thomas & Rob Charry Show,” weekends on WIP. 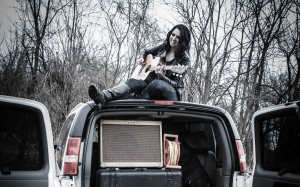 Born and raised in San Diego, Victoria Watts’ music has taken her around the country, eventually leading to Philadelphia where she performed full-time with the band, Element K. She now performs solo and as the front woman and multi-instrumentalist for her own music.

Timothy Welbeck is an emcee, attorney, educator, and musician.  He instructs Hip-Hop and Black Culture at Temple University.

With influences ranging from Sun Ra to Bulgarian brass bands, West Philadelphia Orchestra began as a porch jam in West Philly.  The group has continued expanding their repertoire of Eastern European music and has played all over the country, yet WPO’s heartbeat is always in Philly: they play every Tuesday night at Franky Bradley’s.