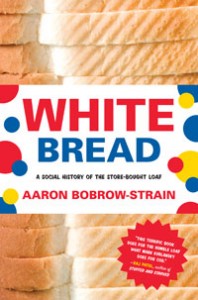 In some circles white bread has been revived as a kitschy, low-brow treat. Other people eat the sliced loaf because it’s cheap and those calories count in a struggling family’s home. AARON BOBROW-STRAIN, who teaches politics at Whitman College in Washington State, will take us through the rise of the iconic American food staple. His new book, “White Bread: A Social History of the Store-Bought Loaf,” describes how the streamlined, factory-made bread came out of early 20th century unregulated food industry, whose social reformers’ concerns were mixed with both food-borne disease and new immigrant xenophobia, as most of the bread back then was made at home or in neighborhood stores. The backlash of the counterculture movement seeded another industrial food movement of artisanal-type bread in the ’80s and ’90s, with cookie-cutter loaves found in chain stores like Au Bon Pain and Breadsmith. MICHAEL DOLICH, baker and owner of West Philadelphia’s Four Worlds Bakery, will join us to explain his sour dough, or levain, style bread. Dolich left a life of litigation to create daily, fresh, naturally leavened loaves.

The near mile-long stretch between Girard Avenue and Spring Garden Street saw thousands enjoy food, shopping, and the occasional drink or two.