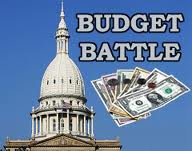 Striking a last-minute deal  last Friday night to avoid a government shutdown, Congress and the White House finally agreed to cut more than $38 billion from the fiscal year 2011 federal budget. The House and the Senate are expected to vote on the budget pact later this week. While Democrats were able to protect some health and education programs – including funding for Pell grants, health research and “Race to the Top” education money – Republicans claim success for reducing spending for the EPA, community health center programs, and the State Department and foreign aid programs. Meanwhile, President Obama is scheduled to address the nation this afternoon about his long-term plans for government spending and the economy, which are likely to differ vastly from Republican proposals. We’ll talk about the deal and the politics driving it all with MAJOR GARRETT from The National Journal and ED O’KEEFE, Washington Post federal government reporter and writer of the blog “Federal Eye.”

Gov. Tom Wolf is pushing a plan to prop up the pandemic economy by taxing natural gas drilling, but that proposal faces an uphill battle in the legislature.