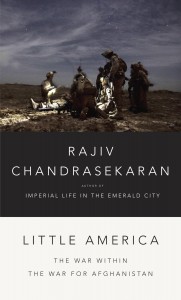 Americans built canals in Afghanistan’s Helmand River Valley, as a hopeful, transformative project during the Cold-War, to bring the country into the 20th century through irrigation, a Western-style school and co-ed club house. Years later this former “Little America,” became inhabited by the Taliban, and in 2009 President Obama ordered the surge of 30,000 troops, and diplomats and aid workers to reclaim this territory from the warlords. Our guest, Washington Post senior correspondent RAJIV CHANDRASEKARAN, trekked through this part of southern Afghanistan with U.S. Marines starting during the surge in 2009, and through 2011, and has written an account of this multi-disciplined, sabotaged effort to restore the region to stability. According to Chandrasekaran’s interviews with many people in or close to the U.S. military, the infighting and incompetence within the American government, military, and aid workers failed to revive this 60-year old infrastructure. His new book, chronicling his time there is, “Little America: The War within the War for Afghanistan.”