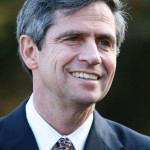 Democratic Congressman and retired Navy Admiral JOE SESTAK stunned the political establishment by ousting incumbent Senator Arlen Specter in the Democratic primary in May, and is now the Democratic nominee for Pennsylvania’s open seat in the U.S. Senate. He joins Marty in the studio to talk about his life, campaign, positions and plans if he defeats his Republican opponent, former Congressman and Club for Growth chairman Pat Toomey.