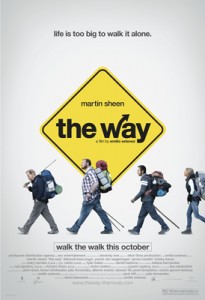 EMILIO ESTEVEZ has written and directed a new film about walking the medieval Christian pilgrimage route, El Camino de Santiago, or The Way of St. James. “The Way” stars MARTIN SHEEN, about a widowed father who treks the historic path through France and Spain, picking up where his world-traveler son (Estevez), was killed in a storm at the beginning of the son’s pilgrimage. As he walks the 500 mile path he originally feels he’s doing for his son, the father meets fellow travelers in search of their own personal reconciliations and dreams. “The Way” is partly based on the Jack Hitt book, “Off the Road: A Modern-Day Walk Down the Pilgrim’s Route into Spain.” Estevez was part of the 80s ‘Brat Pack’ list of young celebrities and has starred in many films including “Repo Man” and “The Breakfast Club.” Martin Sheen played President Josiah Bartlet in the NBC drama, “The West Wing,” from 1999-2006. Sheen has starred in many films including “Apocalypse Now,” “Badlands,”  and “The American President.” Sheen and Estevez are stopping by the Radio Times studio as part of their multi-city American pilgrimage bus tour promoting “The Way.”

Radio Times in Review: on relationships