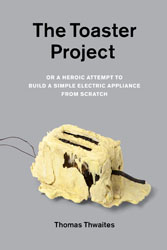 THOMAS THWAITES was a graduate art student in London when he hatched upon a slightly crazy idea: He decided he wanted to see if it was possible to build, from scratch, an everyday household object. He settled on the apparently humble toaster, but looks can be deceiving. Thwaites’ new book, “The Toaster Project: Or a Heroic Attempt to Build a Simple Electric Appliance from Scratch,” details his nine-month ordeal building a simple kitchen appliance from “scratch,” including pulling the raw materials out of the ground. Then, we’ll discuss the culture of people like Thwaites who make things by hand, modern-day inventors – makers. We’ll talk to MARK FRAUENFELDER, editor-in-chief of Make magazine, and author of “Made by Hand: My Adventures in the World of Do-It-Yourself.” We’ll also talk to EVAN MALONE, founder of Philadelphia’s NextFab Studio, a West Philly high-tech workshop for artists, designers, inventors and “makers” that bills itself as a “gym for innovators.”

Worrying about your child’s COVID-era screen time? Here’s what you need to know

For now, while virtual activities are inescapable, experts say there’s no need for concerned parents to panic as long as they keep a few things in mind.

The Knight Foundation has launched a $50,000 art and technology fellowship. Its first class includes a Philly duo making science fiction a reality.

Reading Public Museum brings its mummy back to life, as a hologram

The Reading Public Museum knows what the Ancient Egyptian woman named Nefrina looked like in 300 B.C., so it recreated her as a hologram.