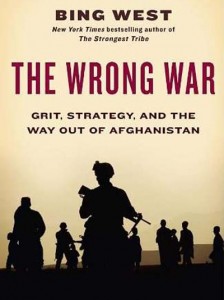 President Obama’s date for the beginning of the drawdown of U.S. troops in Afghanistan is less than two months away. But the Taliban’s annual “Spring Offensive” got off to a spectacular start in Kandahar last weekend, when a surprisingly large group of Taliban fighters infiltrated Afghanistan’s second-largest city and engaged in an hours-long firefight with Afghan and coalition troops. The slaying of al Qaeda leader Osama bin Laden in Pakistan 10 days ago has altered several key dynamics in the region, encouraging some U.S. politicians to call for pulling out of Afghanistan as others call for cutting aid to the U.S.’s most important, and least trusted, ally, Pakistan. And the counterinsurgency strategy that President Bush adopted in Iraq and President Obama adopted in Afghanistan is still hotly contested, especially as pressure mounts for cuts to the military budget. The title of the latest book by BING WEST, acclaimed military historian, assistant defense secretary under President Reagan and Marine infantry officer in Vietnam, reveals some of West’s closely watched and hard-earned perspective about the U.S. war in Afghanistan: It’s called The Wrong War: Grit, Strategy and the Way Out of Afghanistan. But we’ll dive deeper into West’s point of view and book, which benefit from unrivaled access to decisionmakers and in-country troops alike.