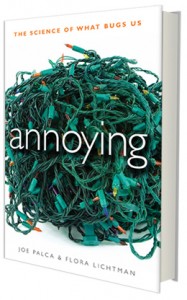 A blackboard is more a memory than a tool used in schools now, but the sound of fingernails across that blank slate still captures a universal cringe. Overhearing others’ cell phone conversations may have taken that dubious distinction of group annoyance. NPR Science Correspondent JOE PALCA says his biggest annoyance is when he gets annoyed with himself for being annoyed. He and co-writer Flora Lichtman have studied the science behind odiferous animal oils, body annoyances, epic traffic jams, and frequency thresholds. Palca and Lichtman’s book, “Annoying: The Science of What Bugs Us,” probably won’t help you defend your nose from a skunk, but might will help you cope next time that guy is talking next to you in a movie theater.