Senate Bill 510 recognizes the plants as carbon free energy and adds nuclear power to the state’s Alternative Energy Portfolio Standard — a 2004 law requiring electric utilities to buy power from a list of clean and alternative energy sources, like wind and solar.

Exelon plans to close its Three Mile Island Unit 1 reactor near Harrisburg in September, and FirstEnergy intends to retire its Beaver Valley plant outside Pittsburgh in 2021. The early closures are part of a broader trend across the U.S. as the nuclear power industry has struggled amid slowing demand for electricity and competition from cheaper natural gas and renewables. Without new policies, natural gas generation is largely expected to take the place of retiring nuclear plants, which would mean higher carbon emissions from the power sector.

“Basing long-term energy policy decisions exclusively on what’s cheap today is shortsighted and quite frankly, foolish,” Aument said. “Consumers have a right to expect that when they turn the lights on, the lights come on. And they have a right to expect that we’re going to produce energy in a way that’s going to protect our environment and ensure our children have clean air.”

Aument said the state Public Utility Commission puts the cost of his bill between $458.9 million to $551 million annually — amounting to about $1.53 extra per month for a typical residential electric customer. He argues doing nothing would be costlier. Relying on an analysis from the Brattle Group, he said that failing to preserve Pennsylvania’s nuclear energy industry would cost an estimated $4.6 billion annually. However, that assumes all five of the state’s plants would close. Only two are scheduled for early closure.

“Our thousands of coalition members across Pennsylvania are eager to move this process forward and get this done,” he said in a statement. “It is essential that we protect our state’s valued nuclear fleet. Nuclear power is our state’s largest source of clean energy. It helps keep our energy costs low, all while keeping 16,000 jobs right here in Pennsylvania.”

Efforts to prop up the state’s nuclear plants have been controversial. A similar bill introduced last month in the House faces opposition from electric utilities, the natural gas industry, manufacturers, environmental organizations, and consumer groups. House Bill 11 also has a similar price tag.

Citizens Against Nuclear Bailouts, a natural gas industry-funded group, slammed the Senate bill as an example of “corporate greed” that would harm electric customers.

“Why would any lawmaker in either branch of the state legislature think it is a good idea to steal from ratepayers to pay for a problem that doesn’t exist? We know the state’s nuclear power generators are profitable,” the group said in news release.

Environmental groups, like the Natural Resources Defense Council, want to see more in the bills to shift the state toward a cleaner energy economy.

“This legislation is just as deeply flawed and troubling as the House bill introduced last month,” said Mark Szybist, Senior Attorney for Climate and Clean Energy at NRDC. “It props up nuclear plants regardless of profitability – and despite creating some headroom for renewables, that space is as likely to be filled by nuclear plants in Ohio. This bill is nothing more than a Band-Aid fix for nuclear power at a time when Pennsylvanians desperately need and deserve a long-term plan for clean energy.”

Pennsylvania’s Alternative Energy Portfolio Standard (AEPS) contains two tiers. By 2021, electric utilities must buy eight percent of their overall power from so-called “tier 1” renewable energy sources — a list including wind farms, low-impact hydroelectric plants, and methane converted from landfills. A second tier of energy sources – including converted coal waste and larger hydroelectric projects – are to make up 10 percent of energy purchases by the end of the timeline. Solar power is in its own category and tops out at half a percent.

Like the House’s bill, the Senate proposal adds nuclear power to the AEPS — requiring utilities to buy power from a newly-created “tier 3” list of sources: nuclear, solar, wind, low-impact hydropower and geothermal.

Although its overall design is similar to the House bill, here are some differences in the new Senate proposal:

“This is to meet the needs of nuclear power plants,” said John Quigley, director of Harrisburg University’s Center for Environment, Energy and Economy. “It’s important to preserve all of Pennsylvania’s zero-carbon energy, at least in the short term, until renewable energy scales up, which will take time. We should be increasing the tier 1 renewable energy requirements. We need a much bigger solar share — we should be looking at 15 percent.”

Christina Simeone, a doctoral student at the National Renewable Energy Laboratory, has studied the nuclear issue at the University of Pennsylvania’s Kleinman Center for Energy Policy. She called it “unfortunate” the House and Senate bills are so similar, and thinks the true fix is a market-wide price on carbon — which means power plants would have to pay for the pollution they emit.

“I do support keeping any nuclear plant from closing,” she said. “I just think the policy choice is very important. A carbon price is consistent with competitive market fundamentals and it promotes innovation.”

Aument co-chaired the caucus, and said his bill drops the refence to a carbon price partly because it was politically unpalatable to some legislators. He said it’s still “worthy of consideration” and best looked at from a regional or federal perspective.

“I know there are a number of members of Congress, including Republican members, who have talked about federal legislation and that any revenue received from a [carbon] tax would go back, in the form of a rebate, to ratepayers. That would be the type of market-based solution that I can be very supportive of,” Aument said.

PJM Interconnection, the grid operator serving Pennsylvania, respects states’ rights to control their own energy policies, according to spokesman Jeff Shields. He said even if planned nuclear retirements happen, the grid will remain reliable.

“If reducing carbon in the states is a goal, that can be achieved through market mechanisms,” Shields said in an email. “In fact, our stakeholders have already initiated a discussion on the topic of carbon pricing.” 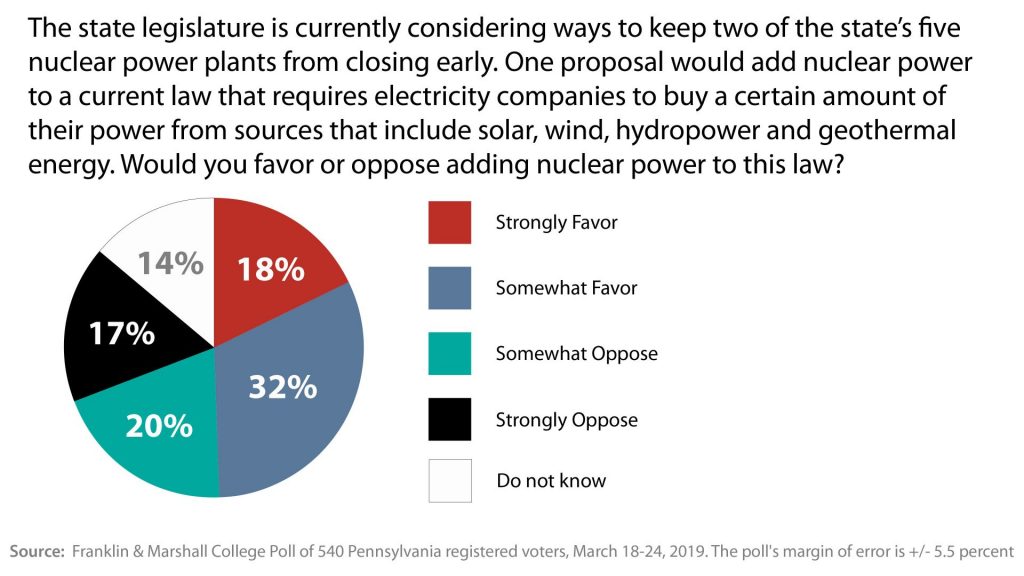 Senate Majority Leader Jake Corman (R- Centre) thinks the nuclear industry is important and wants to see the issue move forward, but does not have a timeline for consideration of the bill, according to his spokeswoman Jenn Kocher.

Gov. Tom Wolf believes the state needs to have a robust conversation about its energy policy, according to his spokesman J.J. Abbott.

“Any solution to ensure the sustainability of nuclear facilities should have a fair cost-benefit ratio for consumers and be done with transparency from operators seeking assistance,” Abbott wrote in an email.

A poll conducted last month by Franklin & Marshall in partnership with PA Post found Pennsylvania voters generally support nuclear energy, but on the question of whether the state should prop up struggling plants, that support is mixed.

The Wolf Administration says a new plan can help the commonwealth reach its greenhouse gas reduction goals by 2050 and help avoid the worst effects of climate change.

At DEP's request, Sunoco has halted work on a section of line.

The sites may be at risk for leaching a class of toxic chemicals known as PFAS into drinking water supplies.