Most of the students in the North Philadelphia-based Shutterbugs photography program join because they’re curious about how they can take more “aesthetic” photos for Instagram.

But rather than focus on selfies, the students learn how to use the medium as a tool to tell stories about themselves and their neighborhoods. This year, the young photographers gathered to celebrate being published for the second year in a row in Motivos Magazine — a national bilingual magazine by and for young people.

“It’s all about helping them discover their own voice,” said photographer Tony Rocco, the founder and executive director of Photography without Borders, the organization behind the photography program.

Rocco started the program almost ten years ago after he used the camera for self-discovery himself. The Italian and Colombian 52-year-old traveled to Colombia to connect with his heritage. Through photography, he explored that cultural part of his identity. It was a life-changing experience that ultimately led him to create his organization and begin teaching photography.

“That was sort of the inspiration for me with my kids because they’re on their own journey too,” said Rocco. “They’re trying to figure themselves out, each and every one of them.”

‘An element of magic’

For 19-year-old John Arroyo, photography has been a healing medium.

His parents signed him up for a photography class at Taller Puertoriqueño for high school students during the pandemic. He began to take photos and express his “artsy moods.” Through his photography, Arroyo worked through some anxiety he had.

The snapshots got him more comfortable — and confident.

“I used to be shy, used to not really talk a lot,” said Arroyo. “But over the quarantine, I learned with my art that I can show myself more.” 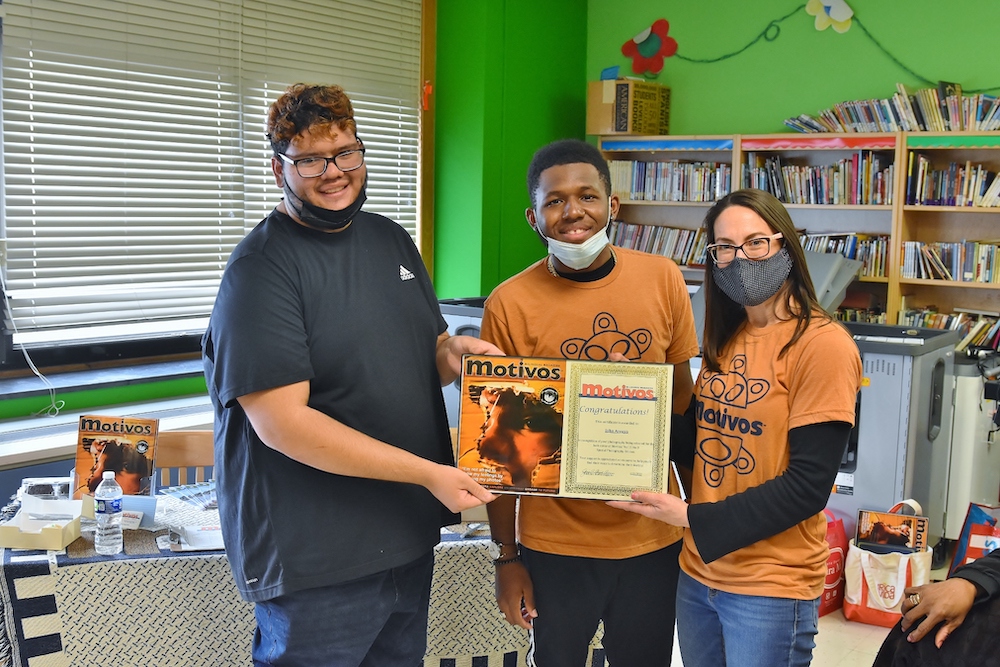 John Arroyo, 19, celebrates his photo being the cover of Motivos Magazine at John B. Stetson Charter School. (Photo Courtesy of Jesús Rincón)Arroyo’s photograph is the cover image on the issue of Motivos Magazine that published the students’ work. The photo represents a breakthrough to the high school student.

“It’s kind of like me breaking through that wall that I put up,” he said.

“The students get very brave and we get to see them conquer some of their fears and insecurities”, said Shoshanna Wiesner, a photography teacher and the program director at Photography Without Borders.

“They surprise us and they surprise themselves with the ways they’re able to tell a story that they may or may not have known that they had to tell until they pulled out their camera,” said the teacher.

The camera “has an element of magic” that students experience, she added.

Lena Champlin, Jeremy Wortzel, and the Group for the Advancement of Psychiatry wrote a children’s book about climate change and anxiety.

After being involved in the program for two years, Arroyo isn’t only a photography student, he also assists during classes and teaches the younger students. The budding photographer graduates from the Pathway School next year and plans to pursue a career in photography and film.

The program “is one of the best things that happened to me,” said Arroyo. The program helped him to “not be afraid of how I dress or how I talk, or how I put myself out [there].”

He’s not the only one who has found appreciation for the artform.

Annalise Agosto, an 8th grader at Stetson Charter, has been in the Shutterbugs program since she was in the 5th grade. As soon as she heard about it, the photography enthusiast knew she wanted to be a part of it.

“When I was younger, I would take pictures of my family,” said Agosto. The program has taught her how to branch out and capture the world around her.

“Now I’m taking pictures of animals or flowers and like nature in the sky and trees and stuff that look cool,” said the 13-year-old. Her photo of a blazing red North Philly sunset is featured in the recent issue of Motivos Magazine.

Agosto graduates from Stetson this year and is headed to Walter B. Saul High School in the fall. There isn’t a photography program there, but Agosto’s mom, Dalia Burgos, plans to enroll her in one so she can continue to pursue the hobby.

“I’m super proud of her because I feel like it’s an outlet,” said Burgos. The program helps her daughter focus on the good in their Kensington neighborhood, where there’s a strong presence of drug use and unhoused residents, she added.

“It’s a distraction from all the bad things that we see,” said Burgos.

For many of the students that Rocco teaches, photography becomes a way to process their lived experiences — whether it’s life in lockdown or their everyday realities.

“It’s part of their therapy, to photograph the neighborhood and come to terms with what they have to deal with every day,” said Rocco. “They use their cameras to try to figure all this out.”

At the city’s newest coffee shop in West Philly, there aren’t any pumpkin spice lattes or many adults, because at Stomping Grounds, young people are in charge.

A place to ‘feel recharged’

The Shutterbugs program doesn’t use a typical teacher-student model. Oftentimes, the young people in the room assist the adults and help them shape the activities for the day based on what the students are feeling.

Wiesner, a teacher at Stetson’s program, says it’s an after-school program, it should be fun.

“This really can be a place of respite for them. We want them to feel recharged,” she said. That kind of approach is one of the things that 13-year-old Agosto really enjoys about the experience.

“It’s just nice meeting a bunch of people and being able to go places and take nice pictures and hang out with your friends and learn new things,” she said.

The journey is different for every student who participates in the photography program. Some realize that they want to pursue photography after they graduate, like Arroyo. Others simply want a fun hobby, like Agosto.

But all of them walk away with a new understanding about who they are, what they can do and the confidence to make it happen.

“They go on to be these powerful people in their family and their community,” said Wiesner. “Yes, it starts in photography, but it can really go on and be a part of their life, no matter what they do once they leave school.”

Conscious Connections brings local couples together to talk about their love, communication, and much more. The show is hosted by Nicole Blackson.

‘Letting it shine’: An Abington library is creating space for kids to talk about gender