At least, that’s what you told us when you voted on which story idea should launch Curious Philly, our new question-and-response forum that allows you to submit questions about your community and have our journalists seek the answers.

This is what you asked us to look into first:

“Despite seeing improvement in the national economy, what we hear about the average income for Philadelphians is that it’s still down. Why is that?”

Great question. It couldn’t be more timely, and it gets to the core of people’s anxieties and pressures these days.

“I’m drowning, and it seems the rest of the economy is doing so well,” says Stephanie Chapman, 29, a divorced mental-health worker and mother of two living in North Philadelphia. She’s in her third year of college and makes $24,000 a year. “The cost of living is crazy.”

Crazy is a word we heard a lot from people. Also stagnant, as in, “My sales have been stagnant for some time.” That’s Mike Scotese, 52, owner of the Gray Lodge Pub in Mayfair. Instead of hitting the bar at night, lots of people are staying home drinking craft beers “and getting their social fill from their phone apps,” says Scotese, who adds that he makes between $40,000 and $60,000 annually.

“Meanwhile, the rich get richer, and everyone else is muddling along.”

A look into the numbers

There’s a lot to unpack in your question.

First of all, economists say it’s true that the U.S. economy is strengthening. They point to an annual growth rate of more than 2 percent, unemployment at 4 percent, and the Dow Jones Industrial Average passing 24,000.

A Struggle to Get Ahead …

… That Is Worse in Philadelphia and Its Suburbs

Median household income in the United States is down 2.4 percent since 2000, but Philadelphia’s rate of decline is more than twice as severe, and the metro area’s income drop exceeds the city’s.

It’s also true that, compared with the country as a whole, Philadelphia is not measuring up, although income levels have been rising lately and we’ve seen job growth.

Overall, however, “the economy here has not performed for people as they’d have liked,” said Mark Price, labor economist at Keystone Research Center in Harrisburg.

“Sadly, the city’s poverty rate seems unresponsive to improving national economic conditions,” according to an April report by the Drexel University Center for Labor Markets and Policy.

For one thing, although the unemployment rate has fallen, in the city it still sits at 5 percent, higher than the nation’s rate. And that doesn’t take into account “the discouraged,” a group of jobless people no longer looking for work, says John Dodds, director of the Philadelphia Unemployment Project.

In the Philadelphia-Camden-Wilmington PA-NJ-DE-MD metropolitan area, median household income was $65,996. This includes the city, eight of its Pennsylvania and New Jersey suburban counties, as well as New Castle County, Del., and a sliver of Maryland.

“Philadelphia has a huge poverty problem, and our income numbers compared to the rest of the nation never looked that good,” says Judith Levine, a Temple University sociologist and poverty expert.

A host of woes

The city’s 26 percent poverty rate is the highest of any of the 10 most populous U.S. cities. Why? The loss of 300,000 manufacturing jobs between 1950 and 1980, and still more similar jobs afterward, forcing the creation of generations of unemployed or underemployed people; aspects of racism, which have kept families mired in destitution; and an underperforming school system.

Now, there’s high-paying work to be had in Philadelphia. But, says Drexel economist Neeta Fogg, lots of residents aren’t qualified to do it — hence, that “tale of two cities” tag often hung on Philadelphia.

“The gap between what the labor market requires and the level of people’s skills is pretty big,” she says. 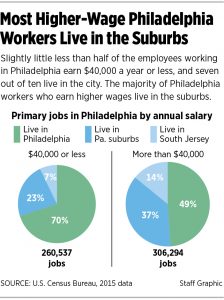 Of people working in Philadelphia in major occupations that require college degrees — professional, technical, managerial, and high-level sales jobs — just 36 percent live in the city, while nearly 51 percent are suburbanites who commute in to sit in those gleaming office towers, Fogg says.

In Philadelphia, 82 percent of residents have completed high school; in America as a whole, the total is 92 percent, according to the National Center for Education Statistics.

And while 26 percent of Philadelphians aged 25 and older have a bachelor’s degree or higher, one-third of Americans do, according to various studies. Of the 10 biggest U.S. cities, only San Antonio (at 25 percent) has a lower percentage of people with college degrees than does Philadelphia, according to an analysis by Philadelphia Works Inc.

Employers who run pharmaceutical, insurance, and finance companies set up shop outside the city to hire from a more educated pool of suburban workers, Adams says.

Over the last 40 years, Philadelphia has seen a 24 percent drop in the number of available jobs. At the same time, its suburbs enjoyed an increase of 110 percent, says Ashley Putnam, a director at the Federal Reserve Bank of Philadelphia.

Now, about Philadelphia jobs: Unemployment here is down, with about 24,000 positions added in the last two years, according to a 2018 report by the Center City District. And, says Mark Zandi, chief economist with Moody’s Analytics in West Chester, wage growth picked up in Philadelphia between 2012 and 2016.  “It’s still low,” he says, “but it’s accelerating.”

While all that’s true, some observers say, remember that the 2016 median household income in Philadelphia was actually $494 below the income level recorded before the recession started in late 2007, as measured in 2016 dollars.

Many of the available jobs don’t pay all that much. “High-income households are doing well in Philadelphia,” Zandi adds. “Low-income folks are going nowhere fast. Inequality is getting worse.”

In Philadelphia, it’s as though someone grabbed a knife and hollowed out the middle of the workforce, Adams says, leaving mostly good or bad jobs.

It’s likely you’ve heard that Philadelphia is famous for its jobs in medicine and higher education — meds and eds. No doubt, that lends the city prestige.

But in truth, meds and eds here is “generally considered a low-wage category of jobs,” says Ryo Tashiro, economic adviser at the Federal Reserve. “Most of the job gains are not for doctors but home health-care aides.”

Overall, the fastest-growing sector of Philadelphia jobs is in hospitality, up 56 percent since 1990, and employing more than a quarter of the city’s workers, according to Dermot Delude-Dix, research analyst with Unite Here Local 274, which represents hotel and restaurant workers.

But no one is getting rich. The median income for food-service work is less than $18,000 annually, Delude-Dix said. Most such workers are black, female, and nonunion folks who work fewer than 40 hours a week, he added.

“Those of us in the $30,000-to-$40,000 bracket, we’re not making it,” says Denise King, case manager at Cathedral Kitchen, a Camden nonprofit. “I’m still paying back student loans for my master’s degree. It’s a struggle every day. I’m 62. Who can think about retiring?”

While middle-income folks are bogged down with stagnant wages, those in upper echelons are realizing ever-widening advantage.

Between 1979 and 2014, middle-class Americans saw salaries rise 28 percent nationally, according to the Congressional Budget Office. Meanwhile, the top two-tenths of America saw a 95 percent increase.

Unions are eroding in influence, as globalization and technology (checkout computers at Target instead of cashiers) are keeping worker wages low, says Carl Van Horn, director of the Heldrich Center for Workforce Development at Rutgers University.

Some experts, such as economist Lawrence Mishel of the Economic Policy Institute, will tell you that it’s no accident wages have been relatively static over the last 40 years: “We’ve seen broad-based suppression of wages,” Mishel said. “Policy changes have kept workers from earning a good living.”

Employers have changed how they think about workers, says Peter Cappelli, professor of management at the Wharton School at the University of Pennsylvania.

It used to be that bosses worried about customers, employees, their community, and shareholders. Now, they care only about shareholders, Cappelli says. So, they eliminate overtime, resist increasing the minimum wage, and make workers part-timers, saving dollars.

“Pay systems had been weighted toward fairness,” Cappelli said. “Then employers stopped doing that to make labor cheaper. That’s why wages have been stagnant since 1980.”

Many of us are thrust into a “precarity,” says working-class studies expert John Russo, a visiting scholar at Georgetown University. As the word sounds, people live a precarious existence, unsure of whether their boats will sail or sink.

“My full-time position of head cashier at a Barnes & Noble was eliminated,” says Sophie Kandler, 51, an unemployed transitioning woman from Phoenixville who is separated and has a 10-year-old daughter. “I was making $13 an hour, and now this, after 14 years there. I cashed out my 401(k).

“I should be saving for the future or my daughter’s college, but I’ve got to eat. There’s so much winning, I can’t stand the winning.

“That is extreme sarcasm, by the way.”

How to get around if SEPTA goes on strike — mutual aid for rides, bikes, and more

One Philly bike shop will offer a 10% discount on all bikes with a SEPTA Key card. Other organizations plan to give free rides if a strike happens.

About 100 people gathered in Germantown to honor Walter Wallace Jr., and call for Philadelphia to invest in alternatives to traditional policing.

‘Mad or nah?’: Philly residents react to news that city is hyper-segregated

P.O.C, a partner in WHYY’s News and Information Community Exchange, hit the streets to talk with residents about the lack of desegregation in Philadelphia.