Patricia (not her real name) came to the United States to escape poverty and gang violence in Guatemala. She wanted to apply for a visa to immigrate “the right way” 19 years ago, but she was worried about being denied and losing the $300 in application fees, which she said could buy a month or two of groceries in Guatemala. So she decided to cross the Mexican border illegally with her five-year-old daughter, her brother-in-law, his wife, and her nephew. (Her husband had already immigrated to the United States five years earlier.)

Guatemala was warm, she remembers, but the Mexican desert was cold. After being caught by the border patrol and sent back to Mexico, the group tried to cross again. Fearing she would be raped on the two-week journey, she bought a shot of birth control medication to stave off a potential pregnancy and carried it with her. During the trip, she injected herself with it. Her daughter, five years old at the time, witnessed the injection and has hated needles ever since.

Now Patricia supports her 23-year-old sister, a single mom, and her 75-year-old mother, who live together in the Central American country. Unsafe conditions have prevented her sister from finding a job. “But what can we do?” said Patricia. “We were born in that place. We never knew in the future it would be a bad place, that there would be bad people there.”

In the United States, she is a waitress in an Italian restaurant, where her boss and the customers are really nice, she says. But since President Trump took office, she has been feeling “50-50.” She doesn’t have any legal documentation or a driver’s license, but has to drive to work. Nowadays she’s worried that a cop could pull her over and not only write her a ticket, but also call ICE. So she limits her driving. And at home, she won’t open the door without looking out the window first.

One of her main problems is money. Her daugher (protected under DACA) and her American-born son are in college, but since neither she nor her husband have social security numbers, her kids have trouble getting federal student loans. So she pays for their college, supports her mother and sister in Guatemala, and helps her husband, a cook in a pizzeria, pay the family’s bills.

But even when there is enough money, life as an unauthorized immigrant is not always easy, she says. Not long after the family came to the U.S., her daughter broke her toe. She was treated at the emergency room, but the receptionist at the specialist’s office refused to make an appointment because Patricia did not have a Social Security number.

“I feel like I was discriminated against,” she said.

Unsure whether asking another doctor would raise red flags about the family’s immigration status, they decided to let the toe heal on its own, little by little.

In her own words: Dealing with inquisitive neighbors

“I say we’re close to getting our papers or something like that. But just one neighbor. The rest of the neighbors, they don’t know. They just think we are OK. Just one of the neighbors, I feel comfortable explaining. But not exactly. I use this little trick, I say, ‘Oh, the lawyer is working on my papers, but it’s very hard. Takes time.’ She always asks me, ‘When will you bring your mama? When will you go to your country?’ Because we’ve lived like 10 years in Pennsauken. We buy a house. Now she’s moved. But in the beginning, I give that story.”

In her own words: When people say immigrants steal jobs from Americans

“I think it’s not true. I work in a pizzeria. They’re open 11 a.m. to 11 p.m. The other workers say, ‘Can you cover for me? I’m tired. I don’t want to work.’ We are working because we need the money. I support my family in Guatemala and my family here, so sometimes I say, ‘OK, I can work for you.’ They feel tired. They want to go home. We say, ‘Yes, we can work for you.’ Because they don’t want to do it.”

In her own words: Living in the U.S.

“I feel like an American. I know my country is nice, but I know it’s very bad now. Maybe I’ll just go to visit, for the views, but not to live.”

Living in the U.S. 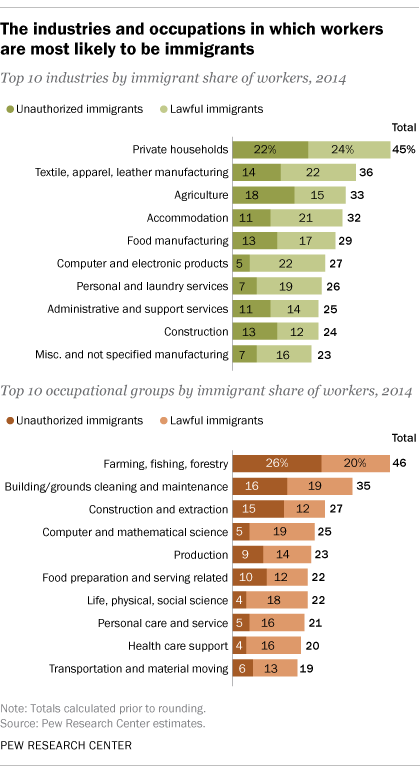 Jeidi: Fearing how to survive if parents are deported

Tanesha: An unauthorized worker abused by her employer