Despite recent efforts to improve the state’s budget practices, New Jersey has once again received a report card littered with bad grades.

New Jersey isn’t at the head of the class nationally in any category in the Volcker Alliance’s latest state-by-state review of several years’ worth of fiscal policies. The nonpartisan alliance promotes sustainable budgeting and best practices for state policymakers.

Worse yet, New Jersey continued to receive near-failing grades in several categories, showing little to no improvement in areas identified as major trouble spots in the past, including public-employee pension funding and budget forecasting.

In fact, the state’s long-standing practice of shorting its annual obligation to the pension system — which Gov. Phil Murphy has continued since taking office in 2018 — helped New Jersey maintain a D-, the worst grade the Volcker Alliance gives out, in the category of “Legacy Costs.”

Released yesterday, the latest edition of the Volcker Alliance’s “Truth and Integrity in State Budgeting” series comes just days before Murphy, a Democrat, plans to unveil before lawmakers in Trenton a proposed spending plan for the state’s next fiscal year, which begins July 1. It remains to be seen whether Murphy, in Tuesday’s budget address, will announce any new efforts to shore up problem areas flagged in the new report.

The Volcker Alliance, founded by the late Paul Volcker, a former Federal Reserve Bank chairman and New Jersey native, began analyzing the states’ budget policies in 2015, releasing an initial report scrutinizing the fiscal practices of New Jersey, California and Virginia. The analysis was then widened to other states, with consultants and faculty and staff at numerous universities providing assistance.

The organization’s new report — which scrutinized state budgeting practices between fiscal years 2017 and 2019 — notes that states as a whole spent a combined $2.1 trillion in 2019, which is equal to about 10% of the nation’s gross domestic product (GDP). The report suggests the organization’s work can “point policymakers, advocates, investors, and citizens toward best practices for crafting fiscally sustainable strategies.”

New Jersey received its best grades from the Volcker Alliance, both B’s, in the categories of “Reserve Funds” and “Transparency.” That comes as the state has been making a push in recent years to set aside more revenue to hedge against any unforeseen spending needs or dips in tax collections. In fact, the state could see some improvement in this category in the next report after making the first deposit in a decade into the budget’s official “rainy day fund” last year.

The only knock on the state’s current budget-transparency practices was the lack of an official disclosure listing the cost of deferring the maintenance of major capital assets. New Jersey got full credit for putting detailed budget and debt information online for public review, and for publishing an annual tax-expenditure report that lists all tax breaks that reduce the state’s annual revenue stream.

On the other hand, New Jersey received D grades in the categories of “Budget Forecasting” and “Budget Maneuvers,” continuing under Murphy a trend that began when former Republican Gov. Chris Christie was in office. For example, the new report cites the state continuing to divert revenue out of its Clean Energy Fund as a trouble spot. It also highlights a tax-amnesty program that lawmakers approved for FY2019 that created a one-time source of revenue for the state budget, thus opening up a hole in the current fiscal-year spending plan. 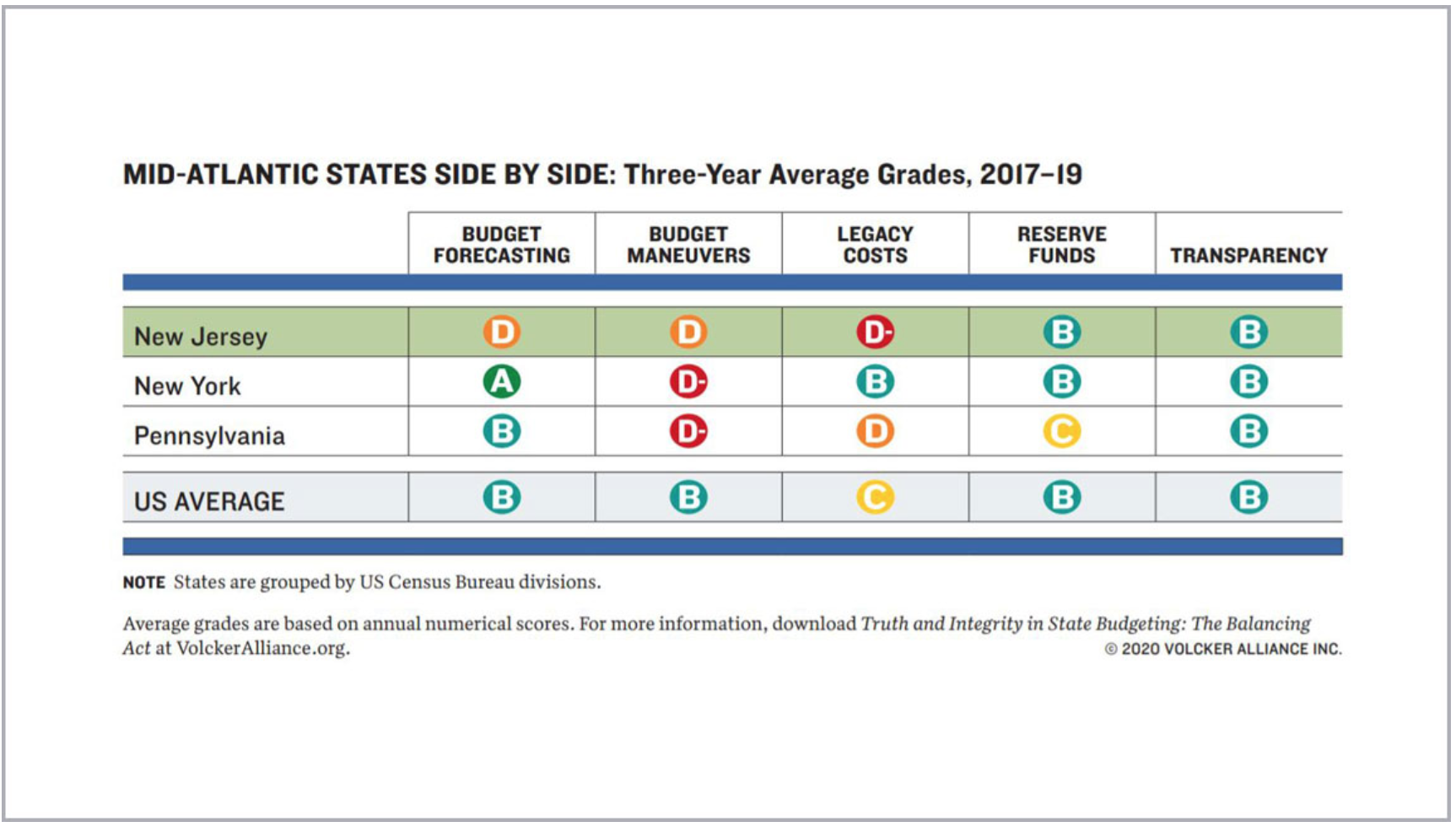 Despite recent attempts to reform the state’s annual revenue-forecasting process — by establishing a consensus-forecasting model, for instance — New Jersey also continues to be among the states to leave such responsibilities up to a single branch of government. The state was also flagged in the report for not conducting long-term revenue and expenditure analyses.

But the worst grade handed out by the Volcker Alliance came in the “Legacy Costs” category, which covers funding for public-employee pensions and retiree health-insurance obligations.

While in office, Christie had started to slowly ramp up the state’s annual pension contribution, and Murphy has stuck with the same plan during his first two years in office. But the current state budget sets aside only 70% of what actuaries would consider to be “full funding” of the state’s annual obligation to the pension system, carrying on the tradition of underfunding.

In top Wall Street credit-rating firms’ latest assessment of the cumulative damage, New Jersey’s pension system is listed as the worst-funded state retirement plan in the country, leaving each resident with the equivalent of $14,515 of debt, according to a Bloomberg analysis cited in the report. Yet the current ramp-up plan doesn’t call for full state funding of the annual pension contribution determined by actuaries until fiscal year 2023.

Still, in explaining why the worst grade that can be given out is a D- instead of an F, the Volcker Alliance said “even the most fiscally challenged states have some budget practices worth emulating.”

Perry has been a figure in the congressional investigation into President Donald Trump’s actions leading up to the Jan. 6, 2021, Capitol insurrection.

Two investigations, three court actions, and six months later — federal COVID-19 relief funds have yet to be spent in Upper Darby after a portion was alleged to be missing.