Ask us about COVID-19: What questions do you have about the current surge?

The rollout of COVID-19 vaccines is moving far more slowly than planned across the Philadelphia region.

Two bottlenecks are causing the slowdown. The first is reflected by the number of vaccines each state has received versus the number it was allocated by Operation Warp Speed, the federal program in charge of funding vaccine manufacturing and distribution.

The second is that each jurisdiction has been able to use less than half of the doses it has actually received.

Pennsylvania has been allocated nearly 523,000 doses of the two vaccines combined, according to the Centers for Disease Control and Prevention, but the state says that, so far, it’s received only 229,325. While governors in many states have blasted the Trump administration for sending fewer vaccines than promised, Gov. Tom Wolf was more understanding Wednesday.

“I’ve been personally disappointed — maybe my expectations were too high that the vaccine would have been rolled out faster, in a much more efficient manner than it has been,” Wolf said at a press conference.

However, it’s not clear Pennsylvania could have handled a faster rollout from the manufacturers.  Even among the 229,325 doses received by hospitals and health systems (127,725 of the  Pfizer/BioNtech vaccine and 101,600 of the Moderna vaccine), fewer than 100,000 shots had been administered as of noon Wednesday, according to the state Health Department.

Wolf blamed the bumpy start on the hospitals, pharmacies, and long-term care facilities responsible for receiving the vaccines from the federal government and doling them out.

“Their logistics systems are the ones really being tested at this point. The state is not directly involved in the logistics yet,” the governor said, adding that the systems responsible for distribution at this stage were outside the state’s control. 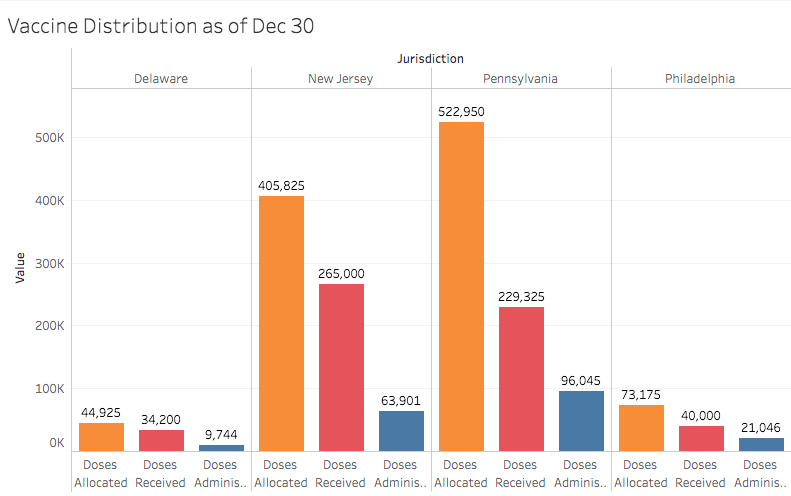 The pattern is consistent across the region.

Philadelphia, which receives its own allotment of vaccines from the federal government, has been allocated 73,175 doses. As of Tuesday, about 40,000 vaccines had been received and about half that -— just over 21,000 vaccines — had been administered.

Delaware had received 34,200 doses as of Wednesday, fewer than 10,000 of which have been administered.

New Jersey has been allocated 405,825 doses of both vaccines combined. According to Health Commissioner Judith Persichilli, 265,000 of those have been delivered, and 63,901 people have been vaccinated.

It’s unclear what exactly is causing the delays on either level.

Pennsylvania Health Secretary Rachel Levine said her department thinks of the allocated number as more an amount of vaccine the state should be prepared to receive than as the number of doses that will actually show up in the FedEx (for Pfizer) and UPS (for Moderna) trucks.

“I think the expectations set by Secretary Azar that 20 million doses would be given essentially by tomorrow were always unrealistic in terms of just the challenges of this unprecedented program,” Levine said, referring to Alex Azar, who heads the federal Department of Health and Human Services.

Persichilli explained that on the hospital level, it’s mostly a logistics issue. Because of the ultra-cold temperature requirements for the Pfizer vaccine, it’s been necessary to know exactly how many people are being inoculated at any given time, rather than just holding a clinic one day where people walk up and roll up their sleeves. That scheduling takes more time.

“You don’t want to puncture a vial and take out four doses and have one dose left over, because if you do you have to use it within six hours, and if you don’t, it’s wasted,” Persichilli said.

She also said inconsistent shipments from the manufacturers have meant that appointments are being scheduled conservatively, so that more people aren’t promised vaccines than there are actual doses for.

“The cadence of it has not been steady,” Persichilli said. “We expect that to improve.”

Levine noted that the holidays and bad weather may have caused some delays. Persichilli said inoculation numbers were especially low on Christmas Eve, for example, because people hadn’t wanted to risk feeling ill for the holiday as a potential side effect.

On Wednesday, Levine signed a new order requiring that 10% of doses received by hospitals must be set aside for health care personnel not associated with a hospital, such as EMTs and physicians in private practice, who will be able to sign up for immunizations at a central location.

She estimated that there are 1 million health care workers across Pennsylvania eligible for vaccination in Phase 1A alone.

Should I get my kids the COVID-19 vaccine booster?

The Pfizer booster is available now to children ages 12 to 15, and immunocompromised kids 5 to 11 can get a third vaccine dose.