It’s Labor Day Weekend in Philadelphia, and that means block parties, barbecue, and Made in America on the Parkway.

Here are a few big takeaways as well as the full list of street closures  and general information, if you should need it.

It’s Labor Day Weekend in Philadelphia, and that means block parties, barbecue, and Made in America on the Parkway.

Back for it’s fifth year with over 60 musical acts planning to jam on five different stages between City Hall and the Art Museum, the the two-day Live Nation/Roc Nation/Jay-Z/Budweiser music festival kicks off Saturday, Sept. 2, and Sunday, Sept. 3, at 1:00 p.m. and runs through about midnight.

An added perk for the altruistic — proceeds from the festival will benefit the American Civil Liberties Union of Pennsylvania, as well as the United Way of Greater Philadelphia and Southern New Jersey.

Be warned Philadelphia: As many streets will be closed, obviously traversing Center City via automobile or public transportation will be tricky. Those details, as well as some other things of note, released by the Mayor Kenney’s communications office, are below.

Here are a few big takeaways.

1. Made in America is rain or shine. 2. Tickets are available. But once you’re in, you’re in. Re-entry is not permitted. 3. No weapons, no drones, no coolers, no outside food.4. Blankets and bottles of water (sealed or empty) are ok.

For tickets, lineup and general information about the Budweiser Made in America Festival, visit madeinamericafest.com.

Here’s the full list of street closures and general information, if you should need it.

Road Closures To accommodate the venue construction and two-day festival, gradual road closures along the Benjamin Franklin Parkway and in sections of the Fairmount neighborhood will begin on Sunday, Aug. 27, with the number and magnitude of street closings and parking restrictions increasing each day.

A map of temporary closures and areas affected by the 2017 Budweiser Made in America Festival is available on the City’s website here. 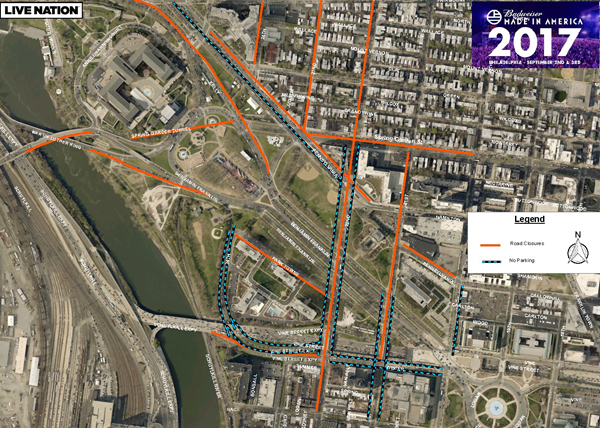 The above phases of closures are laid out below.

Delays can be expected during the event construction set-up and during festival days. Motorists are advised to avoid the area by using alternate routes, and allow for extra driving time in the areas near these festivities before and during Labor Day weekend.  Please refrain from double-parking, which creates congestion, limits traffic flow and is illegal.

All roadways will re-open prior to morning rush hour on Tuesday, September 5. Some low-impact parking and travel lane restrictions will remain in place. Here’s what else to expect.

Thursday, August 31Two lanes of Eakins Oval in front of the Philadelphia Art Museum, and Spring Garden Street between Pennsylvania Avenue and Benjamin Franklin Parkway will be closed; and parking is prohibited on Pennsylvania Avenue from 22nd Street to 23rd Street (south side) as well as Park Towne Place from 22nd Street to 24th Street (north side).

The following streets will be closed starting at 10 a.m. Sept. 5:

The full extent of road closures around the festival site will begin at 10:00AM on Saturday, September 2nd and remain through the duration of the event. A complete list of road closures and no parking restrictions is outlined below:

Regional Rail: Late-night train service will be available on SEPTA’s Regional Rail Lines on Saturday and Sunday nights departing from Jefferson, Suburban and 30th Street Stations. Special schedules will be posted in stations and are also available online at: www.septa.org/events.  If the concert runs late on Saturday or Sunday, these trains will be held for approximately 20 minutes after the concert ends. Parking is free at all SEPTA-owned Regional Rail lots on weekends. Parking lot location information is available online at:  www.septa.org/parking.

Bus: Due to Festival-related street closures, SEPTA Routes 7, 32, 33, 38, 43 and 48 will be detoured from its normal routes through the Benjamin Franklin Parkway area beginning at 10:00am on Friday, September 2nd through 5:00 am on Monday, September 5th. Specific route changes are available on the System Status Page at septa.org.

The Budweiser Made in America venue features multiple entrances/exits for ticket-holders during the two-day festival.  Entrances are located at 21st Street and Benjamin Franklin Parkway.  Re-entry to the venue will not be permitted on either day. The perimeter of the festival will be firmly secured and protected for maximum public safety.

Access to the venue is limited strictly to ticket-holders, who will be subject to searches before being permitted inside the venue to ensure the enjoyment and safety of everyone at the festival.  Ticket holders should be prepared for additional searches inside the venue at the discretion of festival security staff. Spectators are strongly discouraged from carrying bags, backpacks, or satchels of any kind.  All bags are subject to search.  The public can do their part by using common sense.  If you are attending the festival activities, plan ahead regarding driving, public transit, parking, supervision of children and wearing comfortable attire.

There is an ADA/Accessible Entrance at the Main Gates on Benjamin Franklin Parkway at North 20th Street. Festival attendees requiring accessible accommodations for guest screening and arriving via vehicle can be dropped off at 24th and Park Towne Place.

Leave no bags or items unattended.  In an emergency or to report a suspicious person, activity or item (a backpack, a package, a container), notify a police officer immediately or call 9-1-1.  Do not try to open, move, cover or touch a suspicious item.

Items allowed inside the venue include:

Factory-sealed plastic water bottles 1 per person up to 1 liter
Empty plastic water containers 1 per person up to 64 ounces for re-use at water refill stations (drinking water will be available for purchase and there will be water stations for re-filling bottles)
Empty hydration packs of any kind (backpacks, waist bands or other hydration items and inserts)
One small non-framed backpack or bag subject to search and re-search (all searched bags will be tagged following search)
Blankets and towels
Umbrellas (small hand-held only)
Non-professional cameras, flip-cams, camera phones
Sunscreen, sunglasses, government issued I.D., cash/debit cards/credit cards are encouraged

Items NOT allowed inside the venue include but are not limited to:

Weapons and contraband of any kind (regardless of permitting, e.g. Right-to-Carry permits will not be honored and weapons will be confiscated)
Masks of any kind
Drones
Fireworks or explosives
Illegal or illicit substances of any kind
Food and non-water beverages including alcohol taken in from the outside
Pets (except trained service animals)
Flyers, handbills, posters, stickers (no solicitation allowed)
Chairs
Glass containers
Skateboards, motorized vehicles or scooters
Coolers
Professional recording devices or cameras (no detachable lenses or tripods meant for   commercial use)
Fluorescent plastic lights (glow sticks)
Laser pointers or any items that would obstruct others’ view of the stages (kites, flag poles, large signs, etc.)

Made in America is a “No Drone Zone”. Drone use is prohibited, and the use of drones over groups of people or over stadiums is a violation of FAA Special Rule for Model Aircraft. See something, say something if you see a drone operating in the vicinity of Made in America.

The Budweiser Made In America festival is an all-ages event. However, to enter the festival beer garden areas, you must be 21+ and have valid photo ID. Underage drinkers will be detained.

Smoking is not permitted on any Parks & Recreation property including, but limited to, buildings, playgrounds, ice or skating rinks, fields or courts, pools, picnic areas, walking areas and parking lots.

Take missing or lost persons to Info Booth #3 located next to the Main Merchandise Booth.

Found items can be taken to various information tents placed throughout the venue, with the primary lost and found located at Info Booth #3 located next to the Main Merchandise Booth

Alpha-numeric “Location Markers” will be posted to clearly and easily identify a location or section (by letter and number, example: CD-1) to facilitate communication in the event of an emergency.

EMS tents are located near the main entrance between 21st and 22nd, at the north and south sides of 23rd Street and Benjamin Franklin Parkway, and near the Rocky Statue to the right of the main stage.

Portable facilities, including ADA-compliant units, will be available for use throughout festival grounds. Festival attendees requiring accessible accommodations for guest screening are encouraged to enter the festival at the VIP check in at 24th and Park Towne Place.

For more information on the venue, concessions, accommodations and directions, visit www.madeinamericafest.com

‘This Bitter Earth,’ a Black Lives Matter love story, to debut in Philly

Made in America 2021: COVID protocols, parking restrictions, and more

The Made in America Festival returns to the Ben Franklin Parkway Labor Day weekend. Here’s what you need to know.