At first glance, there is nothing “shadowy” about the rise of fundraising organizations tied to Philadelphia public schools.

Often known as “Friends of” groups — as in “Friends of Adaire” or “Friends of Chester Arthur” — these independently run nonprofits are typically associated with the sunny side of public education: new playgrounds, silent-auction fundraisers, and 5K fun runs.

But researchers Ryan Good and Katharine Nelson say there is a central paradox embedded in these “Friends of” groups, which have burst onto the scene in many wealthy or gentrifying parts of Philadelphia.

While those who contribute to these groups are ideologically committed to public education and the notion of equal education for all, Good and Nelson say their fundraising efforts can exacerbate inequities among public schools.

They argue in a paper released last month in the Journal of Education Policy that the higher-income families who seem most committed to the idea of public schools are supporting them in a way that undermines their publicness.

“By virtue of their very involvement in their neighborhood school, they’re increasing the inequity across the public school system,” said Good, a professor at Eastern Mennonite University, in a recent interview. “The paradox is … investment in local public schools exacerbating inequalities across the school system.”

Good and Nelson posit these private fundraising groups are part of the “shadow state,” an academic concept that describes the use of private entities to provide goods and services once delivered directly by the government. The researchers say insufficient funding of public schools in Philadelphia has created a vacuum that private groups have filled, providing money for books, playspaces, elective courses and other items the school district cannot afford.

Good says his and Nelson’s work is an attempt to better contextualize the work of “Friends of” groups, not an attack or a suggestion that they’re necessarily bad.

“The darkness metaphor is not about nefarious intent. It’s about doing something that had been provided by the state,” Good said.

Critics, like Jeff Hornstein — who helped start a coalition of “Friends of” groups called the Friends of Neighborhood Education (FONE) — call this academic theory “silly.”

Philadelphia schools, they say, desperately need advocacy and investment. In order to create a thriving school system that reflects the city’s diversity, they argue, schools need to generate buy-in from the middle-class families that have largely abandoned the city’s public schools in recent generations.

While Hornstein believes investment in neighborhood schools could theoretically drive home values to the point where they displace poor families, he doesn’t think that’s close to reality right now in most Philadelphia neighborhoods. Instead, he sees the “Friends of” movement as a small, helpful response to inadequate school funding — one he hopes will help reverse the stigma surrounding Philadelphia’s public schools.

“[‘Friends of’ groups] are actively fighting the tendency in this country toward segregation,” Hornstein said. “And I think they should be applauded, not piloried for being gentrifiers.”

This conversation comes at a time of increasing focus on the money raised by Parent Teacher Associations and other school-fundraising groups.

A school system near Los Angeles made national headlines when it decided to pool donations made by parents of all local schools and then redistribute them. Portland, Oregon operates a similar system, Washington, D.C. is mulling one, and The New York Times recently called for the nation’s largest school district to explore a redistribution scheme.

These debates often center on large cities where there’s been a recent influx of wealthier families choosing public schools, driving fears of gentrification, displacement, segregation and the prioritization of what wealthier families want in a school environment. 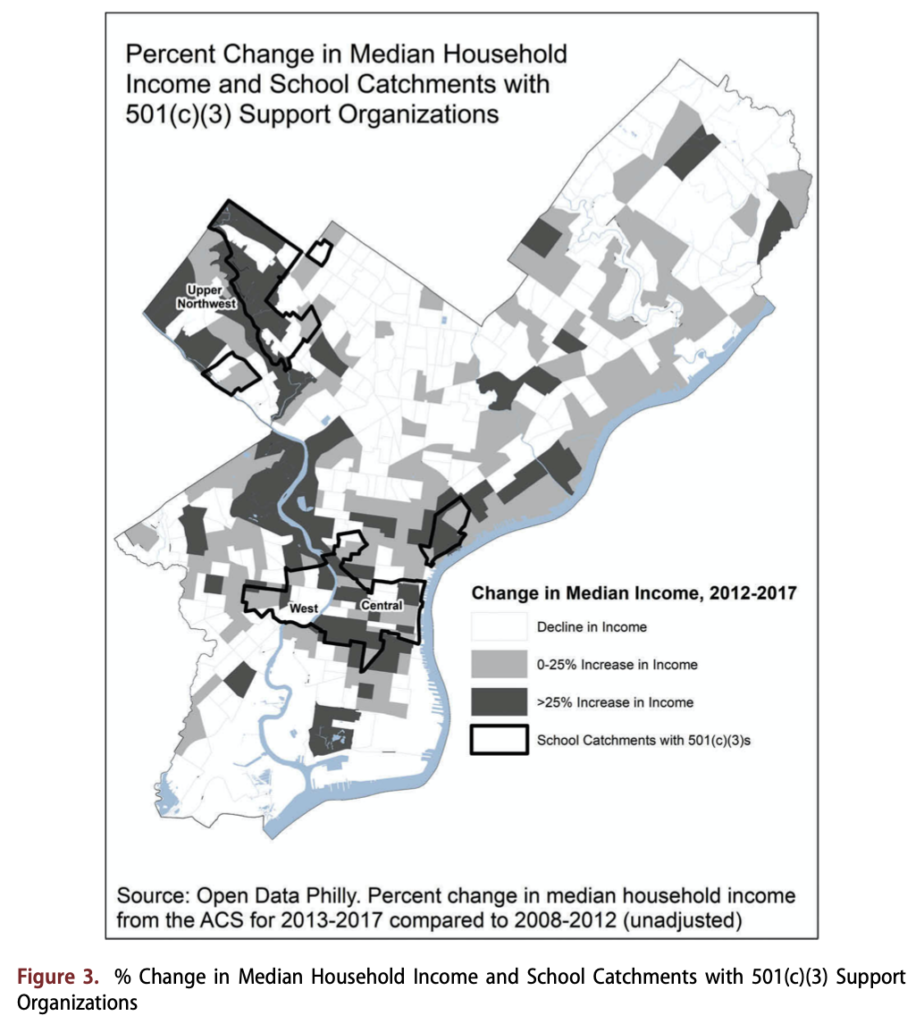 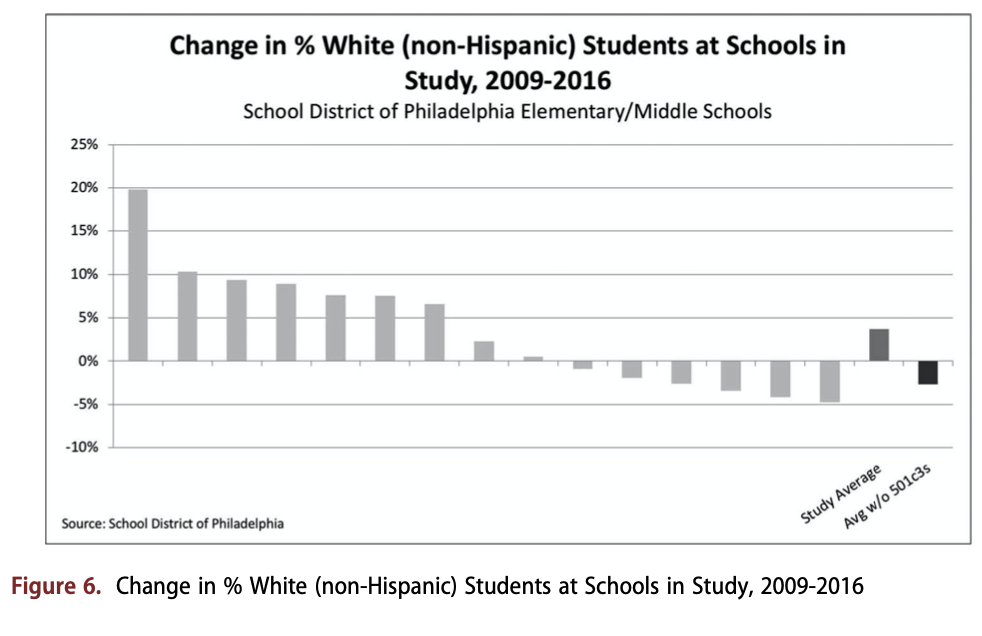 As with many academic exercises, critics wonder if Good and Nelson have strayed too far into theory and too far away from the urgent matters facing Philadelphia’s public schools.

A decades-long exodus of wealthy- and middle-class families from Philadelphia’s public schools — and the city altogether — has weakened the tax base and hurt the district’s ability to make critical investments. Luring those families back to Philadelphia and its public school system has long been a priority for city leaders.

If that pitch includes raising money for a new playground, is that necessarily a bad thing? The return of wealthier families can drive property values, strengthen tax collections and ultimately, lead to a better system for all. And on a micro-level, is it fair or prudent to tell families at a school with no art program they shouldn’t raise money to start one?

“We are in this place where the levels of government that have the biggest resources have abdicated responsibility. So people are organizing to do what they can do,” Hornstein said. “It may in the long run — the very long run — have the effect of pushing some poor people out of the system. But we’re not nearly there in Philadelphia.”

To wit, the median school examined in Good and Nelson’s study had a student body that was 79% economically disadvantaged.

The seven “Friends of” groups large enough to report revenue on their 2016 tax forms raised a combined $1,035,137 that year, according to Good and Nelson. Hornstein estimates that all of the city’s roughly two-dozen “Friends of” groups raise less than $2 million a year, an amount that he called a “rounding error” compared to the school district’s multi-billion-dollar budget.

There are, Good admits, less equitable ways that wealthy families use their money to support their children’s ambitions.

Some move to socioeconomically and racially homogenous suburban school districts, taking their tax dollars with them. Others plow tens of thousands of dollars into extracurricular activities and academic tutoring, services intended to benefit only their child instead of an entire school community.

Given the popular alternatives, one could argue that spending money to boost the circumstances and reputation of a public school in a mixed-income neighborhood is the best possible use of private dollars.

Good agrees with that sentiment.

“I don’t want to convey that this is somehow a negative — or even a net negative, “ he said.

FONE has tried to diversify its ranks. They’ve reached out to schools in lower-income neighborhoods and tried to build their fundraising capacity.

Hornstein says it would be difficult, legally, to force private “Friends of” groups to share money with other schools, as school-controlled PTA groups in other cities have done. He and other advocates have instead started a larger “giving circle” for all Philadelphia schools, although to date it has less than $10,000, Hornstein said.

Good said he hopes this research isn’t viewed as an attack on private fundraising groups, but instead a reality check on the context in which they exist.

He hopes to start a conversation around the idea that “committing to public education does not just mean committing to my local school. It means committing to the welfare of this larger system.”

“Who do you think gets on the busses to Harrisburg? This is the army,” Hornstein said. “It’s kind of offensive to me to say that these people only care about themselves.”

District leaders say calls to Philly Hopeline, the crisis hotline launched a year ago, are getting longer due to losses from the pandemic, gun violence, and racial trauma.

The majority of the board voted to follow the recommendation of a hearing officer to not renew Universal Bluford and Universal Daroff schools.

The budget changes follow a citywide survey, focus groups, and a coordinated campaign by principals and their union to guarantee five key positions in every school.