As the coronavirus epidemic continues to take a painful toll on New Jersey, African Americans appear to face an oversized burden when it comes to COVID-19 infections and related deaths.

While black residents make up just 14% of the state’s population, they account for nearly 26% of the cases diagnosed and 22% of the fatalities, according to state figures. These deaths — 2,341 as of Thursday — included nurses and medical technicians, a public-health expert and a pastor, plus scores of others who may have struggled to get tested and treated as needed.

Experts said the disproportionate impact of the coronavirus — a phenomenon now found in other places around the country — is not unexpected, given that African Americans and other communities of color have long had less access to quality health care than white residents and suffer higher rates of underlying medical conditions. But that doesn’t mean we should accept these disparities or ignore these gaps in our race to respond, they said.

“No one is surprised by this. And if they are, they haven’t been paying attention,” said Dr. Denise Rodgers, a vice chancellor at Rutgers Biomedical and Health Sciences program and professor of family medicine and community health at Rutgers Robert Wood Johnson Medical School. “There are ways in which some of these social determinants need to be addressed now, despite the fact that we are engaged in an emergency situation.”

New data released by the city shows Black Philadelphians made up 39% of 78 deaths resulting from COVID-19. White Philadelphians comprised another 29%.

Overall, COVID-19 has been found in more than 51,000 New Jersey residents, including 1,700 who have died. The toll has been particularly hard on elderly individuals and those with pre-existing conditions, two groups particularly at risk for serious health issues if they get infected. (Residents over age 80 make up less than 7% of the cases, but at least 44% of the deaths.)

But until this week, demographics on race have been scarce, sparking some calls — including a request from Sen. Ron Rice (D-Essex), a Newark leader who heads the state’s Legislative Black Caucus — for more detailed reporting and tracking. Gov. Phil Murphy has conceded the data collected to date is imperfect, but suggested they are closely monitoring the trends that emerge.

“Communities of color, we take that very seriously. This is what we had anticipated may be the case,” Murphy said at his press briefing Wednesday. The governor has started to share photos and biographical details about some of the individuals who have died from COVID-19 at these events, many of whom are nonwhite.

“In peacetime, in normal times, you’ve got certain communities that are invariably left behind, and invariably they are communities of color, so that matters a lot to us as the most diverse state in America, in particular,” Murphy said.

According to federal census data from 2018, New Jersey’s population is 67% white, 14% African American, 10% Asian and 7% another race. The state started to share demographics on fatalities earlier this week and — as of Thursday’s 1,700 deaths — 61% involved white residents, 22% were black, 6% Asian and 1% other. (Hispanics aren’t counted as a separate category.)

A summary of case data is also available through the Department of Health’s website, based on totals from the previous day. As of Wednesday — when a total of 47,437 positive cases had been tallied — 39.2% of those diagnosed are white, non-Hispanic residents, 25.8% Hispanics of all races, 25.7% black non-Hispanics, 4.8% Asians and 4.4% categorized as “other.”

All Data was reported to the NJ Department of Health as of 8 a.m. April 10. Breakdowns for all cases were not available for all categories so the data reported represents the numbers and percents of cases for which data was known. 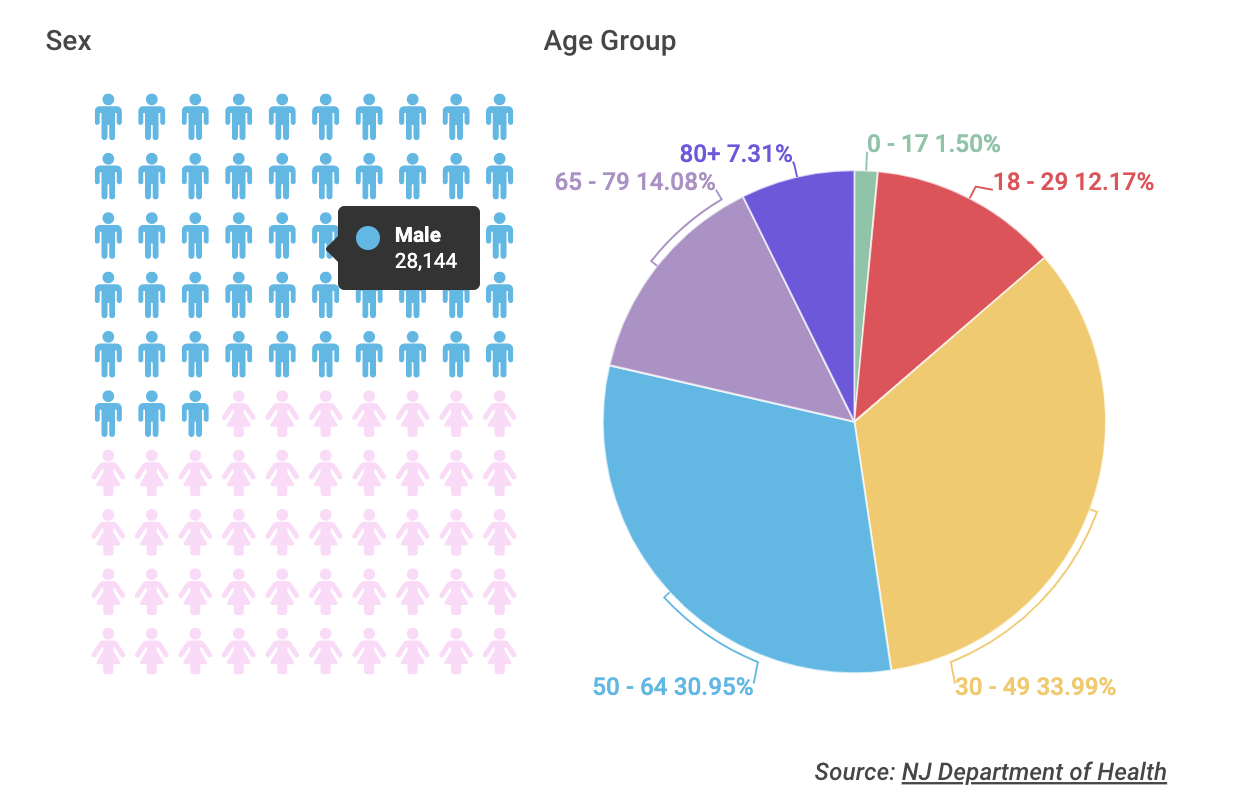 Dr. Shereef Elnahal, president and CEO of Newark’s University Hospital, which is coordinating hospital admissions for the region, said the impact is particularly hard in a “majority-minority” city like Newark. “It’s a constellation of risk factors, which just happen to be more prevalent in minority communities, but also the beautiful spiritual culture here in Newark has made it a much more difficult situation,” he said.

Studies have long showed that African American and Hispanic populations tend to have higher rates of certain chronic diseases (such as asthma, diabetes and heart disease) that put them at greater risk if they do get infected with something like COVID-19, which can impair breathing. Elnahal said environmental factors like communal living, institutional racism and even positive traditions — like Newark’s active houses of worship and history of cultural group celebrations — also put city residents at greater risk of exposure to the coronavirus.

“All of that only increases the risk of spread and increases the risk of getting the virus into the community,” Elnahal, the former state health commissioner, added. “We can see the light, and we will get there — I keep telling my staff that — but I worry that we won’t get to the end of the tunnel for a while.”

While University Hospital — now facing a surge of COVID-19 patients — has a population that is largely nonwhite, preliminary studies suggest that in some places black citizens may not have the same access to testing, let alone treatment, that white citizens enjoy. A Massachusetts-based biotech firm examined insurance data from seven states, including New Jersey, and found that African Americans with COVID-19 symptoms were less likely to be screened for the disease than other racial groups, according to Modern Healthcare.

Elnahal said he wasn’t surprised, given the long-standing racism embedded in the nation’s health care system. He said it is not unlike the racial disparities seen in maternal and infant health — with black women in New Jersey more than four times more likely to die in childbirth than white women — that results, in part, from African American mothers not having their concerns taken seriously by medical providers.

Emergencies are not colorblind

“Let’s not pretend or have any illusion that during emergency situations these class or race distinctions don’t still play out,” said Rodgers, with Rutgers University. Economic status is also likely to impact access, she said, but race can’t be ignored. “Some of us don’t find that acceptable just because it’s an emergency,” she added.

For many, the first step is better data. Although the Legislature’s work has been hampered by social-distancing restrictions, Rice plans to introduce a bill that would require hospitals to submit detailed demographic data on COVID-19 patients and deaths during the public-health emergency. It also calls for assessing how many citizens are denied treatment.

“As a result of decades-long systemic injustice throughout the nation, the poor, minorities and people of color are always subject to greater instances of disease, poor health and shorter lifespans,” Rice said in a statement announcing his plans. “COVID-19 shines a spotlight on that disparity as we see minorities, and especially Blacks, succumb to this pandemic at an alarmingly accelerated rate.”

Rice said the data is needed to help the state allocate resources to “treat, repair and empower these communities” to better respond to the epidemic. Rodgers agreed that tracking the disparity alone is not enough if we want to address the disproportionate toll these events have on black and brown communities.

“For the past 30 years we’ve done a great job at documenting (racial health) disparities and an abysmally poor job at doing anything to change or eliminate those disparities,” Rodgers said. In addition to racism itself, she blames a political culture that prioritizes tax cuts over government funding for critical public-health infrastructure.

To help address the long-standing health-care imbalance in the time of the coronavirus, Rodgers stressed the need to invest in social determinants of health — things like education, job access, and healthy food options. She credits the federal government for funding states and small businesses to help keep individuals on the payroll.

But other obvious solutions, like expanding access to health insurance through Medicaid or the Affordable Care Act marketplace, are cast aside for purely political reasons, Rodgers noted. Republicans have long resisted expanding access to the ACA and the Trump administration recently turned down New Jersey’s request to create a special enrollment period for Obamacare’s marketplace policies, although some individuals and families may still be able to obtain coverage.

“The reality is, COVID-19 could just become another in a very long list of diseases for which there are substantial disparities in outcome by race and ethnicity,” Rodgers said. “During this period of major societal disruption, how do we look at the structures we have and take bold steps?”

In the confusion and complication of vaccine rollout, these people are stepping up to fill the gap

Online, on Twitter, in Facebook groups, these people have made it a goal to help others locate not just available doses, but actual vaccination times.

Which coronavirus test should I take?

It will be a while until most of us are vaccinated. If you think you’ve been exposed, or hoping you haven’t been, knowing which test to get is important.

The head of the World Health Organization called Friday for patent rights to be waived until the end of the coronavirus pandemic.