A social justice advocacy group and some lawmakers are urging New Jersey to create a matched savings-account program for low-income residents as a way to begin to close the wealth gap between whites and people of color.

These Individual Development Accounts would operate like a 401(k), except the money could be used for more than just retirement. Under the plan, a person would deposit money every month and that amount would be matched by a nonprofit and by the state. The New Jersey Institute for Social Justice outlined its proposal Wednesday in a report titled “Reclaiming the American Dream: Expanding Financial Security and Reducing the Racial Wealth Gap Through Matched Savings Accounts.”

“Building on both state and private investments, these matched savings accounts will provide life-changing opportunities for people in our state using relatively modest investments of a few hundred dollars to a few thousand dollars per participant,” said Ryan P. Haygood, president and CEO of the New Jersey Institute for Social Justice. “We are experiencing income inequalities in the United States that we’ve not seen since the Great Depression nearly 100 years ago … New Jersey has a disaster.” 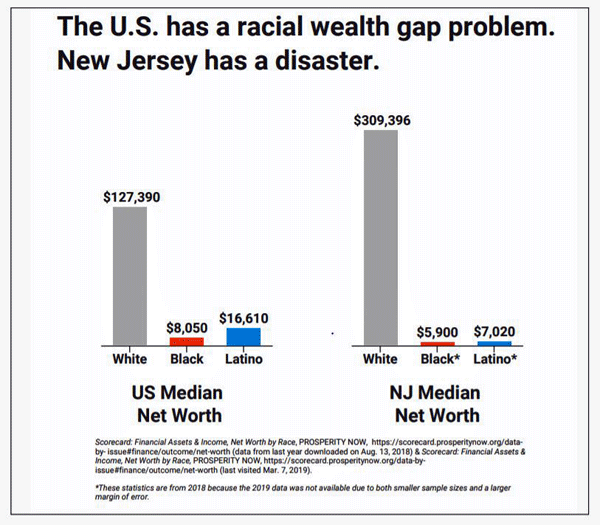 The institute sees the accounts as a way to help close the wide income gap in the state. According to its data, New Jersey has one of the worst racial wealth gaps in the nation: The median net worth for a white family is more than $309,000, while in what Haygood termed “a staggering and really shameful contrast,” it is just $7,020 for a Latino family and $5,900 for a black family.

“Right now — this is a shocking statistic — it would take a black family 228 years and a Latino family 84 years to achieve the wealth that an average white family has today in 2018,” said Demelza Baer, the institute’s senior counsel and co-author of the report. “There is also a large gender wealth gap which far outstrips the gender pay gap.”

While state data is not available, Baer said that nationally, single women have a median net worth of $3,210, with just $200 for single black women and $100 for Latinas. Single white men have a net worth of $28,900.

“These disparities are driven by differences in home ownership … because the most significant asset that most Americans own is their home,” Baer continued. “Importantly, our differences in home ownership and wealth were driven by government programs that expanded home ownership primarily for white men who were the only people who could legally own property and did not face discrimination on the basis of their race and gender in purchasing a home or land or paying a mortgage for most of our country’s history.”

New Jersey already has an IDA program that was put in place in 2001, but it is primarily for those who are current or past participants in Work First New Jersey and those with an income of no more than twice the federal poverty level, or $24,980 for a single person this year. The state match is a dollar-for-dollar, up to $1,500 a year for three years. Individuals can use the money only to buy a house, pay for education, or start a small business. The program is funded with federal dollars through the Temporary Assistance for Needy Families program. The Department of Community Affairs, which oversees the current IDA program, did not respond to a request for its cost or the number of participants. 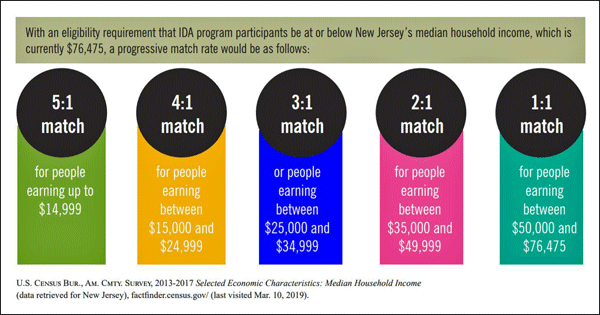 The new accounts would be offered by nonprofit or community organizations in conjunction with a bank, with matching funds coming from the sponsoring group and state coffers. Eight organizationsoperate the current IDAs and serve every county except Passaic.

The new program the institute is calling for would be more expansive. It would:

Opening up the program

Sen. Nilsa Cruz-Perez (D-Camden) sponsored the current IDA program and has authored a bill (S-1575) that would expand that. It doesn’t go as far as the institute is recommending, but Cruz-Perez said she is planning to amend her measure to open the IDAs to even more participants.

“Families of New Jersey are working very hard day in and day out,” she said. “It is time we address the income inequality and put additional provisions in place.”

The report cites a number of other states that are operating successfully. Oregon’s program, the largest in the nation, is paid in part with $7.5 million a year in state income-tax credits given to those who donate to it; the credits sell out every year. Since 2008, more than 11,000 people have participated in IDAs and saved a combined $20 million, with $29 million in matching funds distributed, according to the Oregon IDA Initiative website. Currently, close to 3,400 people are in the program.

In addition to the welfare-funded IDAs, the federal government used to provide as much as $25 million a year to states that offered these accounts. Congress voted to cut the program from the budget in 2017, but many programs continue to operate with funds issued in previous years.

Will it fly in New Jersey?

Given New Jersey’s continuing budgetary constraints, it is unclear where the money would come from and how much an expansive program like this might cost. Laurie Beacham, an institute spokeswoman, said the program “could likely be started with a few million dollars of investment, leveraged with donations from eligible tax payers receiving a certain number of tax credits in exchange for their donation.”

Haygood said that if the state considers closing the wealth gap important enough, it will be able to find some money for an IDA program.

IDAs are a program Gov. Phil Murphy would likely get behind if the money were available. He told the NJ Spotlight editorial board last Thursday that he is focused on trying to close the wealth gap.

“There are huge wealth diversities,” Murphy said. Referring to the institute’s estimates of the wealth gap between the races, he said, “They’re so bad, I thought and many thought a zero had been dropped, and even then they would have been bad.”

The governor further expressed support for a similar proposal by New Jersey Democratic Sen. Cory Booker that, at the federal level, would give all newborns in the United States an initial deposit of $1,000 and make additional annual contributions through age 18 of up to $2,000, depending on wealth, with those at the lowest income levels receiving the largest amounts.

“Senator Booker … has this baby bonds idea, which I personally love,” Murphy said, though he added, “I’m not sure as a state we can do that.”

Robert E. Friedman, founder of the national nonprofit Prosperity Now, which is dedicated to expanding economic opportunities for those with low incomes, was an early champion of IDAs. He anticipated a potential criticism of the program.

Gavin Taylor, manager of the financial empowerment center at the United Way of Essex and West Hudson and former manager of its IDA initiative, called that program “one of the most powerful programs I have personally seen to help decrease the wealth gap.”

Tamika Thomas participated in that program and, as a result, was able to buy a house.

“Without an IDA, I never would have been able to finally fulfill my dream of homeownership,” said Thomas, of Newark. “I was a single mother of four and using most of my income to pay the rent. Having a matched savings plan available to help me save was a blessing … It helped me reach my goal of owning a home faster than I expected … I strongly support expanding New Jersey’s IDA program so that other people can benefit from similar opportunities.”

Money is designed to recycle industrial locations for new uses.

Last year, New Jersey borrowed about $4 billion to sustain the budget amid the COVID-19 pandemic, and to make that happen, the state was charged more than $12 million in fees.

A record year for N.J. sports betting; casinos, not so much

Over $6 billion worth of bets were placed last year in New Jersey, which won a Supreme Court case in 2018 that cleared the way for the expansion of legalized sports betting.