The Murphy administration is investing $5 million to launch a revamped version of the Reach NJ campaign, the effective but controversial public outreach platform created by — and once featuring — former Gov. Chris Christie that helped connect people impacted by addiction to drug treatment and other services.

But this time the state Department of Human Services will skip the television commercials, which became a lightning rod for Christie. Instead, it will focus on print and online ads targeted to reach residents in a half-dozen counties with the highest overdose rates. In addition, the Reach NJ hotline (which is available statewide) is now set up so that callers will always reach a live, trained operator any time of the day or night.

In a pilot project launched earlier this month, the DHS posted a link to the new Reach NJ page under the headline “Addiction Help. Always Here. Always Live.” The page includes an online-chat feature, information about substance use disorders, links to support services, and a toolkit to help local officials tackle the impacts of addiction in their community. (Some of these features were also available under the previous iteration of the website, set up by Christie’s administration.)

Hotline will be available 24/7

While Reach NJ material has changed appearance under this rebranding, the hotline number remains the same as in the Christie era: 844-732-2465 (or 844-ReachNJ). The line, active 24/7, connects callers with a professional screener who can evaluate their situation and link them, through a direct transfer, to treatment, counseling or other services. In the past, officials said some callers were forced to leave a message and wait for someone to get back to them.

“When you are struggling with substance use disorder and are ready for treatment, we want to be ready for you. That’s why we are piloting a new approach to our addiction treatment hotline,” DHS Commissioner Carole Johnson said Wednesday. “We’ve restructured the program so that when you call for help you reach live, trained responders who have worked with New Jersey’s treatment providers and know how to connect you with help.”

Behavioral health providers welcomed the new outreach, which they said is critical to helping individuals and families connect with the right care. Tens of thousands of New Jerseyans require addiction treatment each year, and many more are unable to get the help they need; in 2018, some 3,000 residents died of complications related to the disease.

“There is so much need out there, and people need to know where to go,” said Carolyn Beauchamp, president and CEO of the Mental Health Association in New Jersey, which advocates for mental health and addiction service providers. MHA also operates the NJ Connect for Recovery hotline (855-652-3737), a state-funded program that helps family members impacted by addiction; it is also one of the services that Reach NJ operators use to help callers.

While members of the public and some lawmakers criticized Christie for what they considered heavy spending on the publicity facets of his anti-addiction initiatives — he committed $43 million in his final year in office to television, radio and web ads, among other outreach — data shows it had an impact, driving up call volume significantly to the Reach NJ line and other services. (The funding came from money left over in various accounts, including those set up to fund college tuition, pre-school expansion, and school construction, infuriating some legislators.)

When Gov. Phil Murphy took office in January 2018, he pledged to build on aspects of Christie’s legacy in addressing the state’s opioid epidemic, but in a new way, with a greater focus on data and outcomes — and with less spending on publicity. On his first day in office, the governor suspended the most visible aspect of the Reach NJ campaign, a series of TV commercials in which Christie appeared alongside individuals in recovery; Murphy also ordered his staff to review other initiatives.

The move pleased critics but raised worries among providers. Without regular, prime-time pitches on network TV, calls to the Reach NJ hotline began to drop. Operators had received an average of 125 calls a day at the start of January 2018 with a peak of 167 on the 9th, but there was a sharp drop when the ads were pulled on the 17th, and by the month’s end they were getting less than 35 daily inquiries. 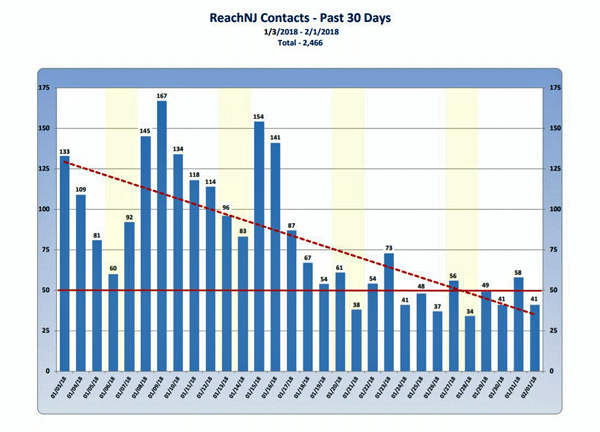 State officials declined to say why they did not opt to include television ads this time, something that advocates like Beauchamp said were particularly effective in helping people access care.

The DHS will invest another $1 million to expand capacity at the Reach NJ call center run by Rutgers University Behavioral Health Care, which oversees a wide range of state-supported mental health and addiction programs. Operators at this facility are trained to assess a caller’s emotional state, level of support and insurance options, and directly connect them with appropriate treatment or other services. No one will need to leave a message and wait for help, officials said.

DHS Commissioner Johnson called the Reach NJ line “one more tool in our strategy to get folks with opioid addiction on the path to recovery. Call us — we are here to help.”

The outreach is part of a larger Murphy administration effort to combat addiction by reducing access to legal and illegal opiates, easing access to treatment, and expanding insurance coverage for low-income residents. Murphy has also followed the advice of experts who have urged him to unravel certain Christie-era initiatives related to addiction treatment; this includes returning most of the functions of the Division of Mental Health and Addiction Services to the DHS less than a year after the former governor suddenly shifted it under the purview of the state Department of Health.

With fentanyl driving fatal overdoses to record levels in the U.S., state governments are scrambling for solutions.

Pa. is on the brink of regulating recovery homes for the first time

The Wolf administration could implement new oversight of recovery homes by mid-2022, though challenges could cause delays.

Governor Tom Wolf said more needs to be done after touring Kensington and seeing firsthand the impact opioid use can take on a neighborhood.