A vaccination card is now as important as a credit/debit card when you head to Philadelphia restaurants. They are required for all venues that serve food — including catering halls, sports arenas, and movie theaters. (Grocery stores are one exception.) For the first two weeks of the mandate, a negative COVID-19 test taken within the last 24 hours will also be accepted.

Make sure to double-check refund policies as events may be subject to change or cancellation, and expect both proof of vaccination and masks to be mandatory at almost every public event.

Dr. Rev. Martin Luther King, Jr. is celebrated in the Delaware Valley over the weekend and on the King holiday’s official date, Monday, Jan. 17.  Though the omicron variant has forced adjustments, some events are still in-person, though many are virtual or offer hybrid options.

A post shared by African American Museum In PHL (@aampmuseum)

The African American Museum in Philadelphia’s annual MLK Day  celebration’s 2021 theme “Grassroots and Grand Strategies” is mostly virtual this year, though it will be open for a limited capacity crowd Saturday through Monday. Philly spoken word artist Lyrispect curates “Disruption: Poetry and Open Mic” online on Friday. On Saturday, there is an in-person arts event for kids 6-13, and a virtual Emmitt Till book discussion and MLK documentary film screening. Events continue online on Sunday and Monday.

In conjunction with the life that Dr. King led, the King holiday has become a national day of service along with a celebration of his life. There are volunteer opportunities worldwide, but Philadelphia has historically been a place where the day of service provides a host of chances to do good deeds in King’s name. Here’s a list, including a Philadelphia Youth Basketball sponsored cleanup; a number of community service opportunities in West Philadelphia; making blankets for the homeless in Pennsauken, N.J; Penn Valley’s Beth Am Israel’s MLK Day of Service that includes virtual discussions and hands-on service projects; and the Social Impact Cafe’s Day of Service with a live painting workshop and free lunch and books for families.

The National Constitution Center is a place centered around the highest ideals of America’s founders, no matter how unequally they were applied for hundreds of years. Thus, in principle, they exemplify everything Martin Luther King Jr. dedicated his life to. The venue’s MLK Day options include a family concert, a story corner, a school supplies drive, and a reading of the “I Have A Dream” speech.

In one of the more unique MLK holiday offerings, Eastern State Penitentiary offers a dramatic reading of “Letter From a Birmingham Jail” the letter King composed while incarcerated in 1963. Denied even basic writing implements, he wrote the letter with a pencil smuggled in by his lawyers on the margins of a newspaper. Its famous line, “Justice too long delayed is justice denied” remains relevant today. Hosted by Starfire, the reading will be done by a diverse group of activists, artists, politicians, educators, and students. 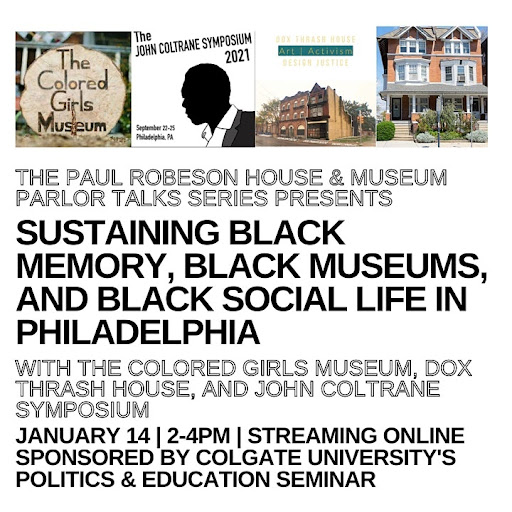 Representatives from The Colored Girls Museum, the Dox Thrash House, and the John Coltrane symposium come together to have an online discussion about the importance of preserving significant elements of Black history and how they are doing so via their various cultural sites and initiatives. Colgate University’s Politics & Education Seminar is sponsoring the event.

Harriet Tubman would have celebrated her 200th birthday this year. The American she-ro helped more than 70 enslaved people to freedom. Her own journey took her from Maryland to Delaware to Philadelphia, the city where she took her first free breaths. In memory of her life, a nine-foot statue of Tubman saving an enslaved child will be on display through March 31 outside of City Hall. While it’s there, a series of events, including discussions, exhibits, film screenings, and more will amplify and celebrate her legacy.

It’s believed that the Mesozoic era, when dinosaurs walked the earth, ended when an asteroid hit the planet over 250 million years ago. What we know for sure is that the ginormous creatures are now extinct, except in the imagination of animatronics engineers. Two dinosaur events are in the area this weekend — Jurassic Quest, billed as the “largest and most realistic” — and Dino and Dragon Stroll, which is billed as the “newest and biggest.” We’ll let you (and your kids) be the judge.

The latest adaptation of the classic 1947 play by Tennessee Williams enjoyed one performance on the Arden stage in 2020 before its run was cut short by COVID. Now it’s back, to open the venerated local theater’s 2022 Mainstage season. It stars Katharine Powell as Blanche DuBois, Emilie Krause as Stella Kowalski, and Matteo Scammell as Stanley Kowalski, the role originated on Broadway by Marlon Brando which he reprised in the 1951 film.

Detroit-born instrumentalist Lorenzo Williams is the keyboardist and musical director for the acclaimed hip-hop group Foreign Exchange and has also contributed to the sounds of the TV shows “Black Dynamite” and “Sherman’s Showcase.” In 2016, as Zo!, Williams released a solo project, “SkyBreak” along with a behind-the-scenes documentary. In 2021, he and producer Tall Black Guy put out the album “Abstractions” a mix of lush jazz/R&B/soul and hip-hop. The duo will be joined by musical collaborators like Phonte and more for their City Winery show.

Wynton Marsalis and Bucks-Montco Pride Fest are also among Philly, Delaware, and N.J. events this weekend for the kickoff of the official summer season.

Juneteenth, Father’s Day, Lisa Loeb, Kidchella in this week’s ‘Things to Do’

Foodtruck Frenzy, Brian McKnight and Movies On The Block are also on tap as Juneteenth and Father’s Day celebrations share the weekend calendar.

Festivals and live music continue their comeback as this weekend’s events also include the Wayne Music Fest, Suburban PRIDE, and Lin-Manuel Miranda.