Citing a growing death toll from mass shootings in the U.S., Gov. Phil Murphy released a promised batch of data this week on gun crime in New Jersey, highlighting the cities and counties where the most illegal firearms were recovered, as well as the caliber of those guns.

The data also showed where guns recovered in New Jersey were initially purchased. It’s part of Murphy’s push to “name and shame” states with less restrictive gun laws, where guns are often bought, smuggled across state lines, and then resold on the black market in New Jersey.

Since taking office in January, the Democrat has pledged to harden New Jersey’s already strict gun laws. He has created a coalition of states – including New York, Connecticut, Rhode Island, Massachusetts, and Delaware — to combat gun violence.

“New Jersey has some of the toughest gun laws,” Murphy said at a press conference Tuesday, “but we cannot and will not rest on our laurels.”

It is common for gun smugglers to traffic firearms from a state where it’s easy to buy guns to a state where it’s more difficult, like New Jersey, but some law enforcement officials said the numbers released by Murphy targeting other states may not tell the whole story.

“You need to know more than just how many guns are coming from a particular state. You have to get down into the data,” said William Vizzard, a criminal justice professor at California State University and a former special agent with the Bureau of Alcohol, Tobacco, Firearms, and Explosives (ATF).

The data released by the Murphy administration consisted of ATF traces of “crime guns,” the firearms that police believe were used in crimes or that officers simply found.

In the first three months of this year, 83 crime guns were traced to the neighboring commonwealth of Pennsylvania, the highest number of any state other than New Jersey. (One-hundred twenty-six crime guns that were recovered in the Garden State were also purchased there.) Just this week, a Pennsylvania man was arrested and charged with reselling guns in New Jersey that he bought in his home state. According to NJ.com, electronics technician Matthew Okie allegedly sold an AK-47 rifle, three AR-15 rifles, seven high-capacity magazines, and more than 100 rounds of ammunition to an undercover detective in the Bergen County prosecutor’s office.

Pennsylvania was followed on the list by Georgia (59) and North Carolina (58).

While officials noted that many states had looser gun laws than New Jersey, Vizzard said simply publishing the raw numbers of guns traced to “source states” omits important context about the backstory of each firearm seizure — context that matters to law enforcement officers hoping to target the most violent offenders. 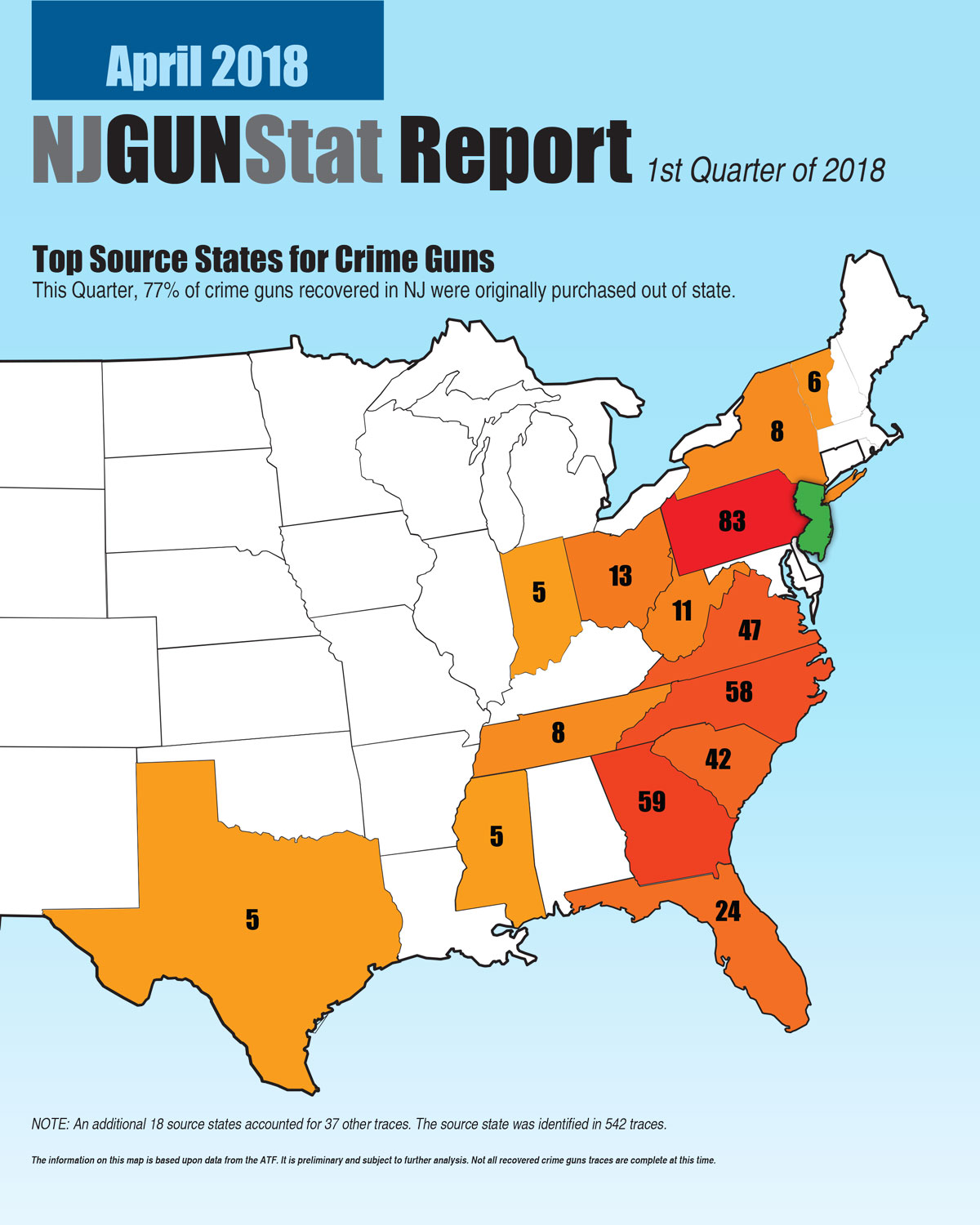 For instance, the numbers do not indicate whether a gun was initially purchased for a lawful use like recreational shooting and got into the wrong hands, or whether it was bought for the express purpose of illegal resale.

Others praised Murphy for calling attention to the well-established pattern of illegal firearms moving from “source states” to “receiver states” such as New Jersey.

Joseph Vince is a lecturer at Mount St. Mary’s University and a former ATF special agent who traced and analyzed crime guns for the bureau. Referring to the fact that 77 percent of crime guns recovered in the first quarter of this year came from outside New Jersey, Vince said, “it’s a lot more than half of your problem. So, stop it.”

A cursory glance at the map of source state traces published on the New Jersey State Police’s website shows that crime guns appear to be traveling from southern states along the Atlantic coastline up Interstate 95 into New Jersey, an “iron pipeline” former law enforcement officials said has existed for years.

Although some viewed Murphy’s tactic of calling out states with less restrictive guns laws as a blunt instrument, public shaming seems to have worked before.

In the early 1990s, Virginia was developing a reputation as a hub for gun trafficking. Its laws were relaxed, and it was located near states that had tighter restrictions on purchasing firearms, including New Jersey and New York. In an effort to combat that trend, Virginia legislators passed a law in 1993 limiting residents to buying one handgun per month.

The law apparently worked. Supporters said fewer guns purchased in Virginia were turning up at crime scenes in what were traditionally “receiver states.”

But six years ago, claiming that the growth in federal background checks had rendered the commonwealth’s one-handgun-a-month law moot, Virginia lawmakers repealed it.

On the list of states where crime guns picked up in New Jersey this year were originally purchased, Virginia ranked fourth.

More segments from NewsWorks Tonight, May 10, 2018

Year of the woman presents tough choices in Philly-area races

N.J. files brief to block an injunction over the fate of the Waterfront Commission

New Jersey intended to replace the commission with the New Jersey State Police next week. Now those plans are up in the air.

Murphy says he plans to close N.J.’s only women’s prison

The January events at the Edna Mahan Correctional Facility for Women have led to criminal charges against 10 guards by the state AG, whose investigation is still underway.

Rachel Wainer Apter, currently head of the state’s civil rights division, would be the 41st justice of New Jersey’s highest court if confirmed.