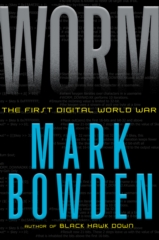 Journalist MARK BOWDEN returns to the Radio Times studio to discuss his investigative reporting on a computer virus that infected about 1.5 million computers world-wide in November 2008. This ‘Conficker’ worm inspired a volunteer group of security experts, outside of the U.S. government, to work together to figure out who was behind this (still unknown), and created a record used by the Department of Homeland Security. The worm is still out there, and has made many people conscientious of updating their antivirus software on their PCs. The cautionary implications for the power of international malware that can potentially take down banks, energy flow and air-traffic is still present. Bowden, former longtime Philadelphia Inquirer reporter and the author of “Black Hawk Down,” has written a new book on this potential catastrophe called “Worm: The First Digital World War.”

A NASA spacecraft named Lucy has rocketed into the sky with diamonds on a 12-year quest to explore a record-setting eight asteroids.

The modern world is made possible by a web of electromagnetic radiation. Your phone, computer, TV, cable box, radio — all depend on mil ...

Some of the top women in Delaware’s growing life sciences industry offered advice for students and others looking to work in STEM fields in an online symposium.