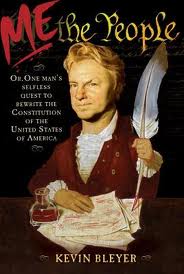 The United States Constitution promised a More Perfect Union, but will we ever get a more perfect Constitution? The Daily Show writer KEVIN BLEYER has heeded that call with his new book, “Me the People: One Man’s Selfless Quest to Rewrite the Constitution of the United States of America.” Bleyer says he took on the daunting task of rewriting one of America’s most famed documents because we have made have the terrible mistake of putting faith in a document, “written by farmers, scrawled on animal skin, disseminated more than two centuries ago, conceived in desperation in the aftermath of war, composed in the language of the country it was intended to spurn, and, not for nothing, scribbled by hand with the quill of a goose.”  This hour we’ll talk to the Emmy award-winning writer about his version of the Constitution or as he calls it, “the most important document of our time.”