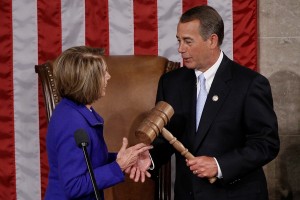 As Republicans took control of the House on Wednesday, new speaker of the house John Boehner pledged to repeal the new health care law, reduce wasteful spending and cut taxes.  The House immediately approved a set of new rules to expedite their goals including a requirement that any new spending must be offset by spending cuts and another mandating that lawmakers will have to go on record in voting to increase in the federal debt.  On the Senate side there was a debate on filibuster rules and a plea by Senate leader Harry Reid for Republicans to work cooperatively with Democrats when they consider deficit reduction, the war in Afghanistan, health-care reform and taxes.  We’ll talk about the road ahead for the 112th Congress with DAVID HERSZENHORN of the New York Times JAY NEWTON SMALL of Time Magazine.