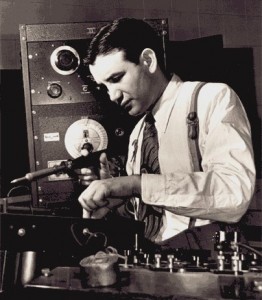 Raymond Scott is not a household name, but his music has likely played in your home in the Warner Brothers’ Looney Tunes and Merry Melodies shorts. Fast-forward to the 90s’ manic cartoon, Ren and Stimpy – Scott’s compositions were also used to underscore those animated characters  and many other recent popular TV cartoons. The composer and inventor, whose first hit single was recorded by Louis Armstrong, and the bandleader on NBC television’s “Your Hit Parade” in the 1950s, has been called ‘The Man Who Made Cartoons Swing.’ But he was most interested in projects not well known to the general public. Scott’s career spanned from the mid-30s as a pianist for the CBS Radio house band, to his eponymous “Quintette,” all the while toiling away as audio engineer, using multi-tracks in the 40s and earning a reputation as an electronic instrument pioneer. Mo-Town’s founder Berry Gordy allowed Scott to concentrate on his inventor life, tapping him to be the director of electronic music and research department in the 70s. Scott also composed for film, the ballet and for Broadway. Our guest, STAN WARNOW, Scott’s son, produced, directed, photographed and edited a very personal documentary about his father called Deconstructing Dad: The Music, Machines and Mystery of Raymond Scott. JEFF WINNER, a Scott historian, archivist and co-producer of the film, also joins us to discuss this musical DNA of the 20th Century.

Benjamin L. Bynum Sr. was a longtime Philadelphia entrepreneur and patriarch of a family associated with popular restaurants and jazz and blues venues in the city.