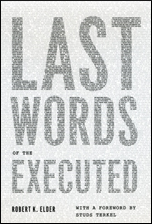 Journalism professor ROBERT K. ELDER has compiled an account of the final words uttered by men and women in U.S. prisons about to be executed. He documents the often remorseful, occasionally humorous, often heart-wrenching, and increasingly political statements with which condemned men and women chose to leave this world. From newspaper accounts, prison archives and priests’ recollections, Elder documents the last words of the famous – including Nathan Hale, Sacco & Vanzetti, Julius & Ethel Rosenberg and Joe Hill – the infamous, including Ted Bundy, Aileen Wuornos, John Wayne Gacy and Timothy McVeigh – and the unknown. Today on Radio Times, we’ll hear and discuss some of those last words.

The bill is rooted in recent data that show Philadelphia police pull over a disproportionate number of Black drivers for minor traffic violations.

Advocates say a new federal holiday is nice, but it’s no substitute for policy change. On the federal level, most of the big proposals have stalled.