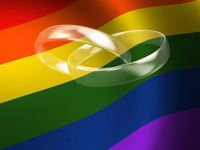 A bill to legalize same-sex marriages will be voted on by the New Jersey Senate tomorrow [12/10]. Supporters hope the lame-duck Legislature approves it so that lame-duck Democratic Governor Jon Corzine can sign it before Republican Chris Christie takes office, as Christie has vowed to veto the bill. Today on Radio Times, Marty will talk to LEN DEO of the New Jersey Family Policy Council, an opponent of same sex marriage, and a supporter, ED BAROCAS of the American Civil Liberties Union of New Jersey. Then we’ll hear from a pair of columnists, the Newark Star-Ledger’s PAUL MULSHINE, who opposes the bill, and Bergen Record editorial page editor ALFRED DOBLIN, who supports it.
Listen to the mp3