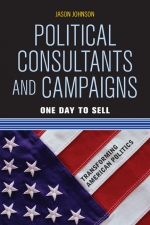 Forget what you learned in poli-sci; that won’t help you much in understanding modern political campaigns. In his new book, Political Consultants and Campaigns: One Day to Sell, JASON A. JOHNSON explores the difference between how political science theory suggests campaigns should be run and how political consultants actually run campaigns. Based on hundreds of interviews with political consultants and strategists, the Hiram College political science professor sheds light on the messaging, media strategies, positioning and negative campaigning that drives the modern political circus.  We’ll also call out to one of the trade’s more successful local practitioners, NEIL OXMAN, president of The Campaign Group, a media strategy organization working with Democratic candidates.