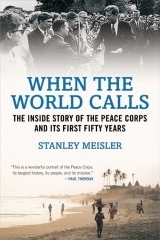 In the first part of our 2-part look at the 50th anniversary of the Peace Corps, we’ll interview STANLEY MEISLER, author of the new book, When The World Calls: The Inside Story Of The Peace Corps And Its First Fifty Years. Meisler was deputy director of the Peace Corps’ Office of Evaluation and Research in its early years, later becoming a foreign and diplomatic correspondent for the Los Angeles Times. In his new book, he documents the tangled history, inspiring volunteers and cultural exchanges of the Peace Corps, as well as its tricky relationship with several U.S. presidents.