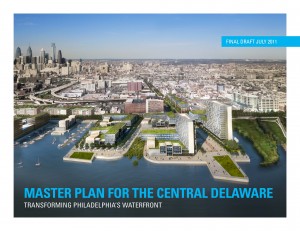 Last week, the Philadelphia City Planning Commission approved the Civic Vision for the Central Delaware, an ambitious guide for the next several decades of development along Philadelphia’s eastern waterfront. In a planning process that dates back to at least 2006 and has involved thousands of Philadelphia residents at dozens of public meetings, waterfront stakeholders crafted a set of principles, guidelines and specific maps for what they hoped would come to the Delaware River waterfront. Now that the Planning Commission has adopted the plan, the city, waterfront landowners and civic groups will engage in the delicate dance of inviting and attracting the kinds of riverfront projects the plan calls for while respecting property rights and somehow finding the money to pay for it all. Joining us to discuss the planning process then, now and tomorrow are ALAN GREENBERGER, deputy mayor of Philadelphia for Economic Development and Director of Commerce, executive director of the Planning Commission and board member of the Delaware River Waterfront Corporation; and MATT RUBEN, president of the Northern Liberties Neighbors Association and chairman of the Central Delaware Advocacy Group, representing 21 civic associations along the Delaware.