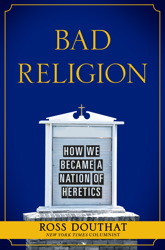 Then, the Republican frontrunner for the American presidency is a Mormon. For the last several months Mitt Romney was running close in the GOP polls next to conservative Catholic Rick Santorum, before he suspended his presidential campaign. President Barack Obama, a Christian, was seen as a savior figure in 2008, who followed born-again Christian George W. Bush, according to our guest, New York Times Op-Ed columnist ROSS DOUTHAT. Douthat sees the most potent theories behind politics are based in religion and he comes in to discuss his provocative view of mainstream Christianity’s decline in the United States through the 1950s up through the Obama administration. Ross Douthat looks at the celebrity televangelists and theological scholars he considers heretical, including Joel Osteen, Dan Brown and Elaine Pagels, and calls for a revival of traditional Christianity in his new book, “Bad Religion: How We Became a Nation of Heretics.”

Salman Rushdie ‘on the road to recovery,’ agent says

Salman Rushdie's agent says the author is “on the road to recovery” two days after suffering serious injuries in a stabbing at a lecture in upstate New York.

The SBC’s statement gave few details about the investigation, but indicated it dealt with sexual abuse.

What’s up in Iowa?