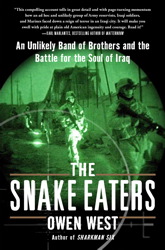 Combat advisors have been vital actors in the wars in Iraq and Afghanistan, as they train indigenous security forces to fight their own conflicts. Our guest, OWEN WEST, a third-generation Marine, says military advising is a task many generals don’t understand, as he led a small group of U.S. reservists, Marines and Iraqi soldiers in 2006-2007, in the city of Khalidya, in the Anbar Province, during a particularly violent peak in the Iraq War. The Ivy League-educated West served two tours in Iraq on leaves-of-absence from his energy-trading job at Goldman Sachs to fight with and train these troops with a varied background of military training. Owen’s personal account of this mission is his third book, “The Snake Eaters,” and his first work of nonfiction.