What has four wheels and a lot to say about impeachment?

That would be a mobile billboard paid for by two liberal lobbying groups targeting Pennsylvania Republican congressmen Scott Perry and Brian Fitzpatrick over their support of President Donald Trump.

With votes on two articles of impeachment in the U.S. House of Representatives expected this week, interest groups have been pouring hundreds of thousands of dollars into related advertising campaigns in the commonwealth.

Attitudes among the Pennsylvania delegation about whether to impeach President Trump break along party lines. Even so, both conservative and liberal groups are using the proceedings to spread negative messages about representatives in swing districts, with an eye towards 2020.

.@moveon has a rolling billboard targeting @RepScottPerry in the #pa10. It was a bit of a hit and more photos coming soon! pic.twitter.com/6rhEzVKq9R

Republican interest groups attacking these candidates dominate broadcast television ad spending in the commonwealth. Starting in November, the American Action Network, a self-described center-right “action tack,” has spent $8.5 million, according to the group. (In the Philadelphia media market, that has meant more than $62,000 targeting New Jersey Democrat Andy Kim.)

In Pittsburgh, American Action Network spent at least $85,000 with ads directed at Lamb, according to Federal Communication Commission records.

In the Scranton/Wilkes-Barre metro area, AAN has spent at least $51,310 on broadcast TV ads since mid-November. A Trump-affiliated PAC called America First Policies PAC has spent more than $37,450. Both have targeted Cartwright, according to political advertising invoices reported to the FCC.

Those numbers are likely undercounts, say consultants who work in political advertising.

Cartwright’s own campaign estimates the total number of broadcast and cable ads to be much higher — $460,000 over the last two months, according to The Hill.

Cartwright told the D.C. media outlet that the ads have led to a flurry of calls to his office about impeachment.

Alongside television spots, American Action Network and America First Policies are running banner ads online, in some cases praising Republicans like Fitzpatrick for “working on the issues we care about.”

By contrast, liberal groups urging impeachment appear to be spending less and taking a different tack. The groups MoveOn and Need to Impeach, which made the mobile billboard that visited Perry’s and Fitzpatrick’s districts, spent five figures on the campaign in an attempt to influence potentially vulnerable Republicans. The groups are also gearing up for “No One is Above the Law” rallies slated for the night before an impeachment vote.

Perry’s midstate district is listed a “toss-up” by the Cook Political Report, as he faces a challenge from Auditor General Eugene DePasquale, a York County Democrat.

Fitzpatrick’s Bucks County district has been trending in Democrats’ favor, and the congressman has been unafraid to occasionally vote across party lines.

“We saw just this week that [Brian Fitzpatrick] was the only Republican to vote with Democrats for the Voting Rights Act continuation,” said David Sievers, campaign director with MoveOn. “We’re really hopeful that when it comes time to vote [on impeachment] that he’ll do the same, that he’ll put partisanship aside.” 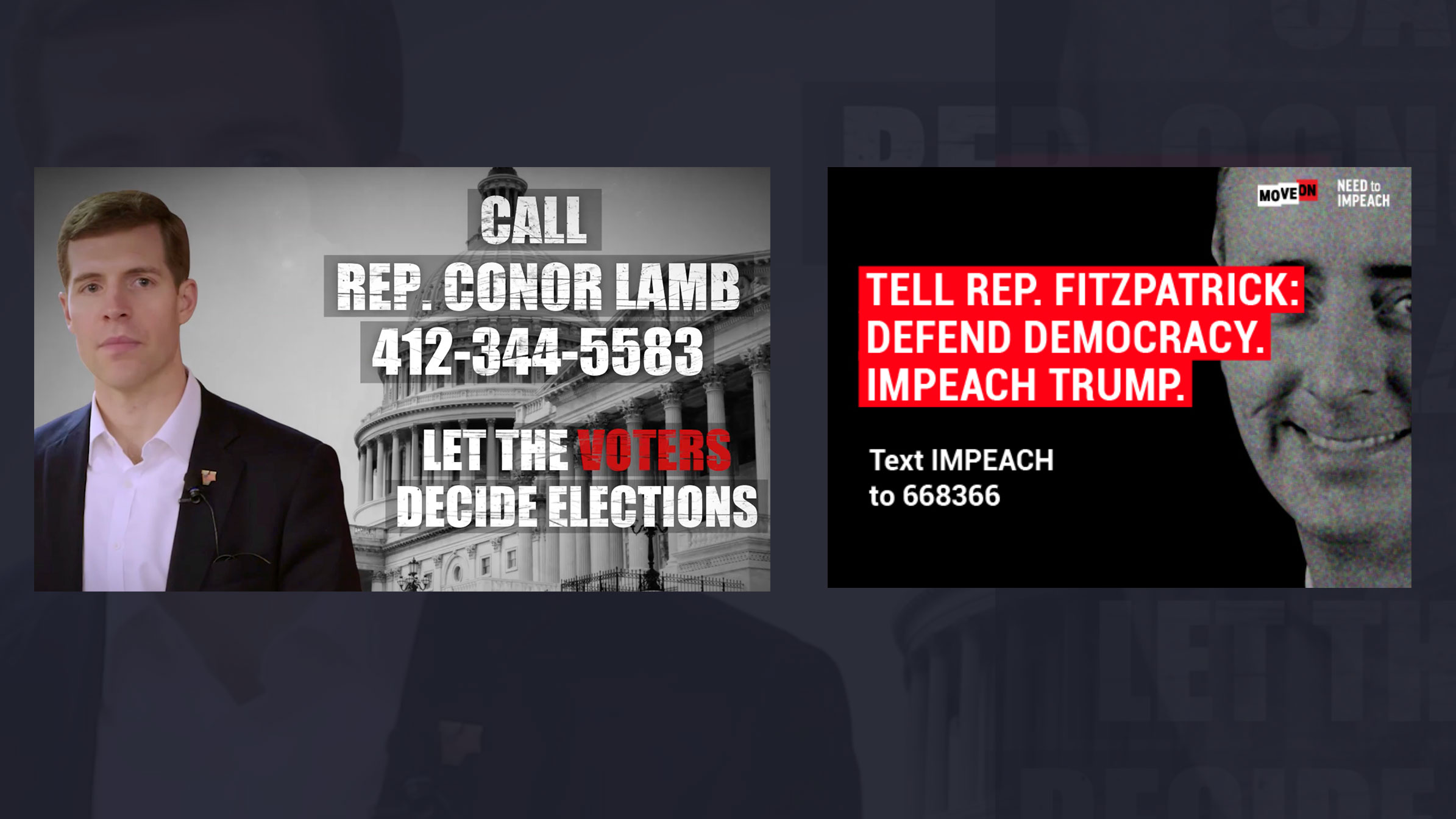 Fitzpatrick, though, says he’s made up his mind already.

“I will be voting ‘no’ on both articles,” said Fitzpatrick, who said he felt like the impeachment process needed to be based on an independent and nonpartisan law enforcement investigation.

Nearly all Democrats seem poised to vote with their party. Cartwright, who had been reluctant to make a public statement,  wrote about his support for impeachment in an op-ed over the weekend.

“Evidence has surfaced that Trump’s actions subverted both national security and American electoral sovereignty, abuses of office that even Nixon never committed,” he wrote in the USA Today.

Lamb expressed his support for impeachment in interviews last week.

“I think that the articles were pretty carefully written and that they match the evidence that I’ve spent a lot of time reviewing. And so, I intend to support both articles,” Lamb told WESA in Pittsburgh.

Political consultants say these advertising efforts, rather than trying to influence the candidates themselves, are meant to slowly erode their support among voters — hoping, for instance, to dissuade Trump’s 2016 supporters who went for Lamb in 2018.

“They’re designed to say, ‘I know you like this guy, and you think he’s one of you, but he’s not because he’s voting against our party leader, he’s voting against Trump,” said Chris Mottola, a political consultant who works on advertising campaigns for GOP candidates. “They want to peel these partisan Republican votes away from the Democratic incumbent.”

Each negative ad is like a little cut, meant to slowly bleed support for a candidate. If their poll numbers drop low enough, partisan fundraisers may seize the opportunity to mount a robust challenge, and potentially flip the seat.

“What we’re seeing here is the high volume and the cost of the ads because the stakes are very high with impeachment,” said Terry Madonna, director of the Center for Politics and Public Affairs at Franklin and Marshall College, as compared to a vote on health care or tax policy.

Most Americans also say they’re not likely to change their minds about whether the president should be removed from office. The country is split equally on impeachment, according to a NPR/PBS NewsHour/Marist poll from November. An even greater number, nearly two-thirds of people polled, said they couldn’t imagine learning any new information through the impeachment process that would sway them.

“When people know you personally, those TV ads have much less of an effect,” said Fitzpatrick. “The negative ads are tools of division.”

The Pa. state Senate is beginning what could be a long, partisan process of considering whether to force Philadelphia Democratic District Attorney Larry Krasner from office.