While not an official end to the pandemic that has changed all of our lives, Tuesday’s announcements that Pennsylvania will open up completely on Memorial Day and that Philadelphia follows on June 11 is a welcome relief. Delaware and New Jersey have already announced a lifting of COVID restrictions. However, mandatory masking will remain with us for some time, at least until, per Pennsylvania Governor Tom Wolf, the state gets to a 70% vaccination rate for those who are 18 and over. (The governors of New Jersey and Delaware may announce different mandates, so keep up with all the latest on WHYY.) In another update, the city has announced that the Philadelphia Marathon weekend will return at 50% capacity on Nov. 20-21.

The 90th running of the Radnor Hunt Races will happen this weekend, though COVID precautions will mandate some changes. The nation’s oldest foxhunt is a series of six steeplechase races whose proceeds benefit the Brandywine Conservancy. The conservancy has raised in excess of $5 million in the last 40 years. This year, attendees will be limited to ‘party pods’ of their own household members and masks will be part of the elegant fashions traditionally on display.

In conjunction with the Historical Car Club of Pennsylvania, more than 250 restored vintage automobiles from various decades will be on display at the weekend’s open-air car show. Some of the more impressive models from past shows are a Ford Model T from 1913, a Ford Woody Wagon from 1938, a 1958 Chevrolet Impala, and a 1962 Chevrolet Corvette. It’s not just an exhibition; awards for the best-maintained cars in several categories will be handed out.

It’s a garden party and benefit for the Delaware Art Museum. Artists from multiple disciplines, including ceramicist Samara Weaver, watercolorist Kara Hinson and graffiti artist Francesco Iacono, will display completed works and showcase works in progress. The Wilmington Ballet will drop by for a series of short performances and local florists created their own floral sculptures to accompany the artwork. 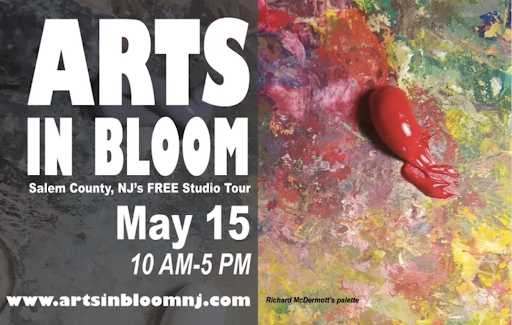 Artists and artisans from multiple disciplines including pottery, jewelry, puppetry, ceramics, weaving and more will display their works to the public via studio visits. The only difference this year is that attendees have the option to view some artists’ studios in person and others via Zoom or virtual booths. The two-day event is free, but registration is necessary for access to both virtual booths and in-person tours. COVID protocols will be observed for in-person tours. Another studio tour weekend is in the works for Oct. 16 and 17 and is expected to be fully in-person.

2021 Styer’s Festival of the Peony

In the early 20th century, botanist J. Franklin Styer believed in the power of peonies so much so that, according to his namesake company’s history, he bred them with maximizing their beauty in mind. He also had to sell them to a public on the East Coast then unfamiliar with the expansive blooms. It’s fair to say he succeeded, as peonies are now ubiquitous in flower displays, bridal bouquets, and in-home decor. This month, they are on display at the annual Styer’s Festival of the Peony, where you walk or drive through the 120-acre property. And, you can take home a bloom, bouquet, or even a bucket of peonies.

If Grammy winners Billie Eilish, Megan Thee Stallion and Diplo, along with multiple-Grammy nominees Tame Impala and The Killers aren’t enough to get you excited about the return of live music festivals to the region, we’re not sure you have a pulse. Delaware’s largest music festival usually happens in June, but was moved due to COVID. It is the second major festival to announce its return as New Jersey’s XPoNential music festival will be back in September just a week earlier. Firefly is offering a pre-sale on tickets Friday, May 14, before the official sales start on Monday, May 17, via this link. We’d suggest you pick those tix up ASAP.

No, there won’t be a Pride Parade or Pridefest in 2021, but that doesn’t mean there won’t be a celebration of Pride Weekend. The towns of New Hope and Lambertville combine as they normally do with celebratory events including a kickoff event, a movie screening, an art exhibit, a best cocktail contest, and other events happening through May and June.

Ardmore Music Hall has reopened to live concerts but with capacity limits, likely to expand soon as the state opens fully up for business. In the meantime, tickets are sold out for the Talking Heads tribute band in-person shows on Friday and Saturday. Fortunately, on Saturday, you can watch Start Making Sense’s set via livestream. The 7-piece band, with frontman John Braun appropriating David Byrne, has won fans like Talking Head and P-Funk keyboardist Bernie Worrell, who called the band a “great representation” of the groundbreaking new-wave group.

Americana artist John Bryne, a Dublin native currently residing in Philly, will perform his own work, along with folk and Irish classics, at his show on Friday night. His latest album “A Shiver in the Sky” was released in 2019. Heralded jazz chanteuse Natalie Douglas will perform the music of Roberta Flack in her Bucks County Playhouse debut on Saturday night and Sunday afternoon.

This Camden woman began losing her sight. Quilting gave her a new vision

In her first solo exhibit at a community art gallery in Camden, Renata Merrill shares the quilts that helped bring her "back to health."

Funeral services to be held for Fairmount fire victims on Monday

Temple University will host funeral services for the 12 victims of the Fairmount rowhouse fire. The families have asked everyone in attendance to wear white.

As Mummers Parade returns to mark 2022, Philadelphians hopeful for the new year

Thousands of mummers strutted down Broad Street Sunday. Though COVID-19 continues to surge, parade-goers said they have much to look forward to in 2022.