Roughly 25,000 fewer children in Pennsylvania are benefiting from a program that helps low-income families find affordable child care compared with before the coronavirus pandemic, fueling concerns about the loss of vital support systems for parents.

Enrollment has reached a record low during the past two years, according to the Wolf administration. And while it’s unclear where those tens of thousands of kids are now receiving care, the decline suggests low-income parents — and particularly women — continue to face the painful choice between earning a paycheck or looking after a child.

“There’s no reason to think it’s down because all of a sudden everyone’s doing just fine and doesn’t need any help finding child care or affording child care,” said Elliot Haspel, a child care policy expert with the Robins Foundation in Virginia. “Then that means that there are more families whose situations are more fraught than there were before.”

For parents like Gioia Maynor, a single mother who lives outside Pittsburgh, the state’s Child Care Works program has been “a blessing.”

Child care costs often approach or exceed $1,000 a month. The program allowed Maynor to lower the bill for her 2-year-old son’s care by hundreds of dollars a month.

Parents are responsible for copays — Maynor says hers have been below $300 a month — and potentially some other fees. The program even helped Maynor, 38, research which centers could provide the right services for her son, who has a speech delay.

Maynor said she doesn’t have other family members who could help with full-time child care. Without the state program, she likely wouldn’t be able to work at her current security job at a law firm.

“This program is excellent,” Maynor said. “It gives, you know, hope for single moms and dads.”

Staff shortages, high costs and Covid closures are straining an already broken child care system. Today, how our patchwork approach fails America's youngest and how to fix it.

But while Maynor and her son have benefited from the program, experts and advocates are trying to figure out why fewer families are taking advantage of it. Enrollments in Child Care Works decreased from about 114,000 in March 2020 to less than 89,000 in January 2022, the Wolf administration said in recent budget documents. That’s a 22% drop.

Those figures include children who are enrolled in more than one child care provider, according to a Department of Human Services spokesperson. But monthly reports on the number of individual children served by the program showed a similar decline.

Child care policy experts say many children who were eligible for child care subsidy programs didn’t benefit from them even before the pandemic. The pandemic raised the stakes, forcing many providers to close for months and causing them ongoing difficulties with attracting and retaining staff and maintaining full hours.

While national unemployment rates continue to improve, federal data from January show the number of people in nonfarm jobs was down by 2.9 million compared with February 2020, when the pandemic was just beginning.

Researchers at the Federal Reserve Bank of St. Louis recently examined why the country’s labor force participation rate “remains the lowest since the 1970s,” and found it was due to an acceleration in retirements and an increase in people being out of the workforce for home or family care. At the federal level, an expanded child tax credit — which provided many families monthly payments of $250 or $300 per child — expired in December, and efforts to overhaul the country’s child care system stalled in Congress.

For low-income workers, the choice can be particularly stark because they often have less flexibility to telecommute or change their hours. Not being able to return to work can have lasting implications for individuals and the economy, according to C. Nicole Mason, president and CEO of the Institute for Women’s Policy Research, a national think tank.

The help that’s out there

The Wolf administration says Child Care Works, funded with state and federal money, “makes it possible for low-income families to find reliable child care near their home or work” and provides financial assistance to lower the cost. Participating parents must work at least 20 hours a week or meet similar requirements if they are in school or a training program.

Qualified families can receive thousands of dollars in savings each year. Copays are based on family size and income — not how many kids are enrolled in care. A family of three with an annual income of roughly $20,000 would pay $18 a week, for example. That copay would go up to $65 if the family’s income were around $50,000. A family of four with the same income would pay a few dollars less per week. 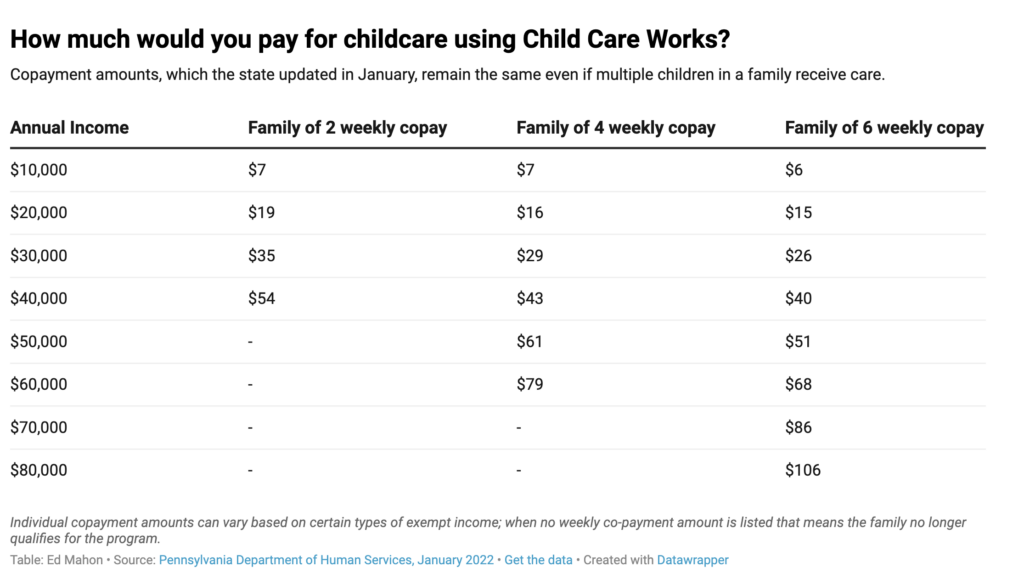 Families apply to the program through a regional center. If they are approved for the subsidy, they then search for a child care facility with openings.

During the pandemic, state officials dedicated hundreds of millions of dollars in federal relief money to the program. Gov. Tom Wolf raised rates for providers twice, including at the start of this year. He also lowered copays for families, saying in October that the state was “investing in equitable quality child care for all Pennsylvanians, no matter where they live or their income.”

But the administration has resisted a proposal from Start Strong PA, a statewide child care advocacy campaign, to spend a few million dollars advertising the program. The push would be similar to what the state does for its Children’s Health Insurance Program. “We’ve got a lot of one-time dollars coming into Pennsylvania through COVID relief from the federal government,” said Jen DeBell, executive director of the Pennsylvania Association for the Education of Young Children, a statewide advocacy group. “We think it’s a good use of money to make sure that Pennsylvanians are aware that there’s help out there.”

Tracey Campanini, deputy secretary for the state’s Office of Child Development and Early Learning, told Spotlight PA and WESA that an advertising campaign wasn’t necessary. Regional centers already do good work spreading awareness of the program, she said, and spending a few million dollars on a promotional campaign would mean the program could serve hundreds of fewer students.

“Advertising is really expensive, and it doesn’t really go that far in terms of what it’s able to do,” Campanini said.

She said her office doesn’t know what’s driving the enrollment drop, or whether the trend is good or bad. Staffing shortages among child care providers are likely playing a role, Campanini acknowledged, but other factors also could be at play, such as the rise of remote work.

“The same level of demand for child care may not exist in all communities the way that it did in the past,” Campanini said.

Before the pandemic, the waitlist for Child Care Works stretched into the thousands. Now that list has shrunk to zero.

But advocates and providers say the public data don’t tell the full story. The industry-wide staffing shortage in child care has led to fewer available classroom spots for kids. That means a parent might qualify for financial help but not be able to find an opening.

Franklin’s staffing problems mean fewer teachers to oversee kids. Enrollment in her center is around 12 children. Before COVID hit, there were about 60 kids in her care. Franklin and other providers say they’re constrained in what they can pay staff because increased fees get passed along to parents. 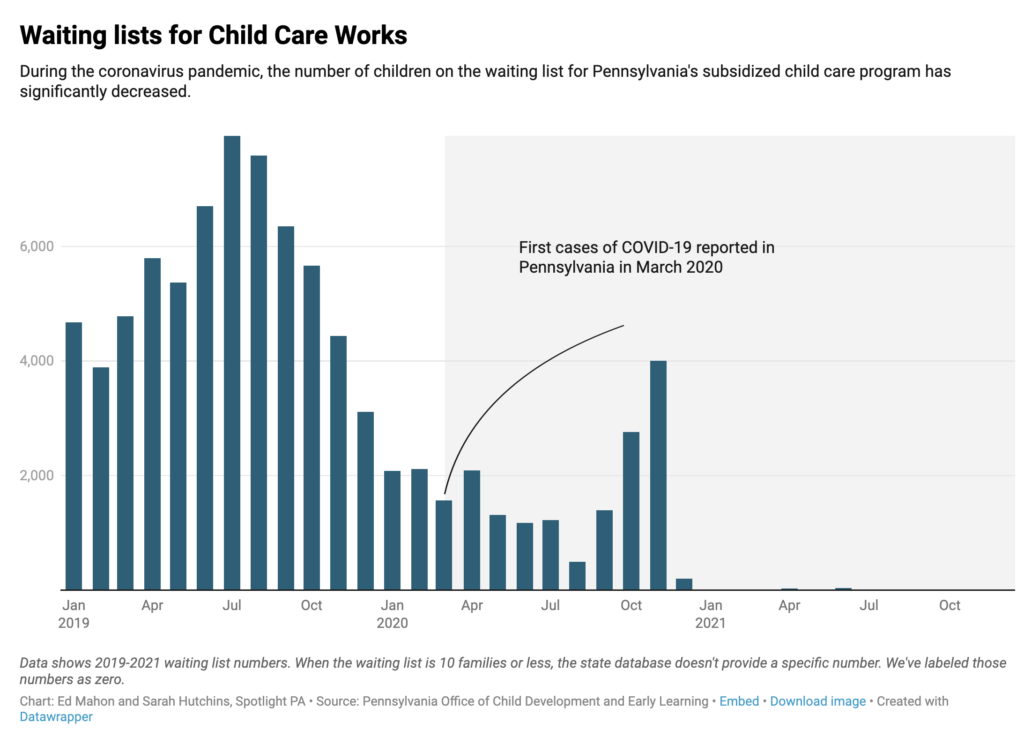 “It wouldn’t be right,” she said. “No one could afford it if I tried to raise the rate.”

Low pay was a problem in the industry before the coronavirus. The median wage for a preschool teacher in Pennsylvania was less than $14 an hour in 2019 and even lower for some other child care jobs. But the situation has worsened recently as other sectors have increased their wages to attract workers.

A September survey of more than 1,100 Pennsylvania child care programs found that 92% reported staffing shortages. Providers estimated more than 34,000 additional children could be served if they were fully staffed, according to the survey, the most recent conducted by child care advocates with Start Strong PA.

Federal relief money has helped the state’s child care providers keep their doors open, and some of that money has helped boost pay for workers. But Pennsylvania’s child care industry continues to bounce back more slowly than other parts of the economy. There were 44,200 employees working at child care jobs in December 2021, according to preliminary federal statistics. That’s 4,300 fewer jobs — or nearly 9% less — than two years ago.

Identifying individuals who may have been overlooked for child care jobs in the past is one of several ways providers are trying to solve unprecedented staffing shortages.

She frequently works with adult students who also qualify for help with child care payments. But during the pandemic, Paull said, providers have reduced hours and it’s become even harder for students to find evening and weekend care.

“I pride myself on being able to think outside the box and help students resolve issues,” Paull said in an email, “but the dilemmas that we are facing in the child care system are nearly impossible to resolve.”

At Butler County Community College, KEYS program facilitator Karen Jack said a mother of four children began looking for child care about seven months before the start of this semester. The woman spent months waiting for openings for her kids, and ultimately decided not to attend school.

“It just became too hard,” Jack said. “In our area, there were a lot of centers that weren’t taking new children because they didn’t have staff.”

Jordan Klingensmith, 24, began classes at a Butler County Community College campus in January as part of the KEYS program. She hopes to someday become a registered nurse.

She and her boyfriend are raising two children under age 5 together in Lawrence County. Her boyfriend doesn’t have a job and handles child care. Paying for rent, bills, and clothes for the kids all takes a toll.

She is interested in child care assistance programs but said any work requirements could create an additional hurdle. They can’t afford child care on their own, but she said it’s hard for her boyfriend to start a job without first having child care.

The state’s public assistance programs allow some flexibility for work requirements but can be difficult to navigate, according to Peter Zurflieh, an attorney with the Community Justice Project, a statewide legal aid group. A lack of child care can cause lasting damage, Zurflieh says, especially for people with lower incomes.

“The difference,” Zurflieh said, “is that if you’re a low-income person and you can’t get access to education and training to get a good job, or you can’t take advantage of a job opportunity, you remain in poverty.”

New maps will help decide where up to $1 billion in federal money goes for Pa. broadband expansion

Pa. must first resolve a basic and yet surprisingly thorny challenge: pinpointing where high-speed internet is still unavailable.

The business of volunteer fire companies has become harder to sustain. Can collaboration help?

Five volunteer fire companies are participating in a state study to determine how better collaboration among them might alleviate some cost and staffing challenges.