Opposition to New Jersey’s coming surge in offshore wind farms is growing at the Jersey Shore.

The hundreds of wind turbines due to be built up to 20 miles off New Jersey in the next five years or so will spoil ocean views, undermine local economies and hurt wildlife while boosting the profits of overseas developers, critics say.

These opponents reject claims by wind farm builders and their enthusiastic supporters, including Gov. Phil Murphy, that the clusters of turbines are emissions-free. The manufacture and maintenance of the massive steel structures will require huge amounts of fossil fuel-powered energy, they argue.

They also say they fear that the tourism-dependent economies of many Shore towns will be damaged if visitors flee because they don’t want to look at an array of wind turbines on the horizon, or if the new structures disrupt marine life so much that recreational and commercial fishermen stay away.

And if fewer people want to spend time at the Shore, real estate values of coastal properties will drop, the critics predict.

“If people decide they don’t want any part of coming here, they will go elsewhere,” said Suzanne Hornick, administrator of SaveourshorelineNJ, a Facebook page that’s dedicated to opposing the industry, and has about 3,100 members.

Hornick, who lives in Ocean City, said she fears the town will be devastated by wind farms. “If tourism, and recreational and commercial fishing collapses then our restaurants collapse and our schools go to hell and the next thing you know people move off the island, and you have no community at all,” she said.

Critics are focused on Ocean Wind, a planned wind farm that will consist of about 100 turbines about 15 miles off Atlantic City. The project, New Jersey’s first, is due to generate 1,100 megawatts (MW), or enough to power about 500,000 homes, starting in 2024.

The developer, Denmark’s Ørsted, says visibility of the turbines from the shore will depend on atmospheric conditions. But Hornick said Atlantic City’s tallest building, the former Revel casino, is clearly visible from Ocean City, 16 miles away, or about the same distance as the Ocean Wind turbines will be from the Jersey Shore.

Afraid the turbines will be eyesores

At some 850 feet tall, the turbines planned for Ocean Wind will be higher than the 735-foot casino building, and so will be an eyesore on the horizon, she said.

At night, the wind farm will be lit to warn ships and air traffic of their presence, and that will be another visual violation, Hornick said. “These things are going to be so brightly lit, it’s going to look like an industrial park. The days of moonlight beach strolls are gone, and that’s not OK with us.”

But the visual impact could be reduced using lights that only come on when they are activated by radar from nearby ships or airplanes, according to Atlantic Shores, another project planned for an area between Atlantic City and Barnegat Light on Long Beach Island. That project, a 50-50 joint venture between Shell New Energy and EDF Renewables, is being reviewed by the Board of Public Utilities, and could generate up to 2,300 MW starting in 2027.

The two New Jersey projects are among 15 that are currently proposed for the northeastern and mid-Atlantic coasts. On Monday, the federal Bureau of Ocean Energy Management said it has completed its environmental review of Vineyard Wind, an Ørsted project off the coast of Massachusetts that is likely to be the first U.S. commercial-scale wind farm to begin operating. Advocates said the announcement was a sign that the Biden administration is serious about kick-starting the offshore wind industry after years of delay. 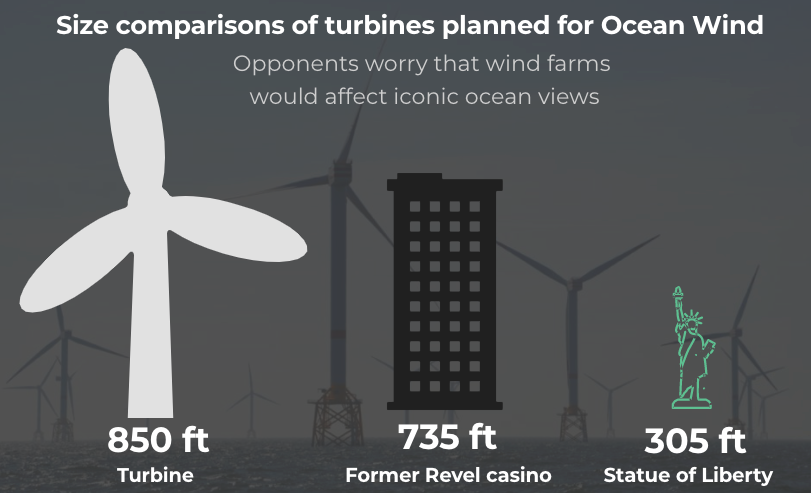 Seven East Coast states including New Jersey have committed to buying more than 28,000 MW of offshore wind power in the next 15 years, and some power-purchase agreements such as that for Ocean Wind, have been signed.

Asked how the European offshore wind industry has been able to overcome any environmental or economic problems since becoming established some 20 years ago, Hornick said she believes that Europeans are more likely to accept what their governments tell them than are Americans.

N.J. has the most affordable-housing units exposed to sea-level rise, report says

Atlantic City, Hoboken and Camden among the most vulnerable to climate effects.

Despite concerns about damage to tourism, research from the University of Rhode Island into the effects on tourism of a small wind farm — the first of its kind on the East Coast — that has been operating off nearby Block Island since 2016 found that occupancy and revenue increased on the island after the wind farm was built because visitors wanted to see it for themselves.

And a University of Delaware study last year found that tourists have fewer problems with offshore wind farms the further away they are. Twenty-nine percent said they wouldn’t visit the beach if turbines were 2.5 miles away but only 5% said they would be put off if the farm was 20 miles away — the outer limit for the Atlantic Shores project.

For Ocean Wind, the power produced will be about 1/7 of the 7,500 MW that Murphy has set as New Jersey’s target for offshore wind power by 2035. That means the approximately 100 turbines slated for that project would be only a fraction of the total that will be built off the Shore over the next 15 years if Murphy’s target is hit, Hornick said.

Along the entire Jersey Shore, she fears that up to 800 turbines would be needed to generate the required power, and she predicted that would turn the state’s offshore waters into a kind of industrial zone that will drive people away from the Shore.

Backers of offshore wind say any visual or environmental drawbacks are more than offset by the unlimited amount of carbon emissions-free electricity that would be generated by the turbines, helping states like New Jersey cut their production of greenhouse gases.

But critics say offshore wind energy is far from emissions-free after the energy taken to build and maintain them is factored in. The enormous Haliade-X turbines — currently the world’s largest — to be used for Ocean Wind will use millions of tons of energy-intensive steel to build and will then require fossil fuel-driven ships to assemble the components at specially built ports, before installing them offshore, and then making frequent trips for maintenance.

The onshore centers will include a new Wind Port, a state-owned facility in Salem County where turbine components will be marshaled, assembled, and shipped out to sea.

“There’s no way this is emissions free,” said Tony Butch, a recreational fisherman who belongs to Hornick’s Facebook group.

Atlantic Shores acknowledged there will be “some emissions” from manufacturing, installation and maintenance but said they are outweighed by environmental benefits during the approximately 20-year lifetime of an offshore wind farm. The company said it will work to reduce emissions where possible using innovative approaches such as green hydrogen as a fuel source and electric vessels.

‘The river’s gonna seek its own course’: Experts take a new look at easing floods

Traditional systems are designed to manage or redirect water. Natural solutions capture and absorb rains. The issue: predicting the unpredictable.

Concern over effect on fisheries

Butch argued that the power-purchase agreement signed by Ørsted with New Jersey’s Board of Public Utilities for Ocean Wind is premature because not enough is known about the environmental impacts of the project, particularly on fisheries.

“There just hasn’t been enough research done in our waters to tell us that it would be safe environmentally,” said Butch, an insurance salesman from Evesham in Burlington County. “To me it feels like the state is putting the carriage before the horse.”

Butch and other critics say dolphins might be deafened by underwater noise during construction, preventing them from finding prey, and that an electromagnetic field (EMF) from the cables used to carry power ashore can interfere with fish migration, disrupting the livelihoods or hobbies of commercial and recreational fishermen.

He said Murphy should have waited for full environmental studies to be completed before announcing a $250 million plant at Paulsboro last December for the manufacture of turbine-tower components. “To me, that says you don’t really care what the environmental impact is,” he said. “It sounds like they are going to make it work no matter what.”

Gabriel Martinez, a spokesman for Ørsted, said the effects of undersea noise on marine mammals including dolphins will be studied during an official assessment of Ocean Wind’s environmental effects. He said research indicates that individual mammals will swim away from the noise but that the project will use noise-reducing equipment during construction.

“Exposure to noise levels that could cause hearing loss to dolphins is not anticipated to occur as a result of these measures,” he said.

And Atlantic Shores said research shows that EMF from undersea cables won’t harm sea creatures but that its own cabling will be insulated and buried 6 feet below the seabed to reduce EMF.

Critics also say that birds will be killed by rotating turbine blades. But Eric Stiles, president of New Jersey Audubon, said that any bird casualties from offshore wind would be greatly exceeded by the effects of climate change such as floods, fires and habitat loss, so concerns about birds colliding with turbines should not prevent aggressive measures to boost clean energy.

“The default that we live in is immediately threatening the survival of birds,” he said. “This is about increasing the likelihood of species survival.”

Jim Donofrio, executive director of the nonprofit Recreational Fishing Alliance, rejected Murphy’s argument that offshore wind is good for the environment, the economy and the future. “Those three points we challenge him on because if you destroy the fisheries and you destroy our ecosystem out here and that’s not good for the economy down here at the Shore because it’s driven by so much boating and fishing,” he said.

Donofrio said Shore municipalities should consider denying any attempt by Ocean Wind to bring undersea cables ashore in their towns. A spokesman for the BPU wouldn’t say whether towns have the authority to do so but said “multiple” sites for connecting the project to the grid are being considered, including Upper Township in Cape May County, Atlantic City, and Oyster Creek in Lacey Township, Ocean County.

“They will be refining their interconnection plan as the project further matures and will continue to coordinate with [grid operator] PJM and local municipalities,” the BPU said in a statement.

Meanwhile, Donofrio signaled that Murphy’s offshore wind policy could become an issue when the Democratic governor stands for reelection in November.

“We’ve got a governor who is from Massachusetts. He has no love or concern for the Jersey Shore. This guy, he stays above the Raritan Bridge; all he cares about is north Jersey, and he doesn’t even care or know about our Shore,” said Donofrio, a former charter boat captain.

“We’re six months away from maybe getting a new governor — somebody that was born and bred here. Whether it be a Republican or Democrat doesn’t matter to me as long as he’s for keeping our Shore the way it is and our fishing the way it is,” he said.

Murphy’s campaign office did not respond to a request for comment.

Dead whales have been found in Atlantic City, Strathmere and Keansburg in New Jersey, and Rockaway Beach and Amagansett, New York.

The Jersey Shore landmark underwent a 15-month-long exterior restoration to replace the metal skin that had degraded beyond repair.

The Rehoboth Beach commissioners offered an update Tuesday on a pair of offshore wind projects proposed off the Delaware coast.