Community representatives met in Atlantic City yesterday to explore ways to improve the lives of youngsters in the struggling seaside resort after a survey revealed that nearly half are not fully prepared to face life’s challenges.

The city school district contracted with Search Institute, a Minneapolis-based nonprofit, to survey students in grades 4 through 12 at the urging of last September’s Transition Report, which recommended that Atlantic City remain under state control through 2021.

That report called the city’s 10,000 children 18 and younger, more than a third of whom live in poverty, “the forgotten citizens” and called for assessing the quality of life for children.

“Early on we learned children in the city suffer from a great deal of trauma,” said Jim Johnson, special counsel to Gov. Phil Murphy, who led the review of Atlantic City. “It was clear to us that there is a lack of afterschool programs. We even heard many children suffered mental distress.” A month after his team began its work in the city, a child committed suicide, Johnson said.

Taking a look at ‘developmental assets’

The resulting survey looked at the “developmental assets” available to the youths, including how much support they get from families and neighbors, how safe they feel, whether they have boundaries and how they use their free time.

It found that 14 percent of young people are thriving and 39 percent have adequate assets, meaning they have the tools needed to make good choices and succeed. That leaves 37 percent vulnerable and 10 percent challenged or fragile.

“These scores suggest there is considerable room to improve your young people’s experience,” the report states, adding that is not an unusual finding. “The challenge is to find the specific ways you can make a difference.”

Some 60 community members and representatives of such organizations as the Boys and Girls Club began to look for ways to improve life for the city’s young on Thursday during a training session sponsored by the state Department of Community Affairs. They explored the survey results and began to discuss the addition or improvement of youth programs.

“Atlantic City’s young people are full of promise and deserve expansive, dynamic opportunities to realize their potential,” said Lieutenant Governor Sheila Oliver, who is also the DCA commissioner. “This survey and today’s training will go a long way to helping the community develop programs that enrich the lives of the city’s children and young adults so that they develop into future leaders and innovators.”

Results of the survey

Overall, the students scored lowest in the measure of having a constructive use of free time, followed by having a positive self-image. Specifically, more than 20 percent of Atlantic City youngsters reported little to no involvement in church or religious activities, sports or clubs or in music or the arts. And only one in four reported they almost always feel valued and appreciated by others.

“In very broad terms, the survey shows there is a need within the community for constructive things for young people to do in their free time,” Johnson said. “There is a need for much more of a sense of connection with the community.”

The survey suggests that one group in particular that city officials and organizations should be looking at is children in grades 8 through 11. They had the highest percentages of those scoring as challenged by the survey. Almost a quarter of 10th graders are considered challenged and only 6 percent of 9th graders are thriving. 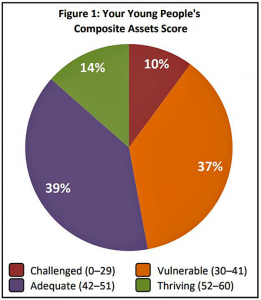 The survey makes clear that after-school and summer programs are critical to curbing youth engagement in at-risk behavior. But according to the transition report, in addition to cuts in after school programs due to the city’s financial crisis — brought on in part by the recent recession and the closure of five casinos — summer jobs “were hard or impossible to land.”

Johnson said he thinks the survey and training “will provide the basis for creative, constructive programming for the young people of Atlantic City.

“It goes without saying that the city’s most precious resource is its young people, and one of the city’s highest duties is to ensure their welfare,” Johnson continued. “We are committed to doing what we can to help them thrive and succeed.”

Funding many new programs could be difficult as the city continues to get its finances in order, however, so organizations may need to revise existing offerings to make them more attractive to and impactful on young people.

There was some good news in the survey. Almost three-quarters of students said they feel extremely safe at home and a similar proportion reported that their parents try to help them succeed.

This is just the latest effort by the Murphy administration to improve Atlantic City, which the state took over in late 2016 to prevent the seaside resort from slipping into bankruptcy. Last month, the DCA released an implementation plan prepared by Johnson and others that spells out specific strategic recommendations, such as further reforming city government and finances, improving public health, and revitalizing neighborhoods, as well as timeframes for accomplishing each goal.

The New Jersey wind port in Salem County won't open until 2024, but the site already has its first tenant.

To mark the 54 years since Rev. Dr. Martin Luther King, Jr. was assassinated, activists from across New Jersey will march for voting rights and economic equality in Newark.

The Atlantic City Expressway has put out a request for proposals for cashless tolling on the highway, which could be in place by 2025.