From dog masks to subway pillars, the Philadelphia Eagles’ trip to the Super Bowl has been full of memorable moments that may finally help fans shed their most notorious and unshakeable descriptor, as brutes brazen enough to pelt Santa with snowballs.

But none of those moments, arguably, was as bizarre as the grease pole.

After a few “Crisco cops” slathered the slippery shortening on utility poles in a failed effort to keep joyous fans from climbing them, Philly sports fans have become so synonymous with grease poles that Crisco sent thank-you cookies to city police for boosting their brand. And Minneapolis Mayor Jacob Frey joked in a video welcoming Super Bowl visitors: “For the Eagles fans, don’t worry. We’ll be greasing all the lampposts, so you’ll feel right at home.”

While Philly police still want fans to stay on the ground this weekend, Michele Gambino has a different suggestion: Go ahead and climb away — but just wait until May.

“Come on down May 20th, and climb our grease pole, because we literally have the only grease pole in the city that you’re allowed to climb,” said Gambino, who produces the annual Italian Market Festival on Ninth Street.

Philly folks eager to shimmy up a slippery pole coated in pungent pig lard can do so with the full approval of police at the festival’s third annual Grease Pole Climbing Competition. Organizers require would-be contestants (adults only!) to sign a liability waiver and prove their sobriety with a Breathalyzer test, Gambino said.

The contest resurrects an old Italian tradition, called albero della cuccagna, in which climbers scale a slick pole to reach prizes — including cash, cheese, and cured meats — at the top.

The contest was a festival staple for years, until it was derailed by liability concerns and the festival’s years-long hiatus for streetscape improvements, Gambino said.

Frank Longo grew up at 9th and Montrose streets, where the festival’s 30-foot grease pole now stands, and remembers climbing it as a kid. 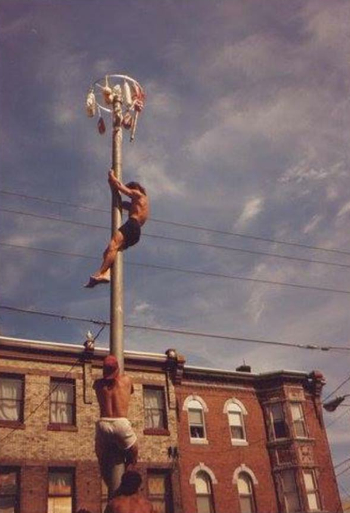 Frank Longo nears the top of the pole in the 1993 competition at the Italian Market Festival. (Photo provided)

“Growing up in the city, we were always climbing around. Climbing is just second nature in the city — we had a lot of awnings to run on,” said Longo, now 48 and a three-time grease pole champion. “We could get up the poles any time with no grease on them. But the grease pole was a challenge because it had grease on it.”

For Eagles fans who can’t wait until May to scale a lamppost, grease pole pros say it requires strategy and teamwork — concepts that might elude fans whipped into a frenzy by football glory and too much booze.

“There is an art form to it,” said Gambino, who has never ascended a pole herself but has presided over plenty of climbs. “Only one person has to climb to the top, but it takes a team of about 20 to 30 people to get him there.”

The most successful climbers form a human ladder, like cheerleaders in formation, and send a smaller climber to the top with towels to wipe the pole clean, Gambino said. Climbers also wear socks on their hands and feet to scoop away the grease.

“The idea is to work the lard off the pole, so you can then get traction to get to the top,” she added.

That can take hours — and it’s stinky, sticky business for those at the bottom, who are essentially showered with chunks of lard.

Hometown lard, by the way. Gambino gets the festival’s supply from Cappuccio’s Meats in the heart of the market.

“There’s no real secret,” said Longo, a union carpenter and married father of one. “Here it is: I’m in good shape. You lock your legs in, and, on your way up, basically, you’re scraping off the lard.”

Longo said his Facebook page “blew up”  with friends wanting to reminisce about his grease pole conquests, after news circulated of the police department’s efforts to foil pole-climbers.

“It’s kinda funny — my friends mocked me, saying, ‘For all the things you’ve done in life, you’re known for climbing a greasy pole,’” he said. “Now, all of a sudden, everybody is interested in this greasy pole stuff.”

For fans eyeballing poles this weekend, Longo advised: “Climb on, baby — and enjoy it. But don’t get in trouble, and listen to the police when they say get down.”

Gambino hopes the hubbub will lure more people to the two-day Italian Market Festival during the third weekend in May. (In the meantime, the market will hold a pep rally from noon to 3 p.m. Friday — at the grease pole, of course — with a few former Eagles, including David Akers and Bill Bergey, on hand for photos and autographs.)

“I want to thank the police department, because they’ve done such a great job at publicizing this grease pole,” Gambino said.

And after the Eagles win? (BECAUSE OF COURSE THEY WILL.)

Gambino hopes to see plenty of police at the festival — but not just for security’s sake.

“Maybe a team of police would like to come and climb the grease pole. Maybe challenge the Eagles fans,” she said. “That would be awesome, and really bring the city together.”

Anti-violence initiatives in the city will be evaluated, to make sure the funding is getting to those most at risk.

No longer a victim: How one survivor dealt with Philadelphia’s gun violence

Oronde McClain, who was shot in the head at age 10 in Philadelphia, shares his story with WHYY host Cherri Gregg.