By day, Michael Kalmbach is the founder and director of the Creative Vision Factory, on Shipley Street in Wilmington. When he isn’t working to help others through art, Kalmbach makes time for his own art.

Painting in his studio, Kalmbach loses all sense of time and self. His latest work invites viewers into his “Vibe Realm.”

One of Kalmbach’s favorite musicians/artists is rapper Riff Raff. “A few years back he shared this meme where ‘vibe realm’ was mentioned,” Kalmbach said. The meme was an image of kids going off through a portal through time and space. “I just kind of clung on to that phrase.”

For Kalmbach, time in his studio is like- to keep the sci-fi references going- a dimensional pocket where Kalmbach said, “I lose sense of my self, lose sense of time.”

Kalmbach is really interested in time and space and portals and that is reflected in the work. “I think the work kind of creates that kind of transcendent experience.” 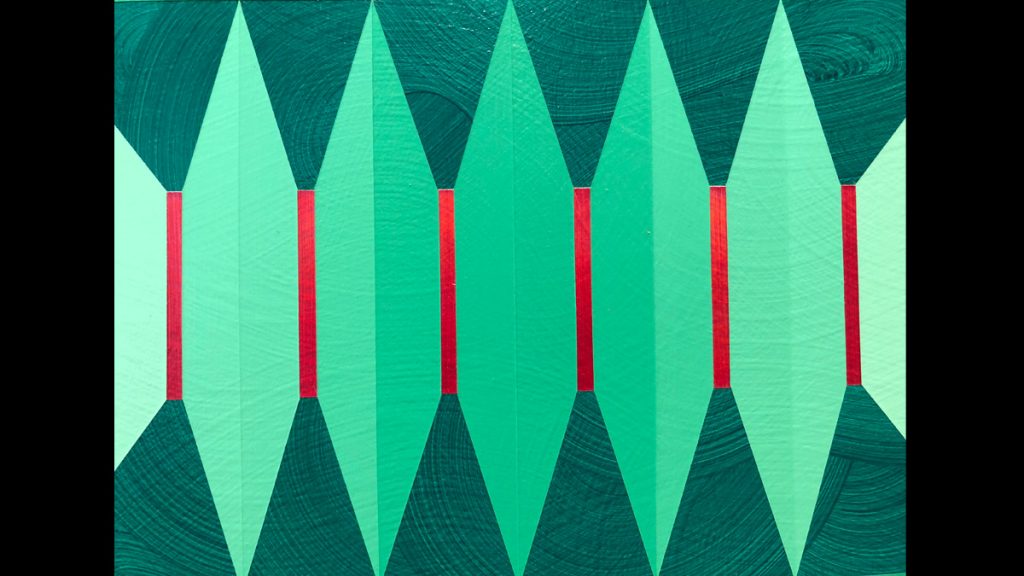 One big difference in this exhibit is the lack of some kind of political or societal concerns contained in it. The art isn’t meant to cure any of society’s ills. Kalmbach spends enough of his time working to those ends for his day job. As the founder and director of the Creative Vision Factory in Wilmington, Kalmbach helps people with substance abuse or mental issues work through their problems via art.

One of the things Kalmbach talks about at the Creative Vision Factory is having a creative practice “as this site of resilience, as this meditative space that can really make you resilient.” Painting gives Kalmbach a chance to “actually practice what I preach, to make a case for the individual studio practice.”

Kalmbach believes it is really important to have that zone where you can plug your brain into it and hopefully, “create more clarity.” 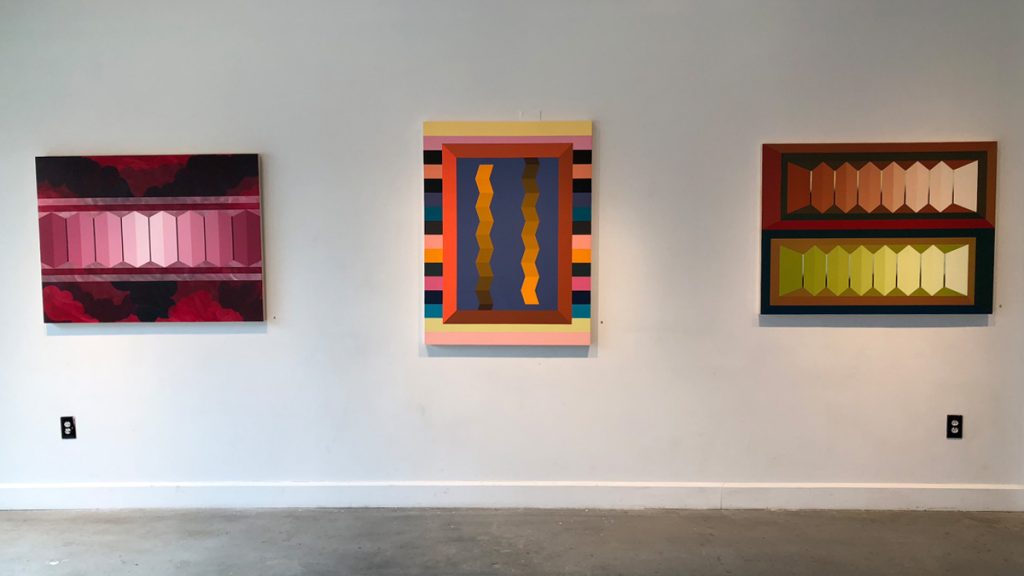 Getting into the studio to create and shut out the outside world and all of its concerns is really like a private retreat for Kalmbach. “A meditative, contemplative space where I can put my head back together so I can continue to serve Shipley Street.”

Kalmbach’s “Vibe Realm” is not content driven. It’s merely the result of “a lot of really idiosyncratic interests that I’ve developed throughout 20 years of making paintings.”

"It's not solving any kind of social political issues, it's not really content driven other than a lot of really idiosyncratic interests that I've developed throughout 20 years of making paintings."
-Michael Kalmbach

So lets talk about the paintings which are on view now through April 27th at the Chris White Galleries in Wilmington. The entire body of work in this exhibit is abstract. Color, texture and forms were the primary focus for Kalmbach going in, but it starts with color. “I usually start each picture with something I want to explore with a color, see how much I can stretch a color.”

The forms you see were chosen to help express this stretching or bending of the colors. “Some of the forms too are really playful,” Kalmbach said. 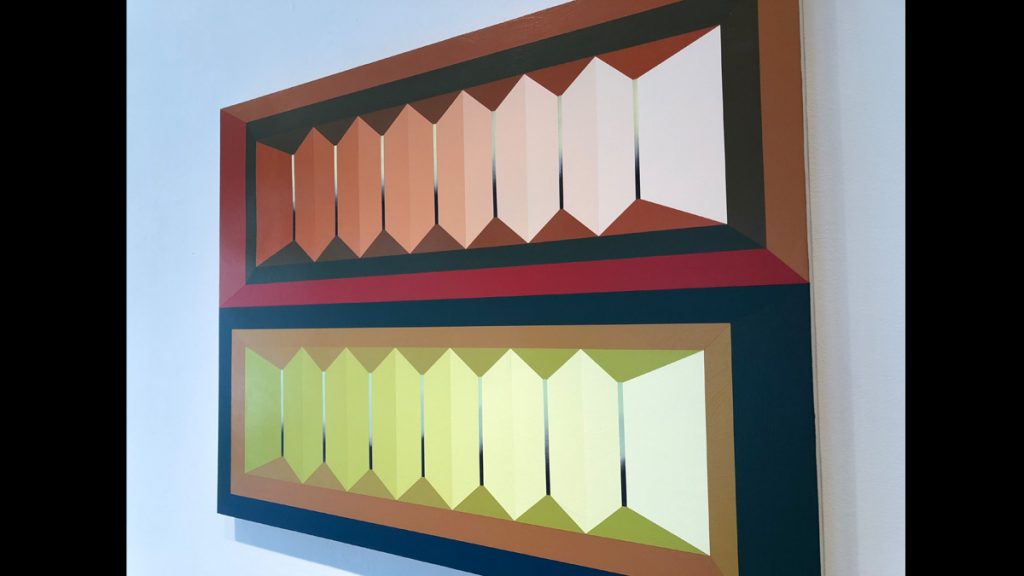 While viewing some of these playful forms, people of a certain age will perhaps be thrown back to their time in the 80s playing video games, or one game in particular: Excite Bike. When viewing the work,  some of the forms look like doors or passageways. Those forms were pulled from the ramps in the classic Nintendo game Excite Bike. “You have this kind of sense of dimensionality and space and air, so that form is kind of like teased out from that game.” 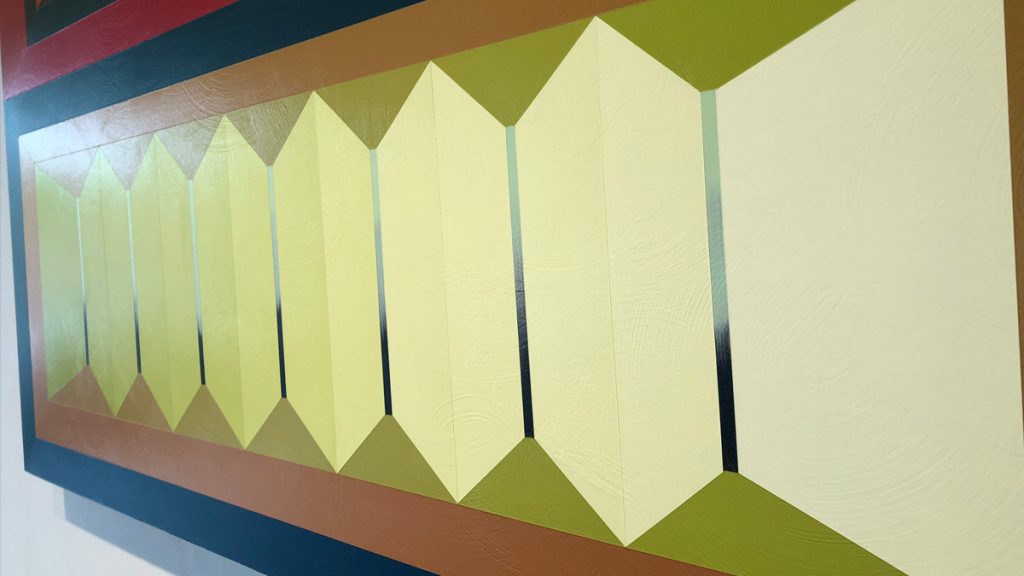 Beyond the video game reference, which you may not see, I had the benefit of Kalambach telling me the story after all, there is more to see and take away from the work.

Kalmbach wants you to question how he did it, but beyond that, “The more and more people come and investigate the surfaces, there’s a lot of information that the surfaces of the paintings will continue to give back to you.”

Texture plays a very important roll in Kalmbach’s work, going all the way back to high school. When he started painting around age 16, he was focused on the color and geometric abstraction. “I remember having a lot of focus on trying to eliminate all evidence of my hand. I wanted these things to kind of appear manufactured.” 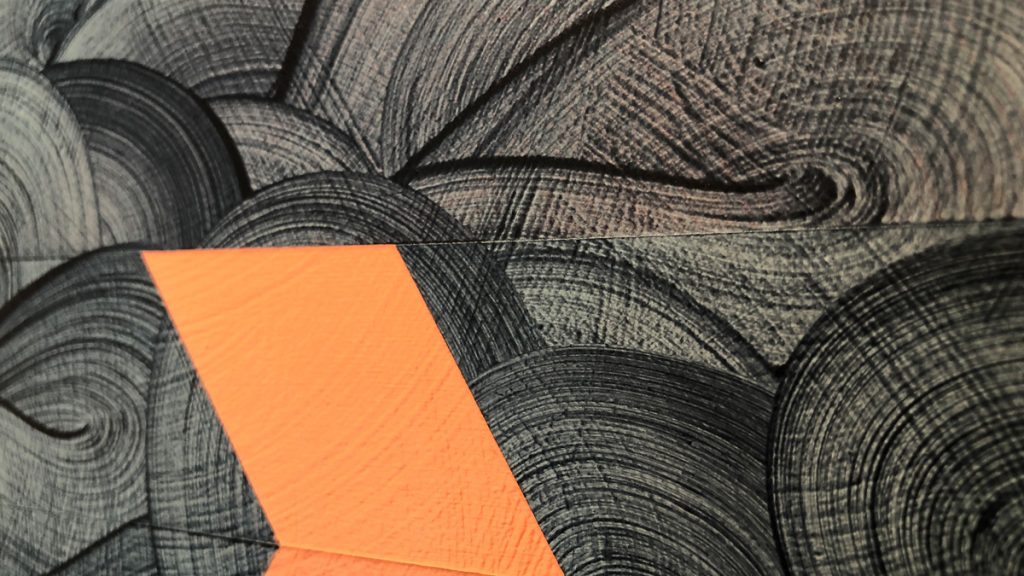 In many ways, these new works have a manufactured look to them from afar. Get up close though and that’s where you see the human element in the form of the brush strokes. “The surfaces on all of these are built up with a lot of texture, texture forgives, texture creates a surface where it can hide a lot of those little imperfections.”

Kalmbach believes these current works look a lot cleaner now that he isn’t so focused on making such a pristine surface.

As you view the work, take the time to really look into it, Kalmbach said. “I really hope that the works can hold people for some time and that they can give themselves that time to kind of just explore the surface.”

From there Kalmbach hope you can, “go to [your] own vibe realm.”

The posters, designed by Philly artists and the small businesses that inspire them, will be placed in commercial corridors across the city, just in time for holiday shopping.