An intense wind from the west frothed the Delaware Bay and tore at the signs activists held as they gathered on the beach near the East Point Lighthouse, which has marked the mouth of the Maurice River since 1849 in New Jersey’s Cumberland County.

The small, well-bundled group that gathered near mounded white sandbags on Saturday, Nov. 10, believe that the historic building is in imminent danger of falling into the river. They want the state to take action to protect the lighthouse, preferably with a seawall along the perimeter.

Nancy Patterson, the lighthouse manager and president of the nonprofit Maurice River Historical Society, had organized the demonstration, trying to address a problem she believes is near a crisis point. The historical society has managed the lighthouse since the 1970s. The building and the land are owned by the state of New Jersey, part of the Heislerville Wildlife Management Area under the state Department of Environmental Protection.

“I’m just trying to get the attention of the DEP and or the Army Corps of Engineers so that they would actually take action out here and not just talk about it or tell us that we’re on the list or whatever,” Patterson said. “We need something done now, not a year from now or even in the spring,” said Patterson. She believes drastic action is needed, and soon. 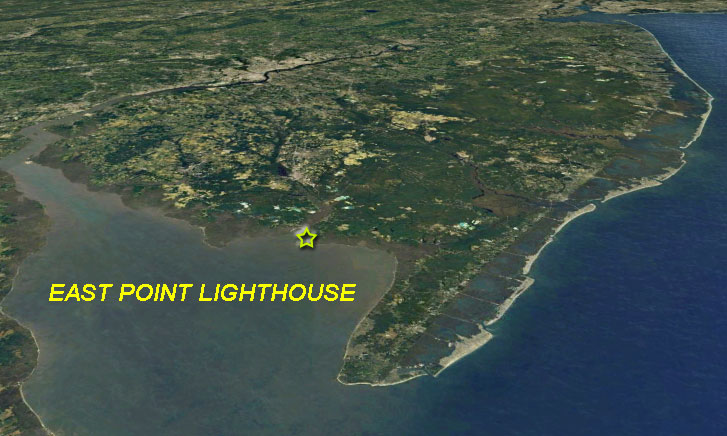 “It’s clearly in a precarious position,” agreed Lawrence Hajna, a spokesman for the DEP, contacted after the demonstration. “Right there at the mouth of the river, it’s got the bay on one side and it’s surrounded by wetlands.”

According to Hajna, the issue has the DEP’s attention. Officials are working on plans for the interim and the short term. A long-term plan is also needed, but he suggested that is going to take even more work and consideration.

“We know sea levels are rising. Storms are going to become a bigger concern as time goes on,” he said.

Hajna did not rule out constructing a seawall. He didn’t promise one, either.

State officials plan to meet with representatives of the historical society and other stakeholders this week to look at options, Hajna said on Tuesday. He did not expect that meeting to be open to the public.

Once known as the Maurice River Lighthouse, the lighthouse was inactive for decades, starting during World War II, and was badly damaged by fire in 1971, according to a history posted by the Lighthouse Friends group.

The Coast Guard reactivated the lighthouse in 1980. The exterior was renovated in the 1990s, and the interior restored much more recently. In 2016, an $852,000 reconstruction project included replacing the roof, renovating the interior and more. According to Patterson, boat captains still use the light and the bright red roof to navigate in the bay.

The Friends operate the lighthouse like a museum, set up to look like it did a century ago when the keeper and his family lived there. Patterson believes the lighthouse can help rejuvenate the local economy. At the last Lighthouse Challenge in October, when enthusiasts try to visit as many New Jersey lighthouses as possible, 1,600 made their way to East Point, and thousands of visitors tour the lighthouse each year.

But for Patterson, saving the East Point Lighthouse is bigger than the lighthouse, she sees the entire Bayshore way of life as being threatened, with riverside communities that once relied on shellfish facing threats from erosion.

Money from the federal infrastructure spending bill will be used to determine how best to shore up the lighthouse, so it doesn’t fall into Delaware Bay.

‘It is not who we are’: Mass shooting near Bridgeton leaves community shaken, but resolved

A young man who survived the shooting said a 90s-themed birthday party became deadly when multiple shooters came through the gathering.

Crews have collected more than 75 tons of oil that fouled Delaware’s coast after a spill near Broadkill Beach two weeks ago.